Trinisa Pitts had some catching up to do. She hadn’t been able to attend the Juneteenth African-American Cultural Festival since it was moved from the Spirit of Jubilee Park on South Avenue to Clinton Square about 10 years ago, making the transition from its traditional location on the South Side to downtown Syracuse.

“I didn’t want to miss it this year,” she said Saturday, June 15, when the main celebration was held. “I also went yesterday to the Juneteenth community gathering at Jubilee Park to listen to gospel music.” 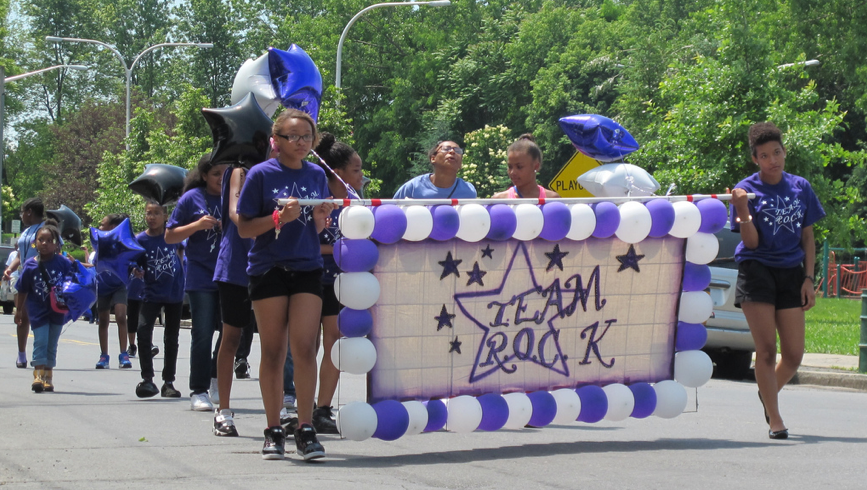 Pitts was in the square staffing a booth to promote books and a desk calendar.

This year’s festival was preceding by the Visions of Victory parade.

The launching pad for the parade was Dr. King Magnet Elementary School at 416 E. Raynor Ave. The gentle chimes of noon announced the beginning of the parade, which got in full swing when it reached the recently renamed Martin Luther King Street East.

The parade was led by a convertible carrying Grand Marshall Mayor Stephanie Miner, who was donning dark glasses and a straw hat to pay tribute to the grinning sun. She was accompanied by her chief of staff, Bill Ryan, doubling as chauffeur. The convertible right behind Miner’s was more loaded. It was occupied by Councilor at Large Helen Hudson and the other Grand Marshall, Pastor Daren Jaime. 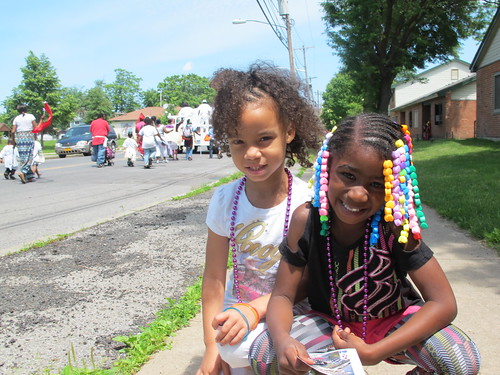 The general atmosphere of the parade was more subdued than previous years as the thunderous clap of the Approaching Storm High Stepping Marching Band from Brooklyn was absent. Drum Pride 315, a band from the Syracuse Elks Lodge 1104, tried to make up for the absence while the counterpoint was provided by the “Van” Wagon, a vehicle in whose flatbed a keyboard player, two wind instrument players and a vocalist were performing Sinatra classics composed by Syracuse native Jimmy Van Heusen. Hence, the name of the wagon.

The exception to the relatively toned-down atmosphere was a dump truck, following a garbage truck in the middle of the parade, both belonging to the city. The driver of the dump truck every other
minute mercilessly blared the horn at an ear-piercing level, which was possibly in violation of the municipality’s noise abatement ordinance. The horn could be heard loudly even four blocks away from the parade.

The parade included three groups from the Southwest Community Center: PRIDE, Team ANGEL and the Mainstream Program. Other marchers came from Together Everyone Achieves More through Respect, Organization, Commitment and Kindness (TEAM ROCK); Inner City Little
League; Dance Theater of Syracuse,; KC-Cuse Line Dance; Mohawk Valley Club of Utica-Rome, and immigrants to Syracuse from the Caribbean island of Grenada.

When the parade reached the corner of MLK East and South State Street, it was greeted by senior citizens of the Central Park Rehabilitation and Nursing Center, comfortably watching from lawn
chairs. Residents of the South Side neighborhoods of Central Village, Almus Olver Towers and Langston McKinney Manor followed suit, cheering on the parade participants walking down South 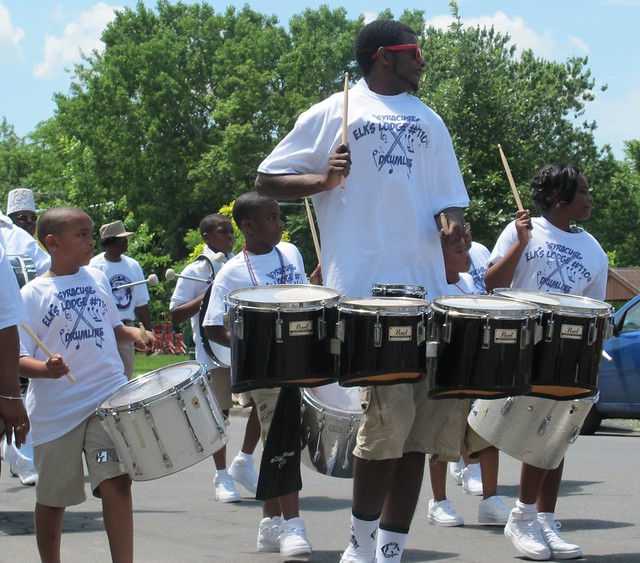 The parade finally made its way into Clinton Square, where Pitts had patiently been waiting for its arrival. In the meantime, she had been advertising her solely authored books “Trinisa’s 365 Day Daily Inspirationals” and “The Essence of Me: Life After the Pain” as well as her two joint publications “Chronicles of a Walk with Christ: A Women of Divine Aspiration Collaboration” and “A Letter to My Mother: A Daughter’s Perspective,” in which she contributed a chapter in each. Pitts was also a guest columnist for the Scotsman Pennysaver weekly newspaper from November until March, when it was shut down by its publisher.

“I’m delighted to see so many people enjoying the festivities,” she said. “I would like to motivate them to move forward.”