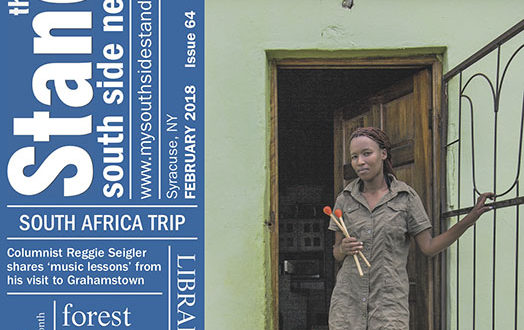 Sometimes you end up traveling miles to get to know someone who’s been working and living just a few blocks away. 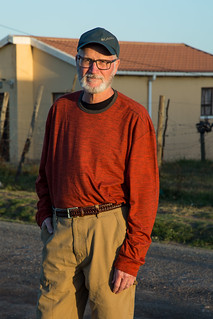 Such was the case over the recent winter break for me when I traveled with a team of students from the S.I. Newhouse School of Public Communications at Syracuse University to Grahamstown, South Africa, for a two-week visit. Our team of eight students and two teachers also included Reggie Seigler, a board member of The Stand who shares some of his own experiences on the trip in this issue, plus six others from the city high school system.

It’s 8,341.15 miles from Syracuse to Grahamstown, according to the website Distance Between Cities. Even traveling at more than 500 miles an hour, it takes about 17 hours by air to get there. The trek from the SU campus to ITC, the Institute of Technology at Syracuse Central, which is home to our high school contingent on the trip? About a mile or so, or .00011989 of the distance to Grahamstown.

I organized and led an SU team of student journalists that visited Grahamstown in 2010, also over winter break, to work on storytelling skills. We had such a good time, and such a productive time, that the only question was: “When will we go back?” This is a complicated endeavor to arrange, but the pieces finally came together for a return trip. We invited the Syracuse City School District to send a group of a half-dozen with us, and I was pleased when administrators said “yes.” They chose Assistant Superintendent Anthony Davis, who is in charge of all the high schools; social studies teacher Kathleen Argus; and four ITC high school students with an interest in storytelling — mainly through photography. 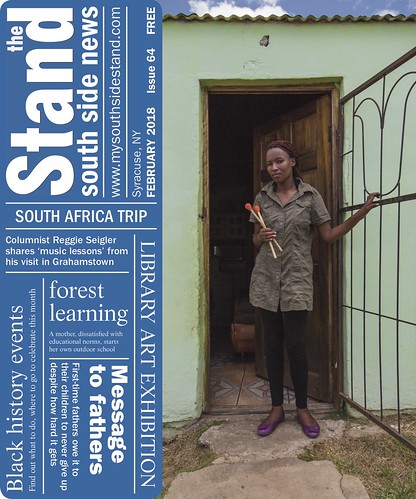 For years, The Stand has worked off and on with ITC students in that school’s media track, and the Newhouse School hosted a group for “ITC Day” two years ago. That six-hour “get to know you” visit was exceeded considerably by our two-week stay in Grahamstown, a city we chose because it is so much like Syracuse. And it has a well-known journalism school at Rhodes University that, like SU, is situated on a hill.

Much of our work in Grahamstown was in the township where the black population is concentrated (and segregated) on the side of the city opposite from Rhodes. Each of the four ITC high-schoolers was paired with a township student participating in a local nonprofit called Inkululeko (“Freedom”) that was created to help township teens do better in classes.

Getting to know — and to watch — the high school group was a special treat, including a visit they made to the mud-and-metal home that one of our local guides built for himself and his girlfriend in six days. Zukisani Lamani got tired of waiting for a government-subsidized home that had been promised, so he built his own. No electricity, no running water, and no indoor plumbing of any kind. It was a home he was proud of, as he well should be. 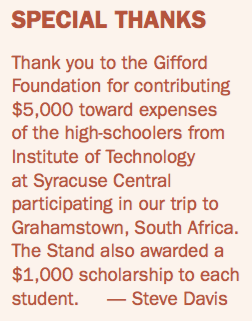 We arranged a number of activities to bring the eight ITC-Inkululeko teens together, but it was a spontaneous round of UNO, the card game, that bridged the gap best.

This print issue — out this Saturday, Feb. 3 — includes short essays from each of the four ITC students, and portraits of them with their Inkululeko partners.

The theme of our two Grahamstown trips has been that no matter where you go — across town or around the globe — you’ll find that people are more alike than different.

Seems the ITC group is on board with that, too.

— By Steve Davis, Founder of The Stand