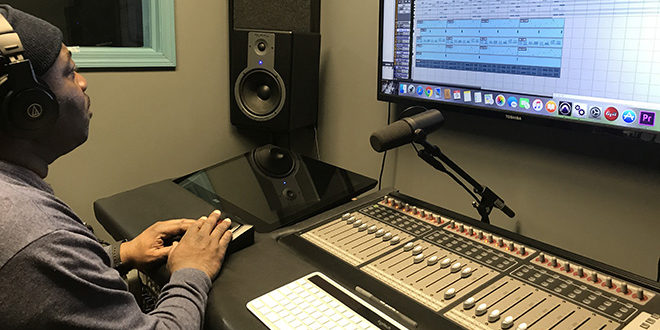 Rob Butler, a producer, works on equipment at Unorthodoxed Studios.

Once a young rapper himself, A.J. Williams picked up his production equipment back in 2016 and left his business partners to take a leap and launch his own studio.

That’s how Unorthodoxed Studios got its start.

“We did a lot of good work,” Williams said, referring to his former colleagues. “But my idea of the direction I wanted this studio to go was just totally different.” 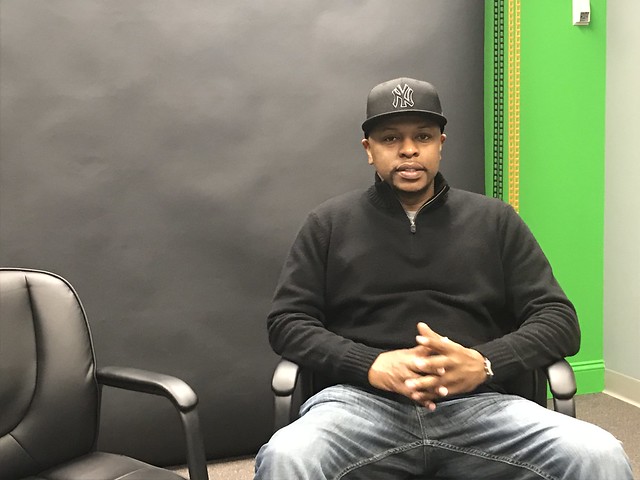 Williams moved his recording equipment to 404 Oak St. in Syracuse.

Now, almost nine months after it opened its doors, Unorthodoxed serves as a place for socially conscious and gospel rappers in the Syracuse area to let loose, be creative and lay down their tracks using state-of-the-art music production equipment. The studio is a room with a microphone and headphones separated by a glass wall from a computer screen and a production board. Rappers record songs with positive, uplifting messages — which, Williams says, isn’t always the type of rap on the radio.

Branden Lotts, a.k.a. B. Supreme, an up-and-coming rapper from Cortland, needed a facility where he could put a few songs down to get his name out there. He heard about Unorthodoxed and reached out to Williams, and the two started working about once a week in the studio.

“When I first got in there, I was a little shy,” Lotts said of his first session with Williams. “But now, I’m able to open up and just get to work. He just wants me to be comfortable.”

Figuring out how to breathe properly while rapping has been one of Lotts’ challenges, but Williams has been working with him. Although Williams no longer performs himself, he first fell in love with music as a teenage rapper growing up on the South Side of Syracuse.

It started when Williams was 13, on a day when his older sister challenged his musical talent by rapping the lyrics of a new song on the radio. Williams, not realizing that his sister had simply memorized the words to the radio song, rose to the occasion by grabbing a pen and paper and writing his own rap to get even with her.

“When I got it down on paper, I rehearsed it, got it down, and then went after my sister and just starting rapping,” Williams said. “She asked, ‘What song is that?’ And I was like, ‘What do you mean what song is that? That’s my song.’”

The next day, Williams’ sister ran and told all of her high school friends that her little brother could rap.

“So, then I just had this one rap, but I couldn’t just keep singing this one rap,” Williams said, laughing. “I started writing more, and I got known around here as a pretty decent rapper.” 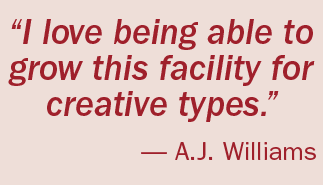 Now, other than the rare occurrences when he’ll grab the mic and prove to his clients that he can still rap, Williams stays behind the scenes, managing the studio and working with the artists.

“As much as I did love being an artist and performing, I think I like being more of a cornerstone to help build up and make things happen,” Williams said. “I love being able to grow this facility for creative types to come and create and do things.”

The musicians on the label aren’t the only ones who appear to benefit from Unorthodoxed. Rob Butler, who has always had a passion for music, called Williams in September and asked if he could come on and do production work with the artists. The two had worked on a few compilation albums in the past, and Butler was hoping Unorthodoxed could reunite the two.

“He’s been like a big brother to me. He’s given me a home to work out of,” Butler said of Williams. “He opens up his doors to those who have a hunger for it, and he’s created that lane. I thank him for it.”

Music production is the tip of the iceberg that is Unorthodoxed. Williams is a small businessman in his neighborhood. Adjacent to the recording studio, he has opened a full-fledged photography and videography studio equipped with a green screen. Not only does Williams do his own photoshoots there, he also rents the space out to photographers and videographers who don’t have a professional place to work.

Additionally, Williams takes his photography outside of the studio and makes himself available for hire to shoot fashion shows, weddings and other events.

Paul Crisafulli, a school teacher at Westside Academy at Blodgett at 312 Oswego St., tied the knot in late December and hired Williams to do the photography and videography for the wedding ceremony.

“The night before, A.J. actually came to the church to get an eye for it,” Crisafulli said. “He just went above and beyond. He had great ideas, great insight, and he just put in so many more hours than we even anticipated.”

The finishing touches are still being put on the final product, and Crisafulli and his bride are thrilled to see what Williams puts together.

There’s the label, which currently has three rappers who push a positive message and theme through their music. And there are the facilities, which include the recording studio and the photography/videography studio, which can be utilized with Williams’ oversight or fully rented out to experienced artists.

“What I’m doing now with the photography and video, that’s kind of my main grind,” Williams said. “I would do that even if the studio was closed.” But sometimes I get in this mood where I want to do some production, and that’s where Unorthodoxed as a label comes in.”

— Article and photos by Jack Henkels, The Stand reporter