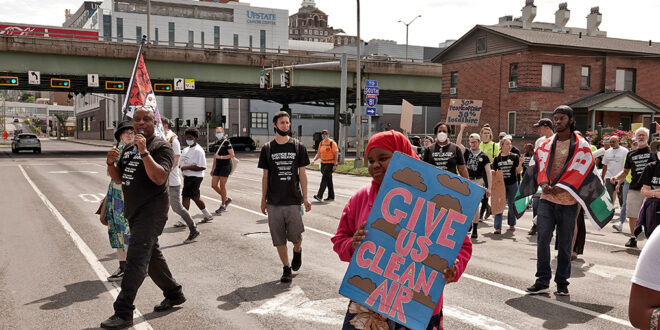 March for Justice for I-81 demonstrators walk across Adams Street towards downtown Aug. 14. | Mike Greenlar, The Stand

United Fight for I-81 Justice

More than 100 Syracuse residents stood across from The Oncenter — a week before the New York State Department of Transportation is scheduled to meet there to discuss the future of the I-81 viaduct project.

The protestors started their morning at 10 a.m., assembling at STEAM at Dr. King Elementary, and marched to the New York State Office building with cries for racial, economic and environmental justice. Deka Dancil, president of the Urban Jobs Task Force (UJTF), called the march a final push for the NYSDOT to meet community demands on the I-18 project: Equal opportunity for Black and brown communities in Syracuse.

“This is our last chance as a community to come out and make a public statement and share our demands with the NYSDOT,” Dancil said.

Protesters held up signs that read “Shine a Light on Those in the Shadows of I-81″ and “Justice for Syracuse City Children.” Individuals that the signs referred to were present and spoke about the effects I-81 had on their health. Rydell Davis, a South Side native, spoke about being one of the children at Dr. King Elementary who suffered with asthma due to the highway.

“As a child, I just thought asthma was something normal — going to the hospital probably three or four times a month was just something normal,” Davis said. “Realizing that those toxins that are coming from those cars being so close to that area, was messing all of us up.”

You don’t have to look very far to find the roaring highway from the elementary school. Davis said once he moved further away from I-81, his asthma began to clear. Now, the community is displeased with the idea of the DOT moving forward with a ramp entrance to the freeway by Dr. King School.

Environmental issues aren’t the only concern the community feels the viaduct’s removal impacts. The highway also sits where the historic 15th Ward sat, a predominantly Black and brown community.

Many of those that were alive during the ’50s saw what they called “military sized tanks” come into the neighborhood and bulldoze family members’ and friends’ homes and businesses. Some are afraid today, once the viaduct comes down, that the new 18 acres that would open up will go towards gentrification.

There has been talk by city officials that the I-81 viaduct project would bring “thousands” of jobs into the city, but Dancil fears that those jobs will not go to community members.

“I don’t know about you, but every time I ride by a construction site in the city, I don’t see anybody that looks like me,” Dancil said.

The UJTF accumulated more than 3,000 signatures asking for jobs and more than 4,000 comments have been submitted to the NYSDOT in response to the Draft Environmental Impact Statement. As soon as the march concluded downtown, community leaders called upon those present to submit even more comments and to show up for the NYDOT DEIS hearing set for Aug. 18.

“We don’t want to give them any excuse to be able to say we weren’t loud enough, or they didn’t hear us,” Dancil said. “We are here.”

The NYSDOT will have two virtual public hearings also on Aug. 17, followed by two in-person public hearings on Aug. 18. Community leaders have pushed for residents in the Syracuse area to leave a comment for the NYSDOT in regards to the DEIS. The last day to submit a comment is Sep. 14.