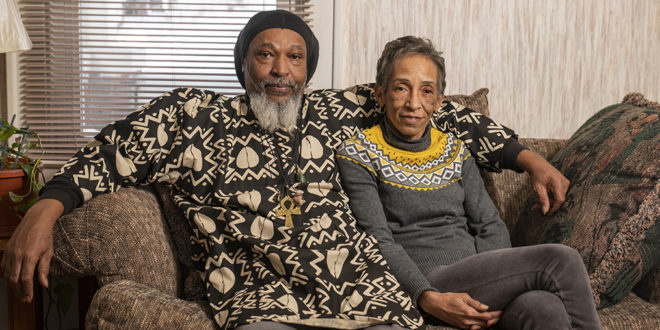 Aundra, 56, and Twiggy Billue, 54, have been married for 31 years. A longstanding tradition they share is to enjoy Ethiopian food each year on their anniversary, June 6. Twiggy works as the workforce development coordinator for Jubilee Homes of Syracuse Inc., and Aundra is retired. | Ben Cleeton, Staff Photographer

There has been limited research focused on African-American marriages.

What research has been done has generally found that, compared to other groups, blacks have among the lowest marriage rates. African-Americans tend to marry at a later age and spend less time married than whites, according to Patricia Dixon, author of “African American Relationships, Marriages, and Families.”

A recent study by the Family Process Institute looked at the strengths of 39 African-American couples. Vital to these couples’ success was their ability to practice open and honest communication, the ability to understand a marriage is made up of two individuals and a willingness to allow marital expectations to evolve.

Two South Side couples spoke with The Stand to share how they have kept their marriages going for decades.

Their relationship shattered all norms, says Aundra Billue, who tells his three children their mother saved his life.

After Memorial Day in 1987, he was on his way to his grandmother’s house when he heard someone call his name.

Twiggy, then Simmons, was with her friend at 118 Dablon Court in Pioneer Homes. Aundra caught her eye. Her friend already knew Aundra, so Twiggy clamored for an introduction.

For her it was love at first sight. For him, it was much more.

Aundra was living with his sister who was about to be evicted. He’d also recently learned the military would not accept him because he only had a GED. He was walking to his grandmother’s house that day to ask if he could crash there until he scraped together enough money for his own place. Consumed with uncertainty for his future, he wasn’t looking for a relationship.

Yet a few hours after meeting Twiggy, he no longer needed a place to stay because she invited him to move in with her.

“If I never met her,” Aundra said, “I don’t even know what I’d be doing.”
He saw her, and still sees her, as a person with a good heart, who is dedicated and genuine. He felt nothing but unconditional love from her.

“When you recognize those qualities, you have to take a chance,” he said. “How much longer should I have waited for her to try and prove something more than she showed me from day one?”

Since that first day, the pair has been inseparable. So their next leap may not come as such a surprise.

Eight days after meeting, they tied the knot.

“He dared me,” Twiggy said of his proposal.

She wanted to take him back to her home of D.C. to meet her mother and family. He wasn’t sure what they would think of him. She told him they liked anyone she likes … that he was her friend.

And with that, he said he wouldn’t go unless they were married.

“You barely know me,” she responded, stunned. But the shock soon wore off as she took him up on his dare, which he continued to push.

“The courthouse is right down the street,” he said. “We can go and complete all the paperwork.”

“Then let’s go,” she snapped back.

After filling out all the forms, they were told they had to wait 24 hours to be married. The state wants you to have that thinking period, Twiggy says, adding that night friends came to take Aundra out, to discourage him.

But the next morning, a Saturday, Aundra walked up the steps of the house of a reverend he knew since he was a boy and asked if he would marry them.

“The reverend’s wife pulled together a piano and flowers, and we had the ceremony right in their living room on the corner of Midland and Borden avenues,” Twiggy said.

“I’m in love with this man. I’ve been in love with him since the day I saw him,” she said. “I have friends who tell me they are jealous that I’m still in love. But today is no different than the day I met him, except I now have a home with him. And the love is probably 50 percent more.”

Syracuse Deputy Mayor Sharon Owens and her husband Shaun, a driver working the evening shift for UPS, have been married for 28 steady years.

The couple met through mutual friends and established a friendship of their own before marrying a year later.

Shaun believes he asked her out first, but both are a bit fuzzy on the details.

“You’re asking about a long time ago,” Sharon said with a laugh, adding that she can’t remember how he proposed. Looking to each other, they contemplate when they knew they were in love. Neither can pinpoint an exact time nor recall a “fireworks moment.”

“The thing about us, we never had one of those fiery relationships,” Sharon said. “I remember friends who had those. I don’t see any of them still together.”

Their relationship has been steadfast.

“It’s always been a steady as you go relationship,” Sharon said. “To say it like that sounds boring, but that’s what it is.”

Shaun agreed. “It grew from a friendship and we just clicked,” he said.

At their wedding, they danced to “Have You Ever Loved Somebody” by Freddie Jackson and honeymooned in the Poconos.

Their greatest challenge happened when their second child, Shaun’s namesake, was born prematurely and died a week later. With only a few years of marriage under their belt and toddler Simone, now 28, to care for at home, the death could have torn their marriage apart. Instead, Sharon says, it made them stronger as they both turned to God and each other to heal.

Then eight years later Isaac, now 19, was born with autism. Many people don’t understand the nuances of being a family with a child with special needs, Sharon believes. “That difference and who we are as a unit makes us a strong family,” she said.

Their partnership has been built from a solid foundation and grown stronger with each passing year.

When people ask Shaun how they’ve been together so long, he tells them marriage is the good life, explaining each provides the counter balance the other needs.

The couple formed a quick bond and have continued to grow together.

“For us it came together pretty quickly,” Sharon said. “But it took 27 years to get to where we are. Every day you learn something new.”