Chief of Police Frank Fowler arrived at City Hall Monday, Nov. 15, night armed with numbers, statistics, and the results of his own racial profiling study to construct a passionate defense of his police department from accusations of racial profiling.

Nearly 50 members from the community, Syracuse Police Department and the Syracuse Common Council gathered to hear researchers present their latest findings on racial profiling in the city of Syracuse.

Two economists, William C. Horrace of Syracuse University, and Shawn Rohlin, of the University of Akron, were commissioned by the Syracuse Common Council to perform a study titled the “City of Syracuse Police-Citizen Encounter Study,” which was released on the Syracuse Police Department website this morning. They found that blacks were stopped, frisked and arrested more than twice as often as whites. However, they cautioned that the numbers alone did not indicate racial profiling.

Horrace and Rohlin did a similar study in 2006, but only had one year of data to analyze. The 2010 study, presented Monday, uses data collected from 2006 to 2009. The two researchers analyzed data gathered from forms filled out by individual patrol officers after each citizen stop not resulting in an arrest. The forms enabled the researchers to determine the reason for a stop, whether they were searched or frisked, and the officer’s actions after stopping a citizen. They only used data from “discretionary stops,” or stops made by an officer using his own judgment and observations in deciding to stop an individual while on patrol.

Horrace and Rohlin said that their study conclusively showed a difference in police officer behavior according to race, but were hesitant to say that racial profiling was evident. For example, blacks were stopped and frisked without arrest 13.6 percent more than whites in the lowest crime areas of the city. However, Horrace said that proof of differential treatment does not necessarily equate to racial profiling. There are many factors left out of the study that could explain differential treatment.

“We have to combine 100,000 observations to make broad generalizations. The problem with analyzing behaviors is that it doesn’t get at specific behaviors and incidents … we don’t know if Officer X hates blacks. We will never know that unless we interview him and he confesses. As I said, identifying bias is a very difficult process,” Horrace said.

The results of a separate study, commissioned by Chief of Police Frank Fowler through the John F. Finn Institute for Public Safety, were presented after Horrace and Rohlin finished speaking to the Common Council.

The John F. Finn Institute for Public Safety is a non-profit research organization specializing in social research nationwide on public safety and security. The institute used the same data given to Horrace and Rohlin by the police department, but employed an approach they called the “Veil-of-Darkness” method, a method also applied in researching racial profiling in Cincinnati, OH and Oakland, CA.

“If there were instances of racial profiling, we would be seeing may more African-Americans stopped during the day,” he said.

The data presented by the Institute showed no appreciable difference between the numbers of stops made during the day and after dark. However, Worden did qualify his results saying that any analysis would not “be definitive or conclusive.”

“I can’t tell you whether there is racial profiling or there isn’t,” Worden said.

Then, it was Fowler’s turn.

Standing up, Fowler turned to address the audience in the chamber. In a loud and decisive voice, he defended the actions of his police officers saying that he sends officers to the areas showing the highest crime rates. 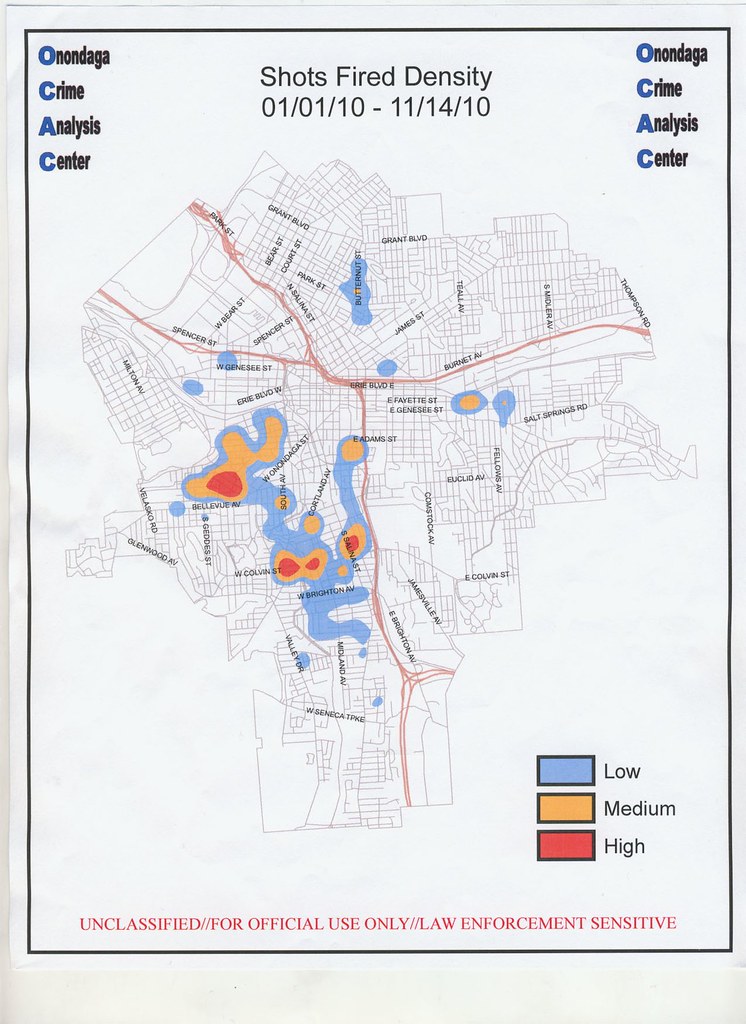 Chief Frank Fowler used the shots fired density map to show those attending Monday’s meeting how he determines where to send more police officers. He noted that the highest density of shootings occurred in Pioneer Homes ... where, he also said, the highest percentage of blacks and Hispanics live. -- Provided by the Onondaga Crime Analysis Center and unclassified for official use only.

“You know the issues with the shootings over the past couple weeks,” he continued, holding up a declassified map showing the areas of the city with the highest numbers of shootings since January 2010.

“To date, the Syracuse Police Department has responded to 296 calls for shots fired in the city of Syracuse,” he said. “We’ve recovered 277 weapons from our city, we have made 204 arrests for gun possession.”

“I told you before, I’ll say it again and again, as long I’m Chief of Police, I will dispatch my officers where the problems are … we’re dealing with people in our city that are firing off guns in highly populated areas and it’s only a matter time before one of those stray bullets goes flying through a windows and hits some child or elderly person minding their own business. And I am charged with the awesome task of keeping everybody in these communities safe,” he said.

Subjected to both criticism and support from community members present at the meeting, several expressed approval for the measures Fowler has been taking to address crime in their neighborhoods.

“We do have to start paying attention,” said Helen Hudson, the director of Mothers Against Gun Violence. “My civil liberties are being violated every day, when I have to worry about driving down the street and shots being fired.”

Syracuse Common Councilor and Public Safety Committee Chair Bill Ryan said he felt the meeting had “turned out to be less contentious” then he originally thought. “I’m pleased that we, as a community, are willing to look at this issue. We have both studies, and I don’t think they are necessarily competing. I was pleased with the way the whole meeting went and that people are concerned about it,” Ryan said.

He also said that as public safety chair, he tends to receive more complaints about police demeanor, a police officer being disrespectful or rude, rather than actual complaints of racial profiling. In light of the recent violent crime, he said, racial profiling issues become secondary in the eyes of many people.

“We’re all concerned about the same issues. We’re concerned about our children’s safety and our own safety here in the city of Syracuse, and certainly that is on everybody’s mind right now,” he said.

To view both studies, click the links above or visit the Syracuse Police Department’s site where both studies are shared here
Frank Fowler Racial Profiling 2010-11-16
admin
Share !