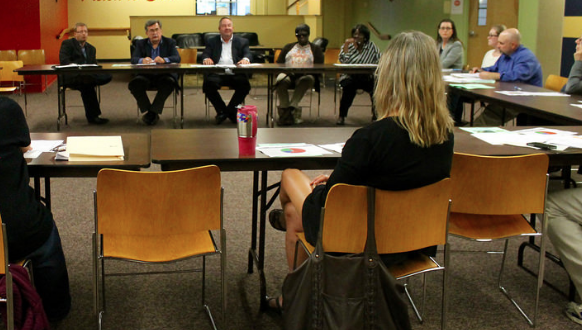 Residents attend a TNT meeting held last year with a guest from CENTRO at the South Side Innovation Center. | File Photo

The 2016 State of the City Address given by Mayor Stephanie Miner highlighted “the racial and ethnic lines upon which the scourge of poverty is felt,” citing that 65 percent of African-Americans in Syracuse “live in areas of extreme poverty” such as its South Side. She added, “On the far end of the poverty scale are those without the stability that comes from employment and social connection.”

In order to alleviate poverty on the South Side, a neighborhood captain of the Southwest section of the South Side, where Miner gave her speech back in January, suggested assisting neighborhood youth in getting work apprenticeships. The captain, Mary Margaret O’Hara, also said that a retired firefighter had offered to donate his time to teach local youngsters how to do engine repair service.

O’Hara made her suggestion acting as rapporteur for the Southwest group breakaway discussion on the vision, goals and objectives for the South Side’s future, which took place on June 27 at the South Side Innovation Center under the auspices of the Tomorrow’s Neighborhoods Today (TNT) Area 3. Her report was part of the sophomore workshop aimed at hammering out a five-year plan for this community.

In attendance were 37 individuals, who were divided into discussion groups based on the four specific sections comprising the area: Brighton, Southwest, Elmwood and Strathmore. Sixteen participants allocated themselves to the Brighton caucus, 12 to the Southwest’s, five to Elmwood’s and four to Strathmore’s.

Neighborhood leader Sam Roberts II presented the report for Brighton. “Our goal is to be an enjoyable and involved community where people stop to sit down and break bread together at events such as block parties.” When questioned how this objective would be achieved, he replied, “There are enough organizations in Brighton to put these activities together.”

Elmwood members shared sentiments with their Brighton brethren. Elmwood spokeswoman Jessi Lyons said, “We need to create a neighborhood where one can stop, visit, shop and experience diversity.”

Not to be outdone, O’Hara, speaking for the Southwest, added, “We envision integrating the neighborhood by having block parties, festivals, entertainment, Wi-Fi cafes, a tidiest block contest and celebrations after outdoor cleanups.”

Rounding out Area 3 neighborhoods was Strathmore, whose rapporteur said, “Refurbishing buildings and establishing an independent movie house similar to Manlius Art House are in our statement of purpose.”

Prior to the group breakaway discussions, Camille Coakley, the workshops facilitator, rattled off the results of a survey conducted among Area 3 residents. Among the findings quoted was that 65.6 percent of its community members said that they were happy and wouldn’t move out of their neighborhoods in the next five years. The outcomes were not broken down by each of the four sections.

A look at the data from the census tracts reveals that Area 3 is a heterogeneous and diverse district, having tracts with the highest concentration of poverty in the nation (Brighton and the Southwest) and others more affluent (Strathmore and Elmwood).

In an interview at another occasion, Bob Dougherty, former Syracuse Common Councilor for the 3rd District, said, “TNT Area 3 was created lumping together very different neighborhoods in terms of socioeconomic statuses and racial makeup.”

To help spark ideas among the participants in the four brainstorming sessions, Coakley invited two representatives from Hawley-Green Historic District, Peter Gembler and Frank Schiraldi. The couple, who said they were married to each other, proceeded to describe its transition from a place “absolutely infested with drugs and prostitution” to a revitalized and vibrant community.

“When I moved to the district in 1999, I often saw women exposing their breasts at nights on the corner of Catherine Street, Hawley Avenue and Green Street,” Gembler said. “We organized a Neighborhood Watch to get the bad elements out. Twenty-four people in pairs started walking through designated routes to report problem properties, code concerns and criminal activities.”

Schiraldi added, “We followed the rule, ‘three strikes and you are out,’ to achieve the abatement of drug houses, slumlord-owned properties and other nuisance.”

Another of their steps was “to get the good elements in.” To this effect, they picked a niche in the housing market for Hawley-Green, developing a campaign to brand it as gay- and lesbian-friendly neighborhood. The campaign was supported by prominent lesbian community leaders who had ended up living in the area, such as Nancy Keefe Rhodes, former columnist for the now-defunct weekly newspaper Syracuse City Eagle; and married couples Laura Serway and Cindy Seymour, co-owners of Laci’s Tapas Bar, and; the late Leslie Feinberg and Minnie Bruce Pratt, pioneers for transgender rights and members of the Workers World Party.

Coakley seemed to agree with the two guest speakers. “The central idea is to market our neighborhood with our own niche,” she said. “We need to solve the current perception of the South Side.”

O’Hara liked the idea of having Neighborhood Watch groups on the South Side “to serve as the eyes and ears for the community.”

Aggie Lane, a Southwest neighbor, was more cautious. “There’s ambivalence about Neighborhood Watch,” she said. “Some see it as being police-driven. We need to build the relationships first.”

Geneva Hayden, who lives six blocks down the street from Lane, concluded: “The South Side has the pieces to be a loving and caring community.”

The date of the next Area 3 workshop is July 25 at 6 p.m. at the South Side Innovation Center.