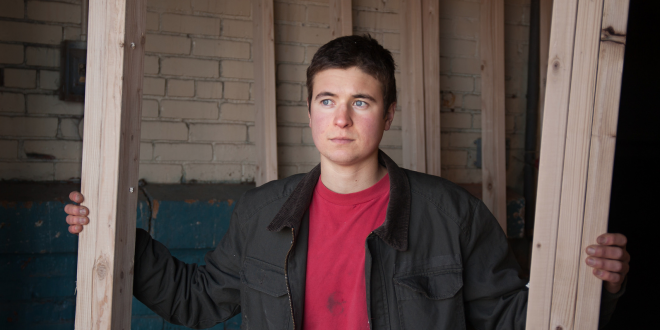 It’s been a long road for Andrew Lunetta, executive director of A Tiny Home for Good as he has tried to secure land and build tiny homes for the homeless.

The road has been wrought with lengthy application processes, zoning issues, criticisms, meetings and a roller coaster of promising lots.

After a year of negotiations with city officials and stacks of paperwork to file, Lunetta said he hopes by November to begin building the “tiny homes” for people who lack any permanent home. Lunetta said he envisions having once-homeless tenants begin moving into the 250-foot, small-scale houses in December. 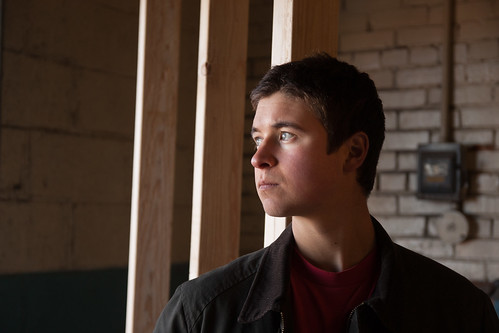 Andrew Lunetta, founder of A Tiny Home for Good, stands in a warehouse on Erie Blvd. where the walls of the tiny homes have been constructed. The framed walls sit and wait to be moved to a site to build the group’s first set of tiny homes. Thus far, all city-owned lots that have been considered have been met with resistance by residents, and a private lot has been delayed until the deed can be handed over. | Photo by Bob Schultz

Even if his organization meets that general date, Lunetta said he will not easily forget the unexpected delays he encountered along the way.

“I think I’d be lying if I were to say that I’m comfortable with where we’re at in the process and how long it’s taken,” Lunetta said.

If the homes are built by November, it would be a little over a year since A Tiny Home for Good acquired its nonprofit status and began looking for property, originally from the Greater Syracuse Land Bank. The land bank holds vacant properties that have been abandoned and are tax-delinquent and sells them at a low price to people who will turn them into something productive for the community.

Lunetta’s nonprofit originally targeted a property on Marcellus Street as its “perfect location” to break ground, but it ran into stiff opposition.

To Lunetta’s surprise, there was a lot of negative feedback. At the meeting where the land bank board was to vote on whether to sell the property to A Tiny Home for Good, about 15 West Side neighbors showed up to voice concern.

Some of those concerns involved fears about who would be moving into the homes and whether the look of the small homes would devalue the community.

The board decided to table the proposal because it felt there needed to be more community outreach.

Lunetta began looking elsewhere for land where he could get the homes built so that the community could see what they looked like. If there were a positive feeling about the homes, he could go back to the land bank for properties for future projects.

At the end of the summer, the group held meetings in the South Side to attempt to build on West Kennedy Street. Residents voiced concerned that the homes would look severely out of place and would hinder the effort of rebuilding the South Side.

At that point, A Tiny Home for Good was still unsure of who would build the homes for the project, but the money was in place. The group is now working with Operation Northern Comfort to construct the homes.

Operation Northern Comfort, based in Central New York, is a nonprofit volunteer organization that supplies labor and resources for construction in order to improve the living conditions of areas in need.

Common Councilor Bob Dougherty, who is a board member for A Tiny Home for Good, thinks the answer is simple — get the houses up.

“Once it is up, it will allay a lot of people’s fears,” Dougherty said.

This could happen in the near future on the property on South Salina Street and Glen Avenue, as Lunetta said he was told A Tiny Home for Good could have the deed soon. But he has been told two dates — Sept. 1 and Oct. 1 — and both dates have passed without a deed.

Lunetta said the group is at a standstill right now, which is frustrating because he hates to see his friends on the streets and in shelters.

Bethany Stewart, Veteran Affairs official who specializes in the homeless, said that the department defines homeless people as people who are either living on the streets or bouncing between shelters. If a person lives on a friend’s couch or rug, that person is not considered “homeless” by state standards.

In an effort to reduce the large number of homeless, Cindy Seymour, a Syracuse restaurant owner, has partnered with the Rescue Mission to build three tiny homes for female homeless veterans on Rescue Mission property on the South Side. Once built, the homes will be donated to the Rescue Mission, which will monitor and maintain the properties and help the residents, Seymour said.

Dougherty said that more tiny homes and the prospect of tiny homes being built will help, especially to show they won’t look out of place or look shabby.

“It won’t be new, people will get used to them, it won’t be exotic or strange,” Dougherty said.