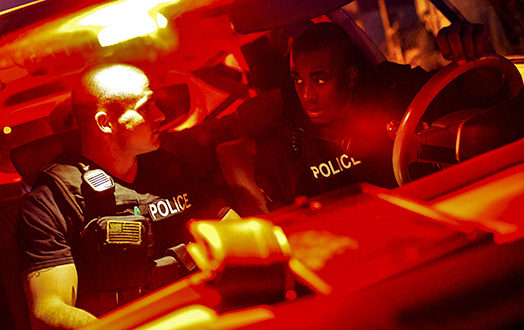 Officers Ahmad Mims, right, and William Lashomb, members of Syracuse Police Department Crime Reduction Team, talk over the next steps after processing contraband found during a traffic stop. The Crime Reduction The They Wear Blue series takes viewers inside the lives of local officers, showing that the force is truly a collection of individuals. | Michael Santiago, They Wear Blue Photographer

More about this series  ::

Many people think of the police force as one unit, like a tribe with a single identity. But beyond the blue of the uniform, each police officer is unique. This project takes you inside the lives of the chief and several officers in Syracuse, showing that the force is truly a collection of individuals.

Given the country’s major news events involving the police over the past few years, and because this is a city where the minority population has very nearly become the majority, we pay special attention to minority officers in this project. They account for just one in every 10 officers, though Syracuse is 45 percent minority. Our project is not intended to be either “positive” or “negative,” but rather an honest and powerful look at this complex issue — all with the hope that it improves police and community relations.

Yet while race matters, it is not everything. As the new chief in Ferguson, Missouri, told a reporter on our team, when citizens see police, they don’t see individuals or race, “They see you as blue.”