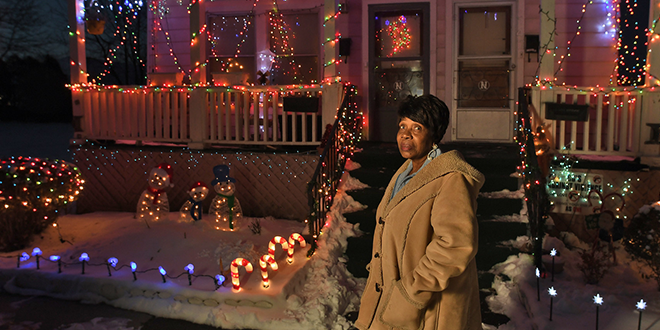 This image of Christine Barner-Hall in front of her Rose Avenue home, took second place in the Syracuse Press Club portrait category. | Mike Greenlar, The Stand

This week, the Syracuse Press Club held its 43rd annual Professional Recognition Awards ceremony to honor local journalists across media platforms. The planned event was moved to a virtual ceremony, live-streamed over three nights. Due to the rising Delta variant cases in Onondaga County, the press club chose to present awards virtually for a second year out of an abundance of caution.

Special contributors to The Stand were awarded four honors for work published throughout 2020.

Columnists Jeff Kramer took first place for “Census Concerns,” a piece explaining how data from the 2020 Census is used to inform how local funding is allotted. Judges wrote “Graceful writing and an artfully chiseled message that hit home. An elegant ode to boring government functions that should never be taken for granted.”

Kramer also took third place in the online breaking news category for “LiteracyCNY Set to Close this Week,” a piece announcing how this 62-year-old organization had to suspend operations due to lack of government funding.

Greenlar took second place for his portrait of Christine Barner-Hall, who was nominated by her niece for a spotlight article for 15 years of putting up holiday lights on her Rose Avenue home, a spectacular display that can even be seen by passing drivers on I-81.

Greenlar and Card both received third place in the photo essay category for “CNY Bicycle Giveaway,” which provided a look at the 24th year Jan Maloff and volunteers have distributed free bicycles to the community. More than 3,000 bikes were up for grabs.