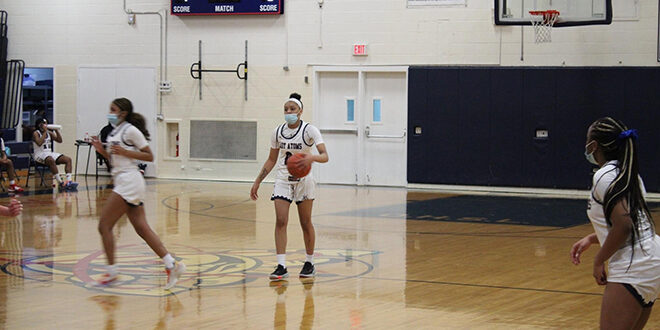 Lady Atoms talk impact and aftermath of a pandemic season

Over a decade ago, The Syracuse Academy of Science Girls Varsity Basketball Team was an infant athletic program searching for its identity. Their inaugural victory didn’t arrive until their second year as a team while under the regime of first-year Head Coach Reginald Pickard. He, along with Assistant Head Coach Donniesha Terry, rebuilt the program from annual ineptitude to perennial Class C powers in a span of five years.

Their historic rise consisted of consecutive Class C Sectional title berths during 2016 and 2017. In 2018, the Lady Atoms won the Class C Sectionals and made it all the way to the Class C State Title game before losing to Millbrook High. They finished that season 20-5 and possessed a No. 2 ranking in Class C play.

SAS has played Class B basketball since their final year of Class C play in 2018-2019. The program’s growth and development overtime finally allowed them to out-pace the Class C competition that once neutralized them. Their foes now were within the tough Onondaga High School League Central Division. During the 2020 season, they went 5-1 against its divisional competition. This stretch, coupled with a 5-2 record against non-divisional teams in the OHSL, led the program back to familiar title contention. In the end, the team’s 2020 roster fell short of a title berth as they lost to Marcellus High in the Class B quarterfinal.

That was the last sense of basketball normalcy to date that the Lady Atoms saw during their crumbling postseason defeat. SAS would return a team mostly of juniors and sophomores in 2021 after five seniors from last season’s postseason run graduated. Yet, the expectation was to build the program back to championship contention once again with a collection of young, hungry and dedicated teenage athletes. In Pickard’s eyes, hope was on the horizon.

“Even though we had five seniors on that team, we knew we still were going to have an excellent chance to get back and maybe even farther than we were,” Pickard said.

That reality ceased to exist for the Lady Atoms when the pandemic wrecked the New York area. When the Onondaga High School League eventually returned for competitive play in February, the girls didn’t have a chance to compete in the postseason due to COVID-19 regulations. Prior to the league’s season ruling, Pickard harped that his team of local talent didn’t have the resources in the city to adequately prepare for an OHSL resurrection.

“We didn’t have a place to really work because of the pandemic,” Pickard said. “I couldn’t let them in the gym, because it was a school, and it could affect the kids if someone came in positive or if someone was infected. So during the summertime, it was hard for the girls to work out in the city, because there weren’t rims in the city.”

It was a disadvantage that Pickard acknowledged wasn’t a dilemma for the competition outside their jurisdiction.

“Outside the city, there were rims,” Pickard said. “So already, they were at an advantage over us not having access to the same workouts, training … you know, the things going on outside the city.”

The limitations to practicing locally due to COVID-19 regulations forced the program to have to make their own individual practice reps at home. The Lady Atmos’s annual off-season boxing workouts, open gym runs, and what Pickard deemed as their “Hell Week” weren’t allowed because of pandemic restrictions. With the reality of basketball practice becoming a light dribbling workout in the player’s own backyards and with some working jobs on top of that, Pickard felt that his girls became complacent around the world of restrictions.

The players as a collective didn’t have a positive outlook on a season happening during their time away from each other and the hardwood. Junior First Team All-OHSL Forward Alexius Pierce spoke on the state of mind she had before and when the program resumed team activities.

“I thought we would have no season,” Pierce said. “I didn’t believe it was going to happen. So, I wasn’t really focused on basketball, and then it surprised me when it came up. So, I’m out of shape because I haven’t focused on this for so long. It hit me harder than I expected.”

“I wasn’t expecting a season at all either,” Powell said. “It’s just that we got the call that day saying we were going to have a season. It was unexpected.”

Once SAS stepped on the floor, the program faced the daunting reality of a hastened and regulated in-season schedule. The team finished with a 4-5 record playing only OHSL competition and completed their season in a month’s time. Their 2021 campaign featured once a week practices, gameplay conducted with masks worn over the player’s mouths, and the weekly wonder of would a game be played every Tuesday and Thursday. Pickard felt anxiety over all the unknowns.

“I always thought that it could be over at any time,” he said. “The numbers were steadily going up; then they were steadily going down. We were fortunate enough not to have any of our student athletes on the basketball team — boys or girls — that came positive off our testing.”

The Lady Atoms COVID-19 testing was a once a week endeavor that Pickard recalled as a rough ordeal to see throughout the season.

“It was hard watching everyone come in and get tested,” Coach Pickard said. “Running in from work or home making sure that they got tested to play a basketball game. It was hard to see that every single week.”

Pierce recalled the challenges she faced adjusting to abnormalities within the game that were once regular mainstays during last season pre-pandemic.

“It wasn’t really playing the game, because we all know how to play basketball,” Pierce began. “It’s adjusting to being with people. It’s adjusting to people you haven’t played with for so long. The crowd never really affects you, but it becomes different after you play with a crowd for so long. You’re so used to hearing noise and hearing everything going on around you, and now you hear nothing but your teammates, a whistle, and your coach yelling? It just threw the game off sometimes.”

The season’s unique conclusion does present a ray of hope for the SAS program’s immediate future. This current season’s team will all return next year for a chance to compete for a state title in much better circumstances. Their nine-game campaign also shed a unique light on the importance of cherishing the game  they love.

“This pandemic allowed the kids to see what it’s really like to miss playing a sport due to something that was out of their hands,” Terry said.

The players themselves have a hunger to showcase their abilities as teammates to rectify this season’s shortcomings. Junior Point Guard Aneesha Millhouse, a Corcoran High School transfer, relishes the opportunity to be a part of the team for the sake of on-court chemistry.

“My motivation for next season is to develop a better bond with my teammates and get to know them better being that I just came from a different school,” Millhouse said. “I didn’t really get to learn them as well, and I feel like that affects us playing together. Being the point guard, I feel like that’s important for me to do so we can be better as a team.”

Junior Guard Kaydee Quinones desires to showcase her true ability under the fuel of being the team’s underrated player next season.

“I’ve always been the underdog,” Quinones said. “When you think of SAS, I’m not one of the first names that pop up, so that’s always been motivating for me.”

In a season where the grind of Lady Atoms basketball was diluted due to a global pandemic, it’s the effort and passion on the floor that Pickard will cherish the most out of his players next season in order to appease their fanbase.