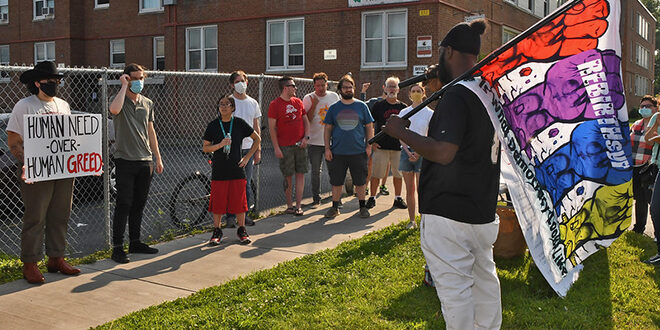 Members of the Syracuse Tenants Organizing for Power (STOP!) Coalition, Rebirth SYR and several tenants of Ballantyne Apartments stage a protest outside the complex Wednesday afternoon. | Mike Greenlar, The Stand

Dozens of eviction defense activists gathered Wednesday outside Ballantyne Garden Apartments to rally its tenants to protest the grim living conditions in some of the buildings.

The protest, organized by the Syracuse Tenants Organizing for Power (STOP!) Coalition and Rebirth SYR, followed a scathing report published on Syracuse.com that detailed the unsanitary state of some of the apartment buildings — decaying infrastructure, vermin infestations and accounts of deadbeat management unwilling to make changes. The apartment complex, which houses approximately 140 units, is located near the intersection of South Salina Street and Ballantyne Road on the city’s South Side.

A letter issued to tenants by building manager Jackie Kowaleski in December 2020, stated “If you owe rent, I suggest you start moving, courts open Dec. 31. Paperwork is already done, filing on 45 tenants.”

It is unclear if in her letter Kowaleski is threatening to evict tenants with backlogged rent payments, as the eviction moratorium imposed by the state is active until Aug. 31, and the federal eviction moratorium recommended by the Centers for Disease Control and Prevention (CDC) was recently extended by 60 days in a large portion of localities across the United States — including Onondaga County.

“The landlords, along with the property manager, at Ballantyne freely entered into their occupations and committed to providing their tenants with a safe, clean place to live,” said Stephanie Kenific, an organizer with STOP! and a member of the Syracuse Party for Socialism and Liberation (PSL).

Kenific — who along with members of the Syracuse Tenants Union, PSL and Syracuse Democratic Socialists of America (DSA) — has canvassed the North and South sides of the city for close to six months, seeking to collectivize tenant power. In an interview earlier this week, Kenific said management has not been keeping up with that commitment, and it is unclear if they ever have.

“Tenants have told us and shown evidence of insect and rodent infestations, crumbling walls, deteriorating staircases and other conditions which make the apartments uninhabitable,” she continued.

In the letter, Kowaleski made accusations suggesting some of the daunting living conditions fell on the tenants, adding “most of you don’t work and live like pigs,” in reference to bug infestations within the buildings.

“These horrific conditions existed well before the pandemic, and the property manager herself informed tenants in (the) letter that she would not ask maintenance to respond to tenant problems or to clean the buildings,” said Kenific in response to comments from management alleging the pandemic has made it more difficult to work on building improvements.

Kayla Johnson, an activist and former candidate for an at-large seat on the Syracuse Common Council, has visited one of the apartment buildings several times since July. She’s spoken with at least 12 tenants since, asking about living conditions and management.

“I just couldn’t believe it,” she said. “A tenant was telling me black water is coming out of the showers and how they can’t take showers for several days. Other tenants were telling me that, when they started falling behind on bills because they lost their job due to the pandemic, maintenance just stopped caring.”

Reading Syracuse.com’s recent article was eye opening for Johnson. She said she couldn’t believe the property managers were shifting the blame to tenants, adding that, although not every building seems in complete disrepair, some have hallways that “look like they have not been swept in years.”

In the December letter issued to tenants, Kowaleski noted maintenance workers were instructed to block the phone numbers of residents of the complex, requesting instead that work orders be directed to her office.

“As soon as you immediately walk into the hallway, it is a place that makes you think ‘do you even want to go into the apartment?,’” Johnson said. “A lot of people told me the maintenance men don’t show up when they call. Tenants have to go to (Kowaleski’s office), and it turns into a bad confrontation. There is a lot of fear (Kowaleski) put in these tenants.”

Part of that fear, Johnson said, also comes from Kowaleski saying in the letter she will notify social service agencies if there are people living in the buildings who are not “approved by her office.” Presumably, this could result in a loss of public benefits for residents.

“Unfortunately, if you have people living in your apartment not approved by the (building’s office), food stamps, public assistance and Section 8 will be notified this week,” according to the letter.

On her personal Facebook profile, Johnson chronicled most of the documents passed to her by tenants, including posting a photo of a list compiled by management and ownership of tenants who owed rent payments. In a Syracuse.com report, management noted they did not divulge that list online and used it as a last-ditch-effort to get people to pay or request rental assistance.

“The situation is a daunting one,” Kenific said. “Tenants have been abused, threatened and treated as inferior by the property manager and are consequently fearful of retaliation if they speak out. Landlords often like to suggest that tenants are the ones with all the power, but the fact that Kowaleski posted debts owed by tenants and the fact that she has the ability to refuse needed repairs for apartments shows us that the landlords are the ones who have the legal power to make tenants’ lives miserable.”

Lee Hodgson, a landlord who oversees 50 student housing units in Morrisville, attended Wednesday’s protest after noticing some of the foot traffic flocking toward the apartment complex. Ballantyne Apartments, Hodgson said, have been “a slum” for years.

“All of this mismanagement makes other smaller landlords look bad,” said Hodgson, who is seeking to buy and remodel properties in the city through the Greater Syracuse Land Bank. “I break my back to keep my properties in check. (Ballentine residents) take care of their properties and these landlords are not doing anything for them. It’s horrible.”