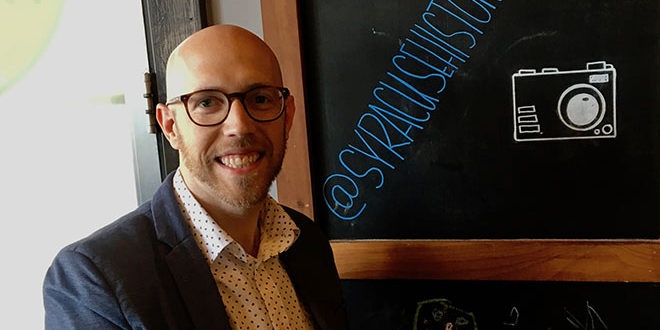 The man behind @SyracuseHistory recently awarded for preservation efforts

Haas could be addressing a crowd, talking over coffee or delving into local history. Whatever form it takes, he finds a captive audience, something Haas never thought possible in his youth.

Haas stutters. He has struggled with it since his youth, attending speech therapy from the age of 4 until after graduate school.

One percent of the population stutters, according to the National Stuttering Association (NSA). But not until grad school did Haas finally meet with other stutterers or tell anyone outside his family he was in speech therapy.

Tom Scharstein, adult programs chair of the NSA, first heard of Haas through his talk at the TEDx Syracuse University conference.

“(I) knew right away this was a standout person,” Scharstein said. “His energy and enthusiasm are contagious, inspiring multitudes within our organization. David is a leader. People listen to him and follow his example.”

Now the Syracuse chapter leader for the NSA, Haas organizes and leads monthly meetings supporting others struggling with stuttering. He gives the yearly address to incoming master’s students in speech pathology at Syracuse University.

“They have me come up and speak for about an hour and a half presentation,” Haas said. “I get to go through my circle of life … I call it my stuttering journey. It’s awesome. I actually contact them now ahead of time just to ask: ‘When am I coming? What’s the date this year?’”

A Syracuse native, Haas doesn’t just share his personal story. He tells stories of his city and the places here that matter to him.

On a recent visit to the Palace Commons Cafe in the Eastwood neighborhood, he was greeted by a chorus of “Hi, David,” from everyone inside. People in Syracuse know Haas, and Haas knows Syracuse.

Haas serves as the executive director of Sarah’s Guest House, a facility located in the South Side providing lodging and other amenities to patients and families receiving medical treatment at Syracuse hospitals.

Haas brings his own experience to this role. At 19, his mother passed away from a long battle with cancer, and the perspective of dealing with this loss helped shape his focus for Sarah’s Guest House.

On his Instagram, @SyracuseHistory, he shares local history and stories through the homes and buildings of Syracuse.

Haas started the account in 2012 and, with close to 20,000 followers, his stories have found an audience. Some posts focus on people who once lived in these homes. Others focus on distinct architectural details. Each post tells a story and highlights why these places matter.

There is 406 Danforth St., once owned by a former New York senator and by one of the wealthiest women in Syracuse. The stunning Victorian at 523 W. Onondaga St. was built for Carroll Earl Smith, whose father established the “Syracuse Daily Journal.”

One post focused on the doors from the former Yates Castle, now in storage at Syracuse University, which are all that remain from this building by famed architect James Renwick Jr.

“Sometimes you could envision how a story about a house or building goes along … because these are places that can’t speak for themselves, either,” Haas said. “So I’m giving a voice to the voiceless, in different ways.”

One post, highlighted in a Sean Kirst article for Syracuse.com, focused on 175 Parkside Ave., near the South Side. Haas had found that Helen Durney, the artist for the children’s book “Dumbo,” had lived and worked in the home.

Grant Johnson, president of the Preservation Association of Central New York (PACNY) spoke about Haas and his work in bringing these stories to light.

“David has a way of honing in on what makes a place significant beyond just its architecture or the things that are obvious to someone that might self-identify as a historic preservationist,” Johnson said.

PACNY honored Haas with its 2019 Preservation Merit Award, which is given in recognition of exceptional achievement in historic preservation. Haas won this award for his work with The Stand newspaper in organizing a special historic route for the 2019 South Side Photo Walk.

Haas was born, raised and is now a homeowner himself in the Eastwood neighborhood. He knows the history of his home, which was only owned once before him.

He purchased it from the children of the original builder. One of the grandchildren stopped by recently to pick hydrangeas from the yard for their wedding centerpieces. They even follow his Instagram account.

While he sees many leave the city they grew up in to pursue their passions elsewhere, Haas has no intention of leaving the area.

“Syracuse is so unique because one person can truly make a difference … You can start a program in this city, see tangible changes,” he said. “It could be an art project, it could be a business, it can be a volunteer initiative, anything. You can actually see things change.”