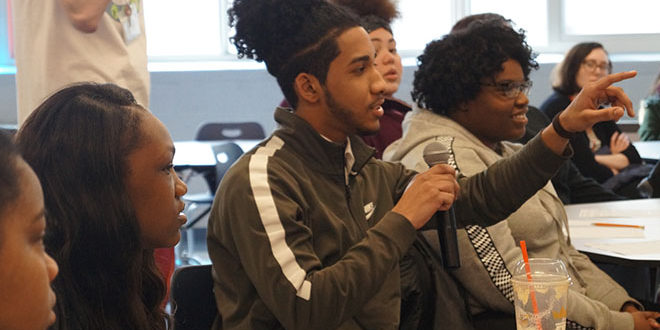 In a series of what was in momentum from Trevor Noah’s visit to Syracuse for the celebration of Martin Luther King Jr. Day earlier this year, the Institute of Technology at Syracuse Central hosted an interactive panel March 1 to induce conversations about racism in America and post-apartheid life in South Africa.

Along with notable Syracuse journalists and activists, the panel also consisted of journalists from South Africa who shared their work and art during “No Innocence This Side of The Womb” discussion hosted by Syracuse University’s Newhouse Center for Global Engagement. Zuko Gqadavama from Inkululeko, a non-profit serving students in Makhanda, South Africa; photo journalist Paul Botes from Mail & Guardian and reporter Niren Tolsi from The Con were among the visiting panelists.

The discussion began in the school cafeteria after lunch with an agenda of having a conversation with aspiring media students without any boundaries. Botes shared his experience of coming across “angry black men” in most of South Africa’s media. He said every time there was a police raid, a bunch of “predominantly white guys” like himself would crowd the scene that’s filled with vulnerable people.

“It’s important we change the conversation and start changing the way we do things,” Botes said. While sharing an image Botes shot during one of his projects on migrant labor, he spoke about his findings – unpaid labor, harsh living conditions and long working hours. The silence in the room resonated with all the stories that Botes laid in front of the students.

Tolsi continued and added to Botes’ experience by sharing his anecdotes of the 2012 Marikana massacre. “It was quite a disturbing moment for us,” he said. “Our part in this essentially is to try and understand through this really dramatic, brutal moment in our post-apartheid trajectory — where South Africa is right now.”

When Gqadavama took over the discussion, the students instantly connected with him, owing to his past relationship with the school as a mediator. Originally from Makhanda, South Africa, he works as a resource development coordinator at Inkululeko to help educate students in South Africa. “Because before there were different systems of education, white people had better chances and better education,” Gqadavama said. “After the end of apartheid, black communities – their system of education – are still disadvantaged.”

“Is there war still going on in South Africa?” asked one student. To which Tolsi replied, “There’s no obvious war. But there is a war between the people and the state, yes.”

The conversation gradually transitioned into the issues prevalent in Syracuse. The students immediately raised their hands to question Lanessa Chaplin, project counsel for the Central New York Chapter of the New York Civil Liberties Union about I-81 in Syracuse. Many were curious to know whether it would benefit the residents or make commutes harder. Aggie Lane, vice president of Urban Jobs Task Force, spoke about the scarcity of jobs and her petition to the New York State transportation department to not give project labor agreement to the unions unless they open positions for city residents and minorities. She educated the students about using publicly available data to understand the demographics of an area for the cause that she is currently supporting.

Jennifer Sanders, from NewsChannel 9; Ken Jackson, reporter and publisher of Urban CNY; Patrick Lohmann, reporter with the Syracuse Media Group, and Ashley Kang, director of The Stand, also spoke to students on the historic nature of the I-81 options, racism in local media and the why the role of journalists is important.

Lohmann told students his job is to share his opinion about what should be done with I-81, but to talk to all involved in the process and share current data and relevant information so readers can make their own determination.

The enthusiasm and curiosity in the room increased as the discussion proceeded. Gqadavama concluded the discussion by commenting one of the student’s suggestion about using social media as a tool to expand the Syracuse youth’s knowledge about various things happening around their town. “Social media can be used as a tool to mobilize not necessarily to deal with social issues, but to mobilize everyone to join the conversation,” Gqadavama said. “Let’s say, if someone has 10 followers is saying something that speaks directly to social issues. No likes, no comments, no sharing, no nothing. So, it becomes irrelevant in dealing hereon with issues that are facing the communities.h

He concluded by reading a quote by Kwame Nkrumah, a Ghanaian politician and revolutionary. 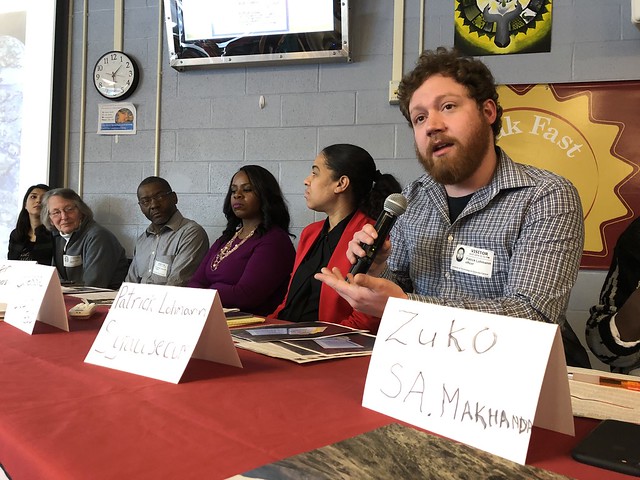