While violence is an often-discussed problem for Syracuse and the South Side, the city and this neighborhood is a sometimes-unrecognized refuge from it, too.

Many newcomers to America find a center on Burt Street to be a new start, and a peaceful alternative.

“The mission here is to help new refugees and all refugees in the United States to get adjusted and also prepare them to get self-sufficient,” said Haji Adan, executive director of the Somali Bantu Community Organization of Syracuse. 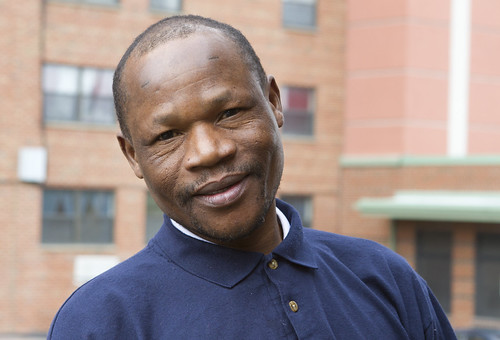 Sadik Yaqub, originally from Somalia, now lives with his family in Syracuse. Yaqub left Somalia because of the civil war and traveled to Kenya before bringing his family to the United States. When he isn't working, Yaqub often visits the Somali Bantu Community Organization for help with his English. | Glorianna Picini, Staff Photo

And that is exactly what the center did for Sadik Yaqub and his family. It was the one place where there was hope.

“When the civil war broke out in Somalia, the militiamen attacked our village. They tied me back and then killed my dad in front of me. And the blood was flowing under my feet, and my mom wanted to save me, and as she was running towards my dad … they thought she was attacking them and then they also killed her in front of me.”

Yaqub recalls walking for 25 days to Kenya. Once they arrived in the United States, Yaqub and his family were settled in Chicago.

From there, he said, “I moved to Syracuse because (of) my family members who live here and a lot of people speak (the language) here, and help us … I prefer to stay here after six months and then go back to Chicago.”

It isn’t coincidence that Somalis are coming to live in Syracuse. Here, Adan explained, “The help that is provided is free of charge to the people. Not all centers in the United States are free. A lot of them cost money.”

Yaqub describes the environment in Syracuse as, “My neighbor, my community.” Elsewhere, he said, it is more isolated. “My life, my own family.”

And now Yaqub is in an environment with many neighbors. Adan confirmed over email that there are about 500 refugees in the community. He also said that most of them live on the South Side because of public housing. Many of these families reach out to the center. 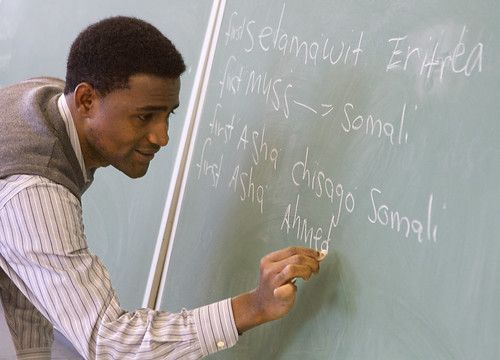 Omar Ahmed writes the names of his students on the board. Ahmed, originally from Somalia, moved to the United States in 2003 and has been teaching English at the Somali Bantu Community Organization since 2007. | Glorianna Picini, Staff Photo

The center offers a number of classes to help the families — English primary among them.

These English as Second Language classes help prepare the adults first to get by, and ultimately for jobs. Classes are very practical.

“Like when they are late for work, what do they say?” Adan explained. “How to prepare for interviews, making appointments or canceling with doctors.”

The center also helps the families get jobs. They pre-interview and find out what they like to do and then assess how well they speak English. Adan said that most of the families maintain jobs in housekeeping andcleaning or production and assembly.

The center also provides services to families with other issues, especially medical ones. When Yaqub had to get his kidney stones removed, the center assisted.

“I got big help from the community center transporting me back and forth, helping my wife to visit me because she cannot drive, and they fill out the forms,” Yaqub said.

For younger refugees, schoolwork is a top priority. 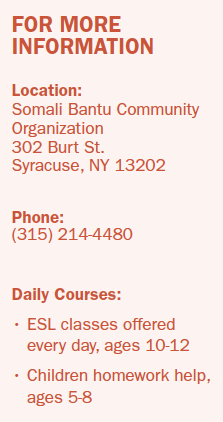 One student who drops in at the center on Mondays and Thursdays is Binti Omar, daughter of Yaqub. She has been helping her parents adjust to the culture. 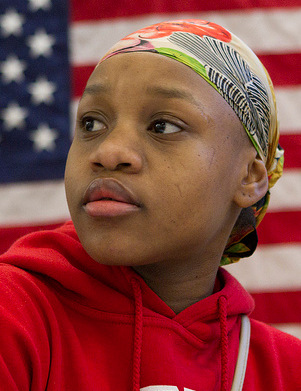 “Yeah, I always translate for my parents,” Omar said. “They get phone calls or doctor appointments.”

Still, English is youngsters’ second language, too, so they often need help with reading and writing. Adan said there are usually 25 to 30 students; 15 or so Syracuse University students come down to the center to tutor. They also offer enrichment programs for the students and do challenging debates on a popular topic.

The center also wants children to learn to think critically. “We make them talk, and come up with a solution and a problem,” Adan said.

Families get government assistance until they make enough to live on, Adan explained in more detail over email. He said that it depends on the family and the amount of income. If they make more than the poverty line, then they can be “cut off.” But, Adan said, usually larger families get extended help.

Adan has a goal of his own for the families.