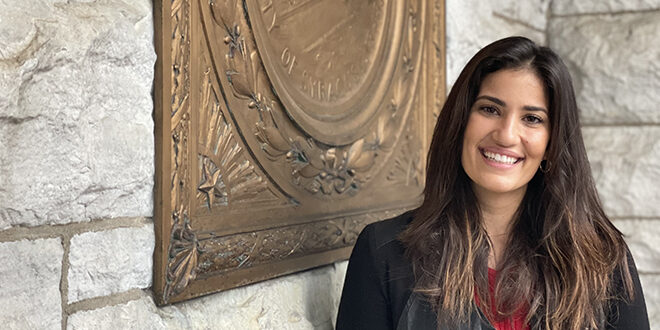 In addition to her new role, Jessica Vinciguerra serves as co-vice president of the Northeast Hawley Development Association and has volunteered on home renovation and property maintenance with Yeshua Restoration Ministries.

In the city’s most recent step in its ongoing battle to address childhood lead poisoning, Mayor Ben Walsh’s office announced Jessica Vinciguerra will join the city’s Department of Neighborhood and Business Development as Lead Program administrator.

In this position, Vinciguerra will primarily assist in the administration of grant funding for lead abatement, property remediation and other resources. “Jessica will play an integral role in implementing the Lead Hazard Reduction Demonstration Program grant, awarded to the city by the Department of Housing and Urban Development,” said Walsh in a press statement.

Vinciguerra has several goals for the position, including expanding resources to accommodate city residents who don’t speak English or who speak it as a second language. It’s a priority born from her time growing up around the North Side’s New American community. She also hopes to spread awareness of the resources that do exist and streamline processes as much as possible for impacted families.

“We all know what it’s like to end a workday and then have to fill out a form,” Vinciguerra said. “Time adds up and you just want to relax. So if we can make that process simpler (and can) create healthy homes, that’s invaluable.”

As a self-proclaimed “city kid,” she felt drawn to the coordinator position due to her own experience growing up.

“I’ve maybe spent a year and a half of my life living in a house that was built after 1978,” Vinciguerra said. She recalls in singsong the warnings of adults: “be careful of the paint; be careful of this; be careful of that; it’s not good for you.” Working for the city, she realized just how pervasive the issue is, how even invisible dust mites can poison toddlers.

“Dust falls on the ground. Toddlers are playing on the ground, sticking their cute little hands in the dust and then getting poisoned, and at no fault of their parents,” Vinciguerra said.

While Vinciguerra’s role is a step forward, Common Councilor Joe Driscoll points out that there is still more to be done when it comes to tackling the lead crisis holistically. Vinciguerra’s position is primarily focused on grant administration, not code enforcement, he notes.

“There are two big buckets with lead,” Driscoll said. One is “getting the money,” which falls under Vinciguerra’s purview. “The other bucket — the other struggle that we’re working on with lead — is the legislative side, making sure that gets enforced and implementing the proactive strategy that was part of the legislation that I advanced and that we voted on for the council.”

The city still has a search open for the code enforcement role.

“Code enforcement has been actively hiring for a lead paint program coordinator who I will be working in conjunction with,” said Vinciguerra, who said the hiring process is ongoing.

“The idea would be to have myself and someone who is on the codes team, who is overseeing inspectors who are actually in these homes every single day. (Dually they would coordinate) with me so that we can say, ‘this family needs an application; these kids are likely to have elevated lead blood levels; things of that nature,’” Vinciguerra said.

Vinciguerra attended Syracuse University, earning a bachelor’s degree in policy studies and citizenship and civic engagement in 2019. She joined the city part-time during her final semester at SU and then transitioned into a full-time role as the Northside Planner for the Department of Neighborhood and Business Development after graduating. In her previous role, she completed environmental reviews for the city and assisted in the city’s Lead Program.