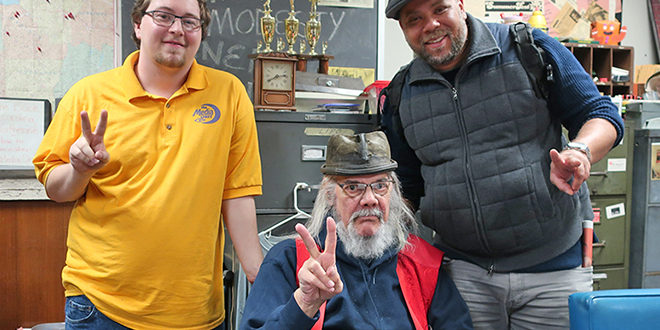 Alumni, community leaders recall their memories of The Media Unit

Lawrence Williams, with a big laugh, says he forced the creation of The Media Unit — by accident.

At about age 15, Williams says he and a group of friends were playing basketball off West Kennedy Street and were approached by three white men, who he remembers looked like college students.

“They asked if we were interested in being in a play and reading poetry,” he recalled. “We wondered, who are these guys?”

One in particular — “a tall, lanky, white, hippy guy” — stood out. Williams later learned it was Walt Shepperd.

Shepperd asked the group of boys the question that most piqued their curiosity: “Do you want to be on TV?”

With the then Southwest Community Center program director Bill Morris (later the theater department director at Le Moyne College), Shepperd helped lead Williams and six other inner-city teens in producing two plays as well as learning technical behind-the-scenes skills. In the late ’70s, Shepperd was working at then Channel 9 and made plans for the group to perform on live TV. After months of rehearsals, working on improvising, script writing and video production, the team was ready.

“When that big night came,” Shepperd remembers, “Not one of them showed up.”

He knew where’d they be, finding all seven back at the basketball court.

“We didn’t believe it was real,” Williams said. “That they’d really let us be on TV. After that night, we never doubted what Walt told us.”

They were granted a second chance. The 30-minute show the boys wrote themselves was about a rag-tag group of friends. One, played by Williams, fell on hard times, succumbing to drugs. In the skit, the friends offered support and by the end, they were transformed to singing sensations belting out “Be My Girl” in tuxedos.

Then to close the show, Williams looked directly into the camera and on live TV said: “Thanks for watching, and we’ll be back next week.”

He says he was just mimicking what he’d seen elsewhere on TV, but could see Shepperd off stage throw his hands to his head in dismay.

“So I guess I singlehandedly forced them to produce another show the next week,” said Williams, now the executive director of Syracuse Community Connections, which runs the Southwest Community Center. “The story will live in infamy that by accident I was solely responsible for ‘Rough Times Live’ that later became The Media Unit.”

Now after 43 years, Shepperd will step down from The Media Unit, his creation to help transform young people in Syracuse through the arts. The well-known teen production and performance troupe has tackled issues of racism, drug use and even school shootings in both a summer touring group and weekly TV show. The Media Unit’s board, alumni and volunteers will carry it forward.

CLICK HERE to View Photos from The Media Unit’s Past

“This is not the end, but a new beginning,” said Shepperd, who will stay on as a consultant for the group.

The unit will cease to run its summer productions, but will continue to produce the weekly TV show. Now that the studio at 327 Montgomery St. has closed, “Rough Times Live” will temporarily utilize the Onondaga Historical Association’s auditorium for a few hours each Saturday to continue filming, confirmed OHA Executive Director Gregg Tripoli.

On the last few Saturdays the former studio was open, many alumni dropped in to catch up and share their memories. A video compilation is in the works and will be shared at a June retirement party for Shepperd that board members of The Media Unit are planning.

“It will be a united effort,” said Sheridan, who views the network of alumni as an extended family. “While we’ll be starting over, we will carry on Walt’s mission.”

Many noted Shepperd excelled at not only getting teens involved in acting, but in writing, scripting, sound, camera operation and editing, as well as instilling responsibility, time management and confidence.

At age 12, Tammy Reese was brought to the unit by her mother.

“Donna (Reese) pretty much flung her into one of my auditions,” Shepperd recalled. “She told her, ‘this place is going to save your life,’ then walked out.”

From 1998 to 2006, Reese was active in the troupe and said it was the best training she could have received for the entertainment industry.

“Growing up on the South Side, I had joined a gang and become too much for my parents,” said Reese, who is now the founder of Visionary Minds, a local publicity, entertainment and media company.

“The Media Unit definitely saved my life,” she said. “I was able to be on TV, do touring shows, earn a college scholarship and become the successful business woman I am today.”

“Walt had a great way of making you accountable to yourself,” Williams added. It was a skill he honed over time — never doling out discipline, but developing self-discipline within young people.

“In order to have self-discipline, you need tools and skills,” Williams said. “What Walt was great at was setting expectations, providing practice and letting students oppose on themselves.”

Joe Driscoll, musician and common councilor for the 5th district, participated for one summer, preforming in the troupe’s well-known play “From the Back of the Bus.”

He said The Media Unit provided one of his first opportunities to see civil rights conveyed through the arts. “Walt saw the potential that art had to spark those conversations,” Driscoll said.

“Walt created this platform and vehicle for young people to gain skills they could use for the rest of their lives and he did it in a very nontraditional way,” Williams concluded. “He taught kids to not sit on the sidelines, but participate and be present in this thing called life.”