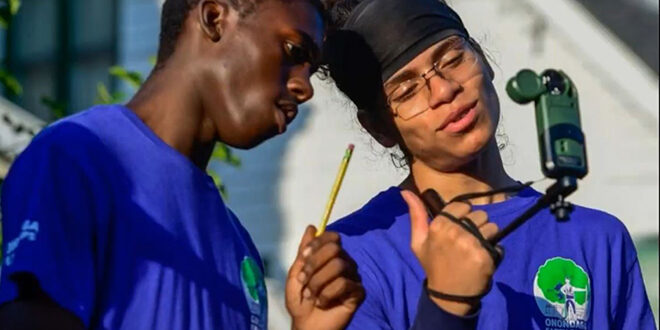 Throughout the meeting, AmeriCorp intern Terrance Valdes shared details from the group’s ongoing research on air pollution and its relationship to the Interstate 81 viaduct, identifying air quality as a key factor in individual and community health.

According to the original EPA study, the concentration of air pollutant particles was documented at the highest levels at sites closer to major roadways, while the concentration tended to decrease as distance from heavily trafficked areas increased. Valdes’ team intended to test the 2011 study in Syracuse to see if the same conditions were true, he said.

But preliminary findings from the OEC study seemed to suggest an opposite effect. The further away a location was from traffic, the higher the recorded concentration of particulate matter, said Amy Samuels, OEI’s education and outreach coordinator.

OEC researchers measured and analyzed air particle samples from test sites in the East Side, North Side, West Side and South Side neighborhoods over a period of several months. The particulate matter data recorded throughout this period was fairly consistent overall, Samuels said.

The OEC study offers a narrow scope of air pollution in the city, and the research could have been improved by collecting more data, Valdes said. The project also did not fully account for other factors besides proximity to traffic.

“Sometimes the more interesting things are the things that you’re not actually expecting to find,” said Jaime Mirowski, a SUNY-ESF chemistry professor and one of the Green Bag Lunch event speakers.

Mirowski’s SUNY-ESF research team at one point studied the presence of volatile organic compounds, or pollutants, near I-81, she said. Recorded concentrations were so low, however, that Mirowski’s team was also unable to directly quantify impact on individual or community health.

Air quality constantly fluctuates from day to day, sometimes even visibly, she said. Mirowski and her research team of SUNY-ESF graduate students at one point were able to single out individual days in Syracuse with significantly poor air quality — for example, during Syracuse University’s undergraduate move in days each August when thousands of new and returning students arrive on campus.

With more specific, long-term data, resources like the OEC study could one day provide researchers with the necessary insight to understand how Syracuse’s air quality will change during and after the I-81 viaduct reconstruction project, she said.

Even after the reconstruction project is complete, residents will need to remain vigilant in communicating with the city and Department of Transportation about what their communities need, said Lanessa Chaplin, assistant director for the Education Policy Center at the NYCLU.

The new community grid, which will be constructed to replace the 63-year-old viaduct, could reroute traffic in a way that minimally changes the amount of traffic going through the city, Chaplin said.

A major roadway, as defined by the DOT, serves at least 30,000 cars daily. If major roadways continue to impede on residential areas in Syracuse via the proposed community grid, residents will have to hold the city accountable for its next steps in addressing that issue, Chaplin said.

Without that accountability, Syracuse residents will continue to face the same traffic and pollution problems they’ve endured for decades: local traffic disruption, further air and noise pollution and the associated mental and physical health problems that accompany those issues.

Environmental justice extends far past an individual responsibility and the affected Syracuse residents, Chaplin said. From a broader perspective, harmful pollution targeted within communities of color is a national problem built on policy, she said.

“This community here has not only the viaduct, they have the steam plant, the railroads, the food desert and higher levels of lead (which) causes the lead hotspot,” Chaplin said. “There’s just so many burdens in this community that already exist.”

No matter what, Syracuse will need nuanced solutions to solve its complex problems related to environmental justice, Valdes said.

Those solutions can only come from continued trust and communication within residential communities and local environmental organizations, said David Rufus, NYCLU’s I-81 project coordinator.

“If we don’t take care of the people that we are serving or interacting with, then it tends to fall apart for folks,” Rufus said. “Like you plant those trees and you water them, people need the same kind of love and care as we go through this process.”