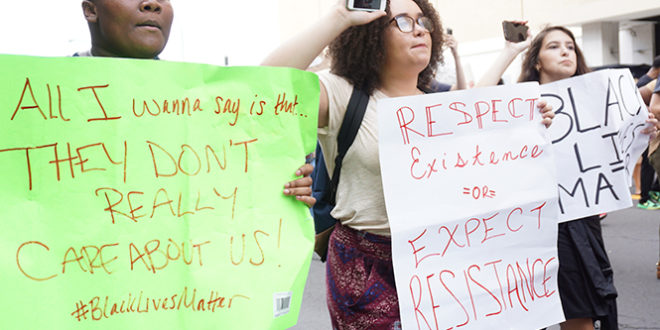 Alexandra Brooks, center, marches in one of the Black Lives Matter protest this past July. | Aline Martins

The Syracuse Student Union is a coalition of high-school students from Corcoran, Henninger and the Insti- tute of Technology at Syracuse Central (ITC) who meet biweekly at the Central Library to discuss social issues. Their goals are to advocate for student rights and provide all Syracuse high-school students with a platform to voice their concerns.

In order to achieve this, they have been working throughout the summer to get their name out and recruit new members. On the morning of two Black Lives Matter protests in July, they held their first rally.

“The goal was to send a message to promote our group,” said Alexandra Brooks, one of the group’s leaders. “We had students give some information about us and touched (on) some issues that are going on in the district.”

Alexander Veranes, a Henninger High School junior, started the group. He had heard about the original Henninger Student Union, which was organized in 2013 by Caleb Duncan, a current Syracuse University student and a graduate of Henninger.

Veranes reached out to Duncan and worked with him to re-establish the group. The word then spread to other high schools. Brooks, a Corcoran High School junior, started the Corcoran Student Union at her high school. Solomon Lawrence brought the idea to ITC.

Duncan has remained involved with the organiza- tion by attending meetings, giving the group guidance on their plans, teaching them about community organizing and connecting them with community leaders.

During one of the meetings over the summer, Duncan and Veranes were late because they had been at a National Action Network meeting together. 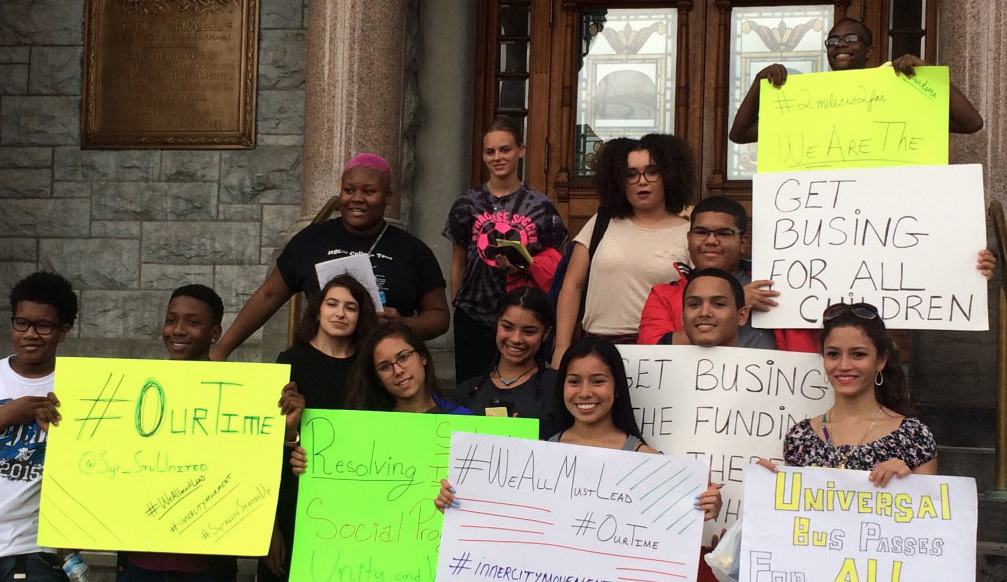 Members of the Syracuse Student Union organized and attended a peaceful rally, which coincided with the Black Lives Matter protest in July. | Photo Provided

“A lot of them are going through the same situations that I’ve been through, so I really try to treat them like siblings,” Duncan said. “Once I know that someone becomes involved, I hook them up with different places or different people that I know.”

Joyce Suslovic, a teacher at Henninger who is leading the Two Miles is Too Far initiative, is one of the community activists supporting the Syracuse Student Union. Since last school year, her group has been advocating to get bus passes for all students, regardless of the distance they live from school.

“They are not a single-issue group,” Suslovic said of the Syracuse Student Union. “So through it all, they will continue. They are totally committed.”

Besides partnering with Two Miles is Too Far on the issue of universal transportation, Syracuse Student Union also is partnering with David Chaplin, the administrator of the Citizen Review Board — a civilian oversight group — to train students on what to do during a police encounter.

“We have to start advocating for that,” Veranes said. “How important it is for people to know their rights and what to do if they are stopped by the police. If they file a complaint, we can provide further training on that.”

The rest of their goals for the year include hiring a paid administrator for the organization, instituting a dues system for members, fundraising, applying for grants, creating a scholarship fund, starting a marketing campaign and creating a training program on suspensions and restorative justice.

“We are all about rights,” Brooks said. “Our mission statement is to educate the youth on systematic issues, encourage involvement in social progression and to promote unity.”