Ajiyah Coleman doesn’t know what a Sankofa bird is or that her local library has a room named after it. All she knows is that she likes to read about African-American history and “all that kind of stuff.”

The 9-year-old Ajiyah, who lives across the street from the South Side’s Beauchamp Branch Library, visits the book sanctuary every day after school. Still, she may not be the only one unaware of the African-American Resource Center, or Sankofa room, tucked away in a quiet corner on the second floor of the library.

“What is a Sankofa?” Ajiyah asked. 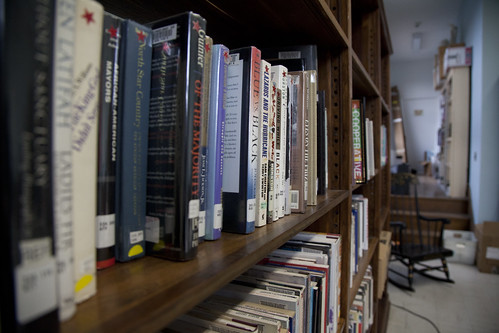 Sankofa is an African term from the Akan cultural group in Ghana, and it means “to go back and get it.” The bird is often the symbol that depicts that idea. On the wall in the corner of the resource center hangs a picture of two Sankofa birds with a caption below that reads: “Facing in different directions, they symbolize the need to learn from the past in order to prepare for the future.”

The Sankofa room opened in 1993 with the idea of having a collection of local and worldwide African-American resources to help the community learn about its history, said Dan Smith, a Beauchamp librarian. There were — and still are — books like “Notable Black American Women,” edited by Jessie Carney Smith, and “Facing History: The Black Image in American Art 1710-1940,” by Guy C. McElroy.

Pictures from as early as the 1940s, shot by famed local photographer and community activist Richard Breland, are also part of the collection. The photos capture moments in the lives of Syracuse’s African-American community. 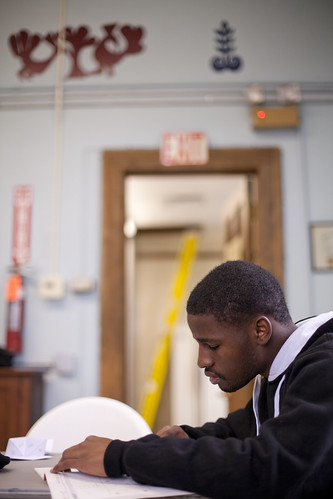 Brandon Dundas works on a practice test during a GED training class inside the Sankofa Room. -- Photo by John C. Liau

Over the years, the biggest challenge library staff faced was how to circulate books and resources from the collection, Smith said. Use of the room was limited because of its isolated location and need for a staff member to be present to help people find books. 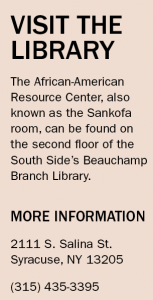 Eventually, library staff found that mixing the African-American materials in with the rest of the collection was the best thing for the library and the public.

“It just makes more sense for people to have them here,” Smith said, referring to the main part of the library on the first floor. “We are trying to make things more accessible so people can experience those nice little treasures we have.”

While Beauchamp librarians continue to integrate the collection, which they have been doing over the past year, the Sankofa room exists as a sort of multi-use community room, Smith said. Sankofa plays host to GED courses and offers a meeting space for small groups and organizations. The Beauchamp branch is still forming plans to repurpose the room, Smith said.

Percy Jones, who has been visiting Beauchamp Library for 30 years, said it’s nice to have a place for African-American books and resources. Although he was not familiar with the Sankofa room, Jones said it is important to represent cultures separately in a place like a library.

“If a person really wanted to know about African-Americans, there should be a special place they could go,” Jones said.

Although offering that special place was the original vision, having the materials accessible for community members to peruse and learn from was the ultimate objective.

Ajiyah said Beauchamp is her favorite library, and although she didn’t know the African-American resource books were there, she would like to read some of them.

“They have important parts in the story,” Ajiyah said. “I can learn how they talk and eat food or do ballet. And my mom would be glad to hear me learning stuff from the library.”