It’s unavoidable to walk down any street on the South Side and not come across at least one vacant or abandoned property. It is a familiar sight for residents: windows boarded up, wooden steps broken, shingles on the verge of falling.

The Greater Syracuse Property Development Corporation, commonly referred to as the Land Bank, might be just what the city needs as a remedy. Since November, the Land Bank has been sending out foreclosure notices to tax-delinquent properties, with promising results. 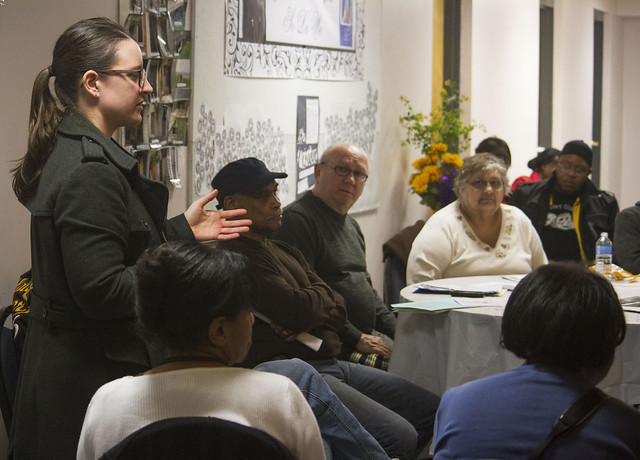 Katelyn Wright, a Land Use Planner with the City of Syracuse, speaks at a SUN meeting at Payton Memorial Temple. Syracuse United Neighbors is a community organization dedicated to improving the lives of families living in the neighborhoods on the South, Southwest and Nearwest sides of Syracuse. | Kirsten Celo, Staff Photo

“Having the Land Bank there is enabling the city to make a real threat of foreclosure for the first time and enforce property tax collection in a more aggressive way,” said Katelyn Wright, land use planner with the city of Syracuse. “It’s an independent not-for-profit corporation whose purpose is to assemble, redevelop and market properties that are abandoned and tax delinquent to get back into productive use.”

When one property is left vacant or is abandoned, it deteriorates and becomes an eyesore. And when it happens to one house, others follow because the need to uphold an appealing neighborhood aesthetic is no longer there, Wright says. The owners not only forget the property, but they also often forget to pay taxes — creating a fiscal concern.

The Syracuse Land Bank is one of the first five to be created in New York. Other places, such as Flint, Mich., and Cuyahoga County in Ohio, which Wright notes have been models for the Syracuse project, have Land Banks as well.

“Some (properties) are inevitably going to go vacant,” Wright said. “We need a big intervention like this. The Land Bank is going to be critical to reversing that trend.”

The South Side includes some historic properties, such as 350 Garfield and 1631 Salina Street. The need to preserve or rejuvenate these homes is greater than ever to restore a sense of pride in the neighborhood.

“If you can change the perception of a neighborhood, you can help attract people to move in,” Wright said on how to generate real estate interest in such areas.

In the past, the city has used tax auctions and lien sales to collect taxes and find a new property owner. But the city wasn’t always able to ensure what would happen with the property afterward.

The Land Bank method allows the city to take ownership of the property after a reasonable amount of time, given the owner has not already paid taxes or made attempts to remedy the tax-delinquency. It also enables the city to find qualified candidates who must demonstrate that they not only have the financial means, but that they also have a plan after purchase. 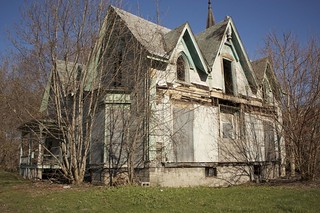 The South Side includes some historic properties, such as 350 Garfield Ave. The need to preserve or rejuvenate these homes is greater than ever to restore a sense of pride in the neighborhood. | Natalie Caceres, Staff Photo

“It’s going to be exciting and wonderful,” said Sharon Sherman, a member of the Citizens Advisory Board of Syracuse, a volunteer board that was appointed by the Syracuse Common Council. The board’s role is to advise the Land Bank on how to deal with properties once they are acquired and provide guidelines for management and disposition of real property within the city, Sherman said. They hope to have a draft of guidelines to present to the Common Council in the next month or so.

“Eventually there will be opportunities for people who want to do something positive with the property to be able to obtain it, fix it and make it their homes,” Sherman said.

Right now there are roughly 295 properties on the South Side that are seizable. The Land Bank’s process was put into motion in what can be described as a phasing method in conjunction with the change in the city’s tax collection system.

“Having the Land Bank there at the end of the day to accept title-to-properties that we foreclose on is enabling the city to make the real threat of foreclosure for the first time,” Wright said about how useful the Land Bank is turning out to be. “We can enforce our property tax collection in a more aggressive way and at the same time have positive outcomes for our neighborhoods.”

Here’s how it works: Property taxes in Syracuse are due on a quarterly system — once in January, April, July and finally October. If someone fails to pay for the entire year, the property becomes tax delinquent. That following April, the city sends out a notice that a one-year lien has been placed on the property. Once the lien expires, and given the taxes are still unpaid, the Land Bank has the right to seize the property, take measures to help prevent further deterioration and secure responsible buyers.

This past November, the city sent out the first batch of 200 notices. Working on a district-to-district assessment, property owners who had still failed to pay their taxes were reminded through the letter that once the lien expires, the city has the right to foreclose their property and transfer the title to the Land Bank. 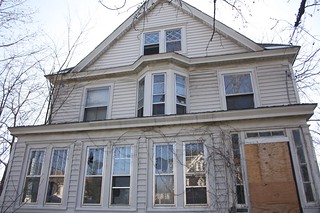 Another historic property in the South Side is 1631 S. Salina St. The Syracuse Land Bank is one of the first five to be created in New York and will work to resell such homes to owners who can restore the properties. | Natalie Caceres, Staff Photo

“Once the Land Bank acquires a single-family home, there will be no taxes left on it, no water bill, no liens,” Sherman said about the situation after properties are potentially seized this summer. “It will be up to the city for arranging repairs and anything else that has to be done, but it leaves possibilities for someone to become a homeowner.”

Vito Sciscioli, mayor of the board members of the Greater Syracuse Property Development Corporation, says that one major factor they are consistently working on is the financing of this endeavor to try to build revenue in as neutral a way as possible.

“The difficulties have been putting the financing in place,” Sciscioli said. He adds that the funding had been confusing for some so he, along with the other board members, have made it a goal to try to design their financial plan to best benefit the community.

“It’s taken a while to settle down for what the best way is to approach it. Right now we have a plan,” he said. “Once we get more rapport, we can see if there are better ways of bringing revenue or finding other ways of leveraging them.”

Part of the planned budget is dependent on whether the Common Council goes along with Mayor Stephanie Miner’s proposal to them. Sciscioli hopes that once the Land Bank picks up momentum, they can acquire new funders that have shown interest.

The focus of the Land Bank for areas like the South Side, and homes like the ones on Garfield and Salina, is not to try and foreclose as soon as possible and sell to a developer.

It’s quite the opposite.

“Our ultimate goal is to have owners pay their taxes and keep their properties,” Wright explained.

And it’s something she has already begun to see. Of the 200 letters sent out in November, 60 have resulted in payment of taxes or plans for payment so the properties no longer are in danger of foreclosure. Wright is happy with this result because it means a step in the right direction as the city works through a three-year backlog. 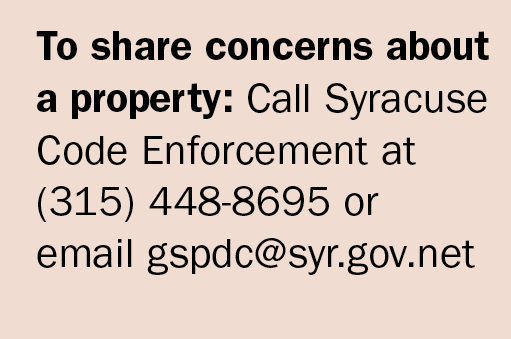 Wright is hopeful that this new system will help bring together communities like the South Side and strengthen their neighborhoods. She emphasizes, though, that residents can also help out by notifying the city if they have concerns about a property.

“Calling in those things to the city codes line will get results … all of the eyes that can help us are extremely beneficial,” Wright said. “I think that in the long term, people are going to want to come back to Syracuse.”