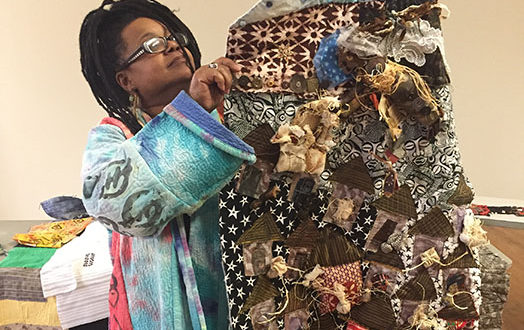 Vanessa Johnson holds up one of the hand-stitched quilts she showcased.

To help her tell a story, Vanessa Johnson holds up a hand-stitched quilt, showing it off before her audience of young children and their parents gathered in Beauchamp Branch Library one afternoon last month. Through its different colors and fabrics, she said, the quilt would help her with the story of the “South Side Angel,” a warm, protective spirit that watches out for little girls and boys. 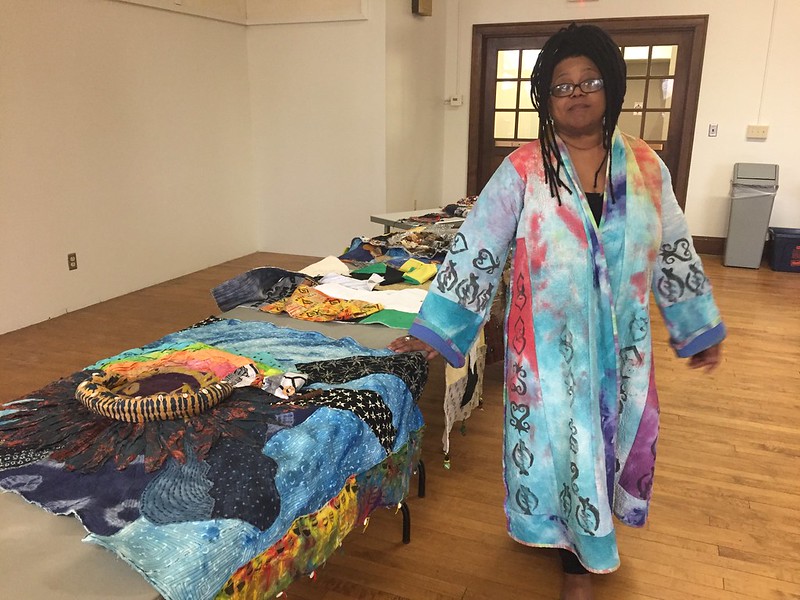 Vanessa Johnson with several of the hand-stitched quilts she created.

The angel protects children from bullies and gangs, Johnson said, reassuringly, as she displayed a fabric adorned with little rags and small pieces of cloth.

Later on, in an interview, Johnson mentioned that the rags were picked up from scenes of gun violence on the South Side. The story she tells the children doesn’t explicitly include this element of violence. She added that the angel wants to return to the skies to get away from the dangers of the neighborhood.

“I’ve been a storyteller since 2000,” she said, “but I grew up in a family that always told stories.” She has performed at The Great New York State Fair, at libraries and in cafes. Johnson also performs custom-made tales for special events, such as birthdays. She talks to family members, picks up details and puts together an act.

Johnson designs her quilts to honor the memories of women who have inspired a sense of social justice in her. Among the 22 quilts Johnson has designed, some of the   women featured on them are Holocaust victim Anne Frank and civil rights leader Fannie Lou Hamer.

Her experience with fabric and quilts goes a long way back; her father was an upholsterer who recovered furniture for a living, and her mother helped him.

“I was around fabric all the time,” Johnson said. 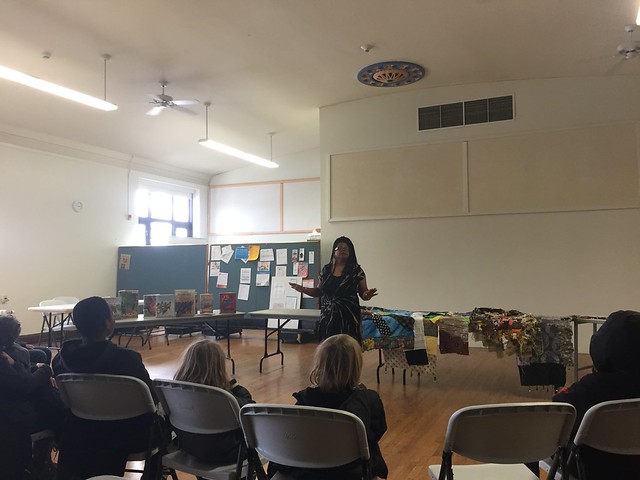 In her presentation at the library, sometimes she used a quilt to introduce a story; other times she simply spoke, with prose and poetry. Her repertoire also included singing. She had a commanding presence next to tables of several quilts overlapping one another, as she presented to an audience sitting in a semicircle.

Johnson’s act entailed either the enactment of a story from a children’s book or a demonstration of a story through a quilt that displayed detailed artwork.

Her performance blended compelling narratives and messages directed toward the audience. The stories of the underground railroad, Rosa Parks’ defiance, and the slave trade were told in honor of Black History Month.

Johnson performs for audiences of all ages, although children are her favorite. She said she loves it when children are engaged in her performance and actively participate. She explained that children realize storytelling is more than someone recounting events to them.

Johnson enjoys an interactive show. When she requested a volunteer to help showcase a blanket, almost every hand went up. Four-year-old Everett, who attended with his mother, Lisa GreenMills, was called to the center of the circle. GreenMills decided to bring her son to the show after browsing through the library catalog for something to do. She recognized  Johnson from a previous art fair and had liked her work.

“I like how she was singing and telling the story together,” GreenMills said. She added that her son liked looking at the fabric as it was being passed around.

Anne Gregory, the children’s librarian at Beauchamp, said Johnson had performed at the library a few years ago, and she was glad to have her back.

“I think they learn a lot from the stories,” Gregory said, adding that Johnson’s message about civil rights and standing up for others was important in the current political climate.