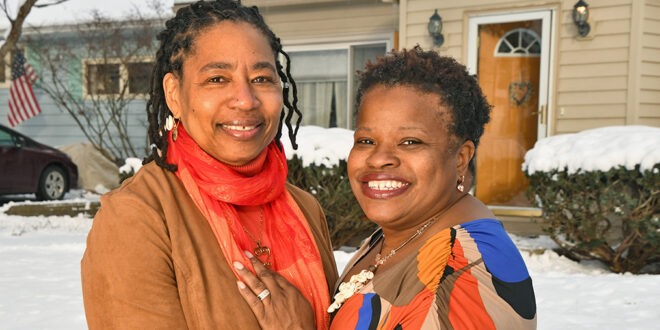 The novel coronavirus unraveled life, pushing countless into isolation and claiming the lives of others. Nevertheless, people and relationships adapted to this new normal.

In this year’s “Couples in Love” series, two local couples share the lessons they learned during the 2020 pandemic, as well as over the life of their love.

Surrounded by music and the soft warmth of a breezy summer night, the two sat quietly beside each other and friends at Tanglewood Jazz Festival. They shared a beautiful night together listening to the show’s featured artists perform soaring, often improvisational songs.

“It was electric,” Shantanette said. Neither woman could stop thinking of the other the next day.

After exchanging contact information with mutual friends, Paula broke the silence with a long email about wanting to get to know her and that unspoken gravity between them at the concert. Shantanette picked up the phone to call that night.

Ten years in, the love language they speak has evolved. Like the songs at Tanglewood, their life together formed gradually and spontaneously, too.

Navigating work and long-distance was a challenge to their relationship early on.

They’d stay up until late hours just talking on the phone at first, but over the years learned to anticipate needs, support one another and check in as well.

“We had to find a rhythm,” Paula said. “The interest and the desire was there, but we had to figure this thing out.”

The greatest challenges and losses they faced, she says, were what brought the two of them closer. Shantanette’s mother and Paula’s father fell ill over the course of their relationship, creating a need for the couple to take care of each other as they cared for their parents.

Paula would send Mother’s Day flowers for Shantanette and her mother, and her late mother’s love for them both has truly blessed their union, Shantanette said. Both of the couples’ mothers walked them down the aisle at their wedding, and Paula’s father danced with her as well. When Paula’s father, who has since died, grew frailer with his illness, they would stand on either side of him so he could lean on them both for support — a stance that somehow came naturally too, Paula felt.

“This is what you hope for, right?” she said. “But the reality of it is sometimes elusive. And that is that you can really count on someone. … You should be able to say what you need or what you want, but sometimes you don’t always have to.”

After much time living apart, a deep foundation in communicating has kept their marriage strong throughout the pandemic as well, Shantanette said. Working from home has taught her when to reach out for what she needs and how to define what space she wants, she said, pointing to evenings they sometimes spend doing different things on separate floors of the house.

Nevertheless, remote work took some adjusting to, said Paula, who currently teaches as a law professor at Syracuse University.

Before the pandemic, their work occasionally overlapped when attending school events or when Paula brought law students to visit younger students at Syracuse STEM at Blodgett Middle School, where Shantanette serves as dean of students.

Since the pandemic has limited their opportunities to see friends in person, Shantanette and Paula have both turned their focus toward the work itself and the physical and mental space they need to get through their work days, she said.

Despite other personality differences, Shantanette and Paula agreed both are well immersed in what it means to be independent.

Shantanette previously worked as a social worker in Boston to help people from all walks of life, including wealthy, closeted clients. The experience, she said, reinforced her gratitude for her own self-reliance, especially in terms of her sexuality.

Having never lived a “closeted life,” Paula also bases her outlook on core needs for simplicity and integrity without apologizing for who she is. Being self aware has taught her to prioritize self-respect and others’ respect above people’s approval.

“The rights that I fight for are for everybody to be able to live full lives,” she said. “That’s what my life’s work has been about. And to do that I’m not going to be less than who I am in the process. … The people who really matter to me are the people who recognize my whole self.”

More than almost anyone, Shantanette sees her for who she is, Paula said. Being together and knowing who Shantanette is for her family, students and community has taught and enriched Paula in many ways.

Like the magnetism that first brought them together a decade ago, that same love — whether spoken aloud or shared in silence — is mutual.

“With Paula, I have found my joy,” Shantanette said. “Being with her makes me want to be the best version of myself. I think that’s really important because I’ve been in love before. But this is the first time I’m in joy.”

COVID-19 stole a lot from Patrona Jones-Rowser and Sam Rowser, but the pandemic failed to take one vital thing: their faith.

Patrona contracted the novel coronavirus in March 2020 at the beginning of the pandemic’s arrival in the United States. Having the virus abruptly forced her away from her work as a hairstylist and event planner and into isolation at home in the South Side with her husband, Sam.

Because Patrona had been the only one with the virus, she and Sam were forced to stay apart for the entirety of Patrona’s 14-day, self-isolation period.

“The no-contact part is definitely hard,” Patrona said. “To just go from a couple who is very affectionate to not being able to touch each other, let alone hardly seeing each other, is lonely. It’s very lonely.”

The separation put an end to one of the Rowsers’ daily rituals, a tradition that had lasted for the length of their 19-year marriage.

“I always leave first in the morning and before I leave to go to work, I always kiss my wife,” Sam said. “I get up and get dressed and just before I go out the door, I give her a kiss goodbye and say, ‘I love you.’ Once this happened, there was no kiss goodbye.”

Of course, there was no “going off to work” either.

But instead of stir craze, the couple used their time together to draw upon the faith which brought them together and which they now share, Patrona said.

At the time, a new, painful reality of life in isolation and disarray was just beginning to dawn on our nation’s communities, she said. Syracuse, the city they have known and loved for their whole lives, slowly ground to a tense halt as local leadership began to realize the scope of the pandemic.

Patrona and Sam grew up at different times in the city, each bearing witness to decades of positive and negative changes. The son of a pastor, Sam was born into a devout religious life that he says he resisted at first.

Sam served in the military for three years, traveling across the world and country but finding little satisfaction in the places he saw that weren’t home. Upon returning, Sam worked in the admissions office at Onondaga Community College until losing everything he had to a struggle with addiction, he said.

Sam returned to the Syracuse church his father had preached at after spending time incarcerated. It was there that he began his path to sobriety and met Patrona — events that he sees as blessings from God to steady him on his way.

“God puts you where you’re supposed to be, and all you have to do is follow (His) direction,” Sam said.

Their first meeting also came at a time when Patrona had also begun to rediscover her faith. She had gone to church alone before, but this time she revisited it in a different mindset: as a new mother, Patrona said.

Sam remembers the clothes Patrona wore the Sunday they met, how she sat behind him and how he was drawn to her and the self-made confidence she lived and walked with.

Each week, the two would share small talk in the church’s parking lot while their true feelings lingered beneath the words, Sam said.

True to those unsaid emotions, their relationship eventually grew to something much larger as they confided in and supported one another, Patrona said.

After an unexpected halt in her plans to move to North Carolina, Patrona focused on their relationship together, undaunted by his new sobriety and the concerns some of her relatives voiced.

Patrona had seen him around before as a hard worker for the OCC admissions office and trusted that he could become the strong individual he once was.

“I felt like the two of us together were on the right path,” she said. “As long as we were together — as two but with God as three — I felt like we could conquer anything.”

As a couple, she drove around New York state with him to pay various ticket fines so he could get his driver’s license for a new job, she said. After getting married, Sam said they continued working to form space and closeness where they individually needed it within the relationship.

“We separated the money, but we didn’t separate our hearts,” Sam laughingly said of their unsuccessful attempt to share a bank account. “That works for us to be able to get through things: to be able to agree to disagree without being disagreeable.”

Born and raised in the South Side, Patrona and Sam have only further embraced and planted roots in their neighborhood since their marriage nearly 20 years ago.

As executive director at OnPoint for College, Sam works to grow the student program, which provides education and career guidance for young, underserved individuals. As she waits for the pandemic to subside so that her event planning business picks up, Patrona has recently dedicated more time to community organizations she works with.

In retrospect, the obstacles and frustrations in their lives apart make sense, knowing what he and Patrona have accomplished together, he said. They are proud to continue changing lives within the community side by side, he said.

Through it all, the life they have built is a direct result of their willingness to accept each other as they are, Sam said.