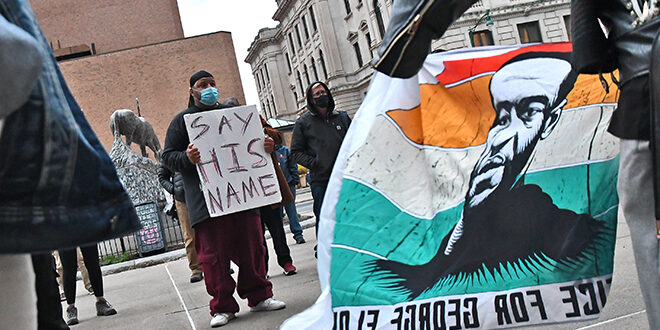 Demonstrators react to the Derek Chauvin guilty verdict in front of the Justice Center in downtown Syracuse. | Photo by Mike Greenlar

“This trial was about the right to breathe,” said Bishop Colette Matthews-Carter, president of the Syracuse Onondaga NAACP, of the verdict taking national attention.

On the evening of April 20, former Minneapolis police officer Derek Chauvin was convicted on all three charges against him: murder in the second degree while committing a felony, murder in the third-degree and second-degree manslaughter.

The sickening video that swept the nation sparked widespread outrage including protests last summer by local groups including Rebirth Syracuse, Last Chance for Change and the Syracuse Police Accountability and Reform Coalition (SPAARC). Questions now remain, how will all of this translate to reform? Local advocates, while grateful for the ugly oppression exposed, hope for more changes to come at both a state and local level.

“We would like to see very specific training that relates to cultural competency,” Matthews-Carter said. “We want to see more police officers of color hired, to reflect more of the community — not only hired, but recruited, hired, retained and promoted.”

In a Tweet Tuesday evening, Walsh swiftly responded to the national verdict.

Local organizers see this verdict as a catalyst for greater systematic change.

“I hope officers here in our city take heed to what happened and make the necessary changes they need to make as far as our department is concerned,” said Clifford Ryan, founder of OG’s Against Gun Violence (Our Generation Against Gun Violence). “The community needs to move forward and bring that trust back, because there’s that past of officers not being held accountable when they commit misconduct.”

Some stress this moment is pivotal, but we should not forget all who worked together to challenge racial inequalities.

“Every organizing effort over the last year has curated this reckoning,” said Angela Douglas, Alliance of Communities Transforming Syracuse (ACTS) president, in a statement. “It has been the disruption and the attention demanded to this human being and his life along with so many others that brought us to this moment. It has taken the strategic action of allies and accomplices to ensure that this would not take the usual turn.”

DeWayne Comer, now a community organizer with ACTS De-Incarceration Project and a Syracuse native who spent 21 years in federal prison on drug charges before being pardoned, reflected on his experience with the criminal justice system in light of this trial.

“This is the beginning of what Floyd had to give his life for,” he said. “You just don’t understand the criminal justice system when it’s in the background. It’s just so violent and it doesn’t care. It doesn’t care at all. So now to put it out there for everyone, it’s like snatching the curtain down — now everyone can see.”