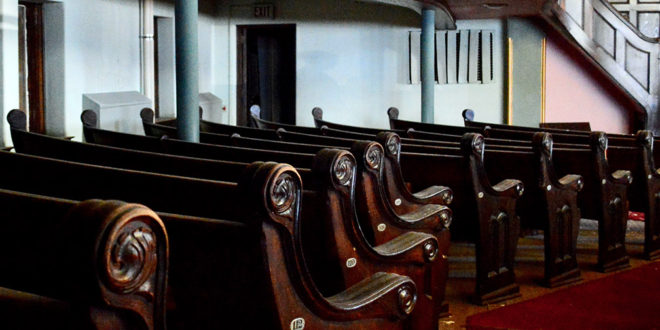 Pews inside the South Presbyterian Church. The abandoned property is currently owned by the Greater Syracuse Land Bank and listed for sale with an asking price of $35,000. | Michelle Morgan

This year’s Photo Walk was the first time The Stand’s annual event included a route specifically focused on the historic architecture of the neighborhood. Led by David Haas, who runs the @SyracuseHistory Instagram account, the path featured six South Salina Street stops to view 19th and 20th century religious, commercial and residential buildings.

“I love sharing wonder about Syracuse,” Haas said. “If we share enough wonder, we are going to change this city for the better.”

One highlight of the walk was a behind-the-scenes visit to the South Presbyterian Church at 2210 S. Salina St. with help from the Greater Syracuse Land Bank. The castle-like stone structure, which opened in 1907 with a 582-member congregation, was originally outfitted with stained glass windows and chandeliers from Tiffany Studios of New York City. The windows were removed in 2009 and sold to a collector. Once revered, the structure has fallen into disrepair. Still the building has lost none of its charm or possibility.

The walk also featured the Sumner Hunt Building on the corner of South Salina and East Kennedy streets. Built in 1878, the contractor’s initials and year of construction are embedded in the chimneys of the red brick building. In 2009, the architecture and preservation firm Crawford & Stearns was hired to restore the structure.

Among the beautifully maintained houses was the Dunfee-Kelly House, built in 1908 by Joseph Dunfee, a prize-fighting boxer and his wife. The home’s white stucco and timber-accented exterior, as well as its terracotta tiled roof, mark the house as Tudor Revival style. As the only home of this style in the area, structure represents the combination of late Victorian trends and the American Arts and Crafts Movement.

Several times along the walk, photographers came across old gravel driveways that faded into overgrown empty lots. These are remnants of the historic structures that have since been removed from the South Side.

One such location is 1632-1641 S. Salina St. The empty property once housed a Gothic Cottage and the Danforth Congregational Church, both of which were demolished in 2016. The house, built in the 1850s by Jon Clark and his wife Margaret, was one of Syracuse’s most iconic structures. The red brick church was added in 1884. Both aged to become victims of a situation known as demolition by neglect, during which a historic property falls into disrepair, becomes unsafe for occupation and must be taken down.

Demolition of historic homes can often break down the character of the neighborhood, Haas explained. Some residents are working to preserve the community through home maintenance. Anthony Turner has lived at 118 W. Borden Ave. for the last 24 years and has been renovating the property for the past two years in order to stay as long as possible.

“It’s definitely a great community,” Turner said. “Everyone has seen each other grow up here. Now (the neighbors) have grandchildren.” Turner reminisced about growing up in the neighborhood and running up and down the streets. “We used to go to Kirk Park until the sun went down and mom called us back home.”