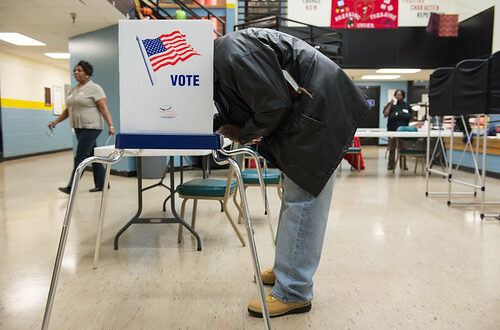 More people in Onondaga County can vote in Tuesday’s election than in any election in history.

The Board of Elections says 308,296 county residents are registered to vote, the most ever. That includes new voters who have registered since the 2016 election, as well as voters who were already on the rolls. The previous record was about 306,000 set in 2004, said Dustin Czarny, the county’s Democratic election commissioner.

South Siders no doubt helped contribute to this record. Several groups specifically targeted the South Side to increase voter enrollment and participation in the neighborhood. Groups see opportunity for greater political engagement on the South Side, which may in turn lead to more investment in the community, said county Legislator Mary Kuhn, the co-founder of Onondaga Votes.

“We had targeted an area of the South Side of Syracuse that has one of the lowest voter turnout numbers in the city,” said Kuhn, who also works on voter services for the local chapter of the League of Women Voters. “It is also an important place where people need to understand that their lack of participation also leads to a lack of resources.”

“What we saw was a plateau in the first year and then an increase in registration in both 2018 and 2019 to get ready for this year,” he said. “More people are registering than ever before and the makeup of them tends to be Democratic.”

Between April 2016, a few months after President Donald Trump’s inauguration, and the New York Presidential Primary in June of this year, the Democratic Party in Onondaga County gained 7,102 voters. Meanwhile, the Republican Party lost 2,194 voters, according to the Board of Elections.

The city of Syracuse saw a similar dynamic with Democratic registrations up 1,932 and Republican registrations down 809 over the same time period.

The county and city are following a national trend, Czarny said.

“You’re seeing growth in the Democratic Party and the non-enrolled voter class, people who are not involved in a party at all, and either a decrease or stability among the Republican Party,” he said. Czarny said he believes this is “a Trump reaction.”

Although the pandemic put a stop to traditional voter registration tactics, such as going door to door, registration numbers have nevertheless been unusually high.

Kuhn said part of the success of voter registration efforts on the South Side stem from voter education efforts that stress the importance of voting each year in local elections, not just in presidential election years. For example, she said her group emphasized how the district attorney is elected locally, how money comes into communities, and how local elections can directly impact people from the South Side.

“City schools, for example, were giving out lunch bags,” Kuhn said. “People could come and pick up lunch for their kids, and we had flyers in there with information about how to vote, how to get your application, and why it’s important to vote.”

“I think that really contributed to an increase (in registrations), and particularly to the party affiliation switch increase,” she said. “I think a lot more younger people who are engaged with civil rights issues and voting rights issues tend towards Democrat.”