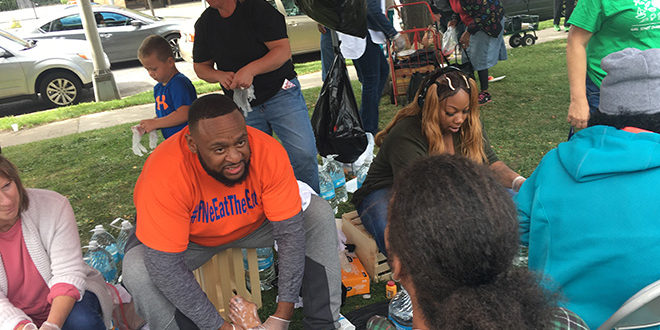 Founder of We Rise Above the Streets Al-amin Muhammad washes the feet of Syracuse’s homeless who attended the organization's final summer cookout last month.

Hundreds of members of the Syracuse community circulated through Billings Park for We Rise Above the Streets’ end of the summer Cookout for the Homeless on Sept. 22.

During the event, volunteers served hamburgers, hotdogs, cake, cotton candy and more to the waves of guests who attended. Community members and local restaurants donated the food.

The event also featured a DJ, and guests smiled and danced to the music throughout the afternoon. Other forms of entertainment included free books, sidewalk chalk and bubbles for the children. The cookout also had a foot-washing station, where volunteers washed guest’s feet and provided free socks and shoes. 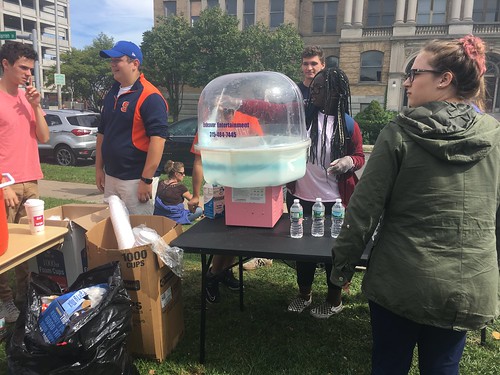 We Rise Above the Streets is a charitable organization that focuses on meeting the needs of the homeless community. In addition to organizing these cookouts, We Rise Above the Streets also hosts weekly “Sandwich Saturdays,” where volunteers make lunches and deliver other donations, such as clothing and books, to members of the homeless community, said Amy Venskus, a volunteer for the organization.

Harris Eisenhardt, a student at The State University of New York College of Environmental Science and Forestry who has volunteered with the organization since last summer, said they anticipated hundreds of people at last month’s event based upon the number who attend “Sandwich Saturdays.”

“That’s just a fraction of the entire population that’s actually experiencing homelessness in the entire city,” Eisenhardt said. “We like to think that it’s touching a lot of people, but also we can always do more.”

The event began at noon, and by 1 p.m., volunteers had already served more than 600 guests, said Al-amin Muhammad, the founder of We Rise Above the Streets. By the end of the event, they had served approximately 1,100 guests, he said.

This was the second cookout the organization hosted this summer. Volunteers hosted four last year, Muhammad added. The organization also partnered with other groups to host this most recent event, such as Team A.N.G.E.L., a group that focuses on helping and inspiring Syracuse’s youth.

The goal of the cookout was broader than providing food and essentials to the homeless community, said Nasirah Muhammad, a member of the organization and the wife of Al-amin.

“It’s getting the entire community together and trying to change the perception that people have of our homeless community,” she said. “People see somebody on the street asking for change or asking for something to eat, they don’t realize that’s somebody’s father.”

Nasirah said her husband organized most of the cookout.

“He’s very passionate. He’s real with it, and he loves the community,” she said. “I think that’s the most important thing.”

Venskus said she likes being a part of events like this because of how volunteering has changed her own perspective.

“I used to roll up my window and not look because I’m embarrassed for that person on the side of the street,” Venskus said, adding that now she carries things in her car specifically to give to those in need.

Nasirah says the organization wants to one day open a facility to further help the homeless community.

“That’s at the top of the list,” she said. “After you’ve met the basic needs of the homeless and underrepresented, then it’s time for training. It’s time to talk to them about sustainability and being able to sustain those things on their own.”

“I’m a humble person, but I’m going to be bold with this statement: I will end homelessness in Syracuse,” he declared.

Eisenhardt said he likes being a part of the organization because he believes the impact the group has is immediate, personal and lasting.

“When you see somebody struggling, give them another chance,” Al-amin said. “Give them an opportunity to change. Never ever walk past anybody unfortunate. Always smile. It’s not about money. It’s all about being kind.”

— Article and photos by Nicole Valinote, The Stand Staff Reporter