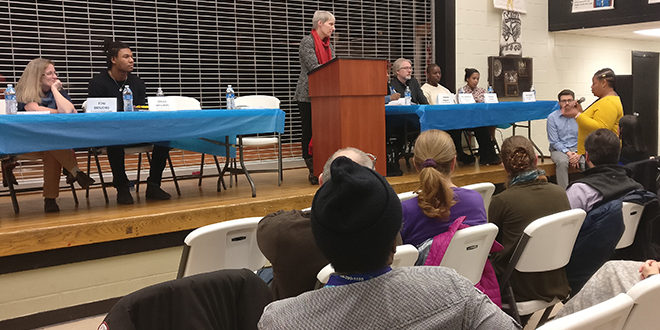 Sen. Rachel May on After-School Programming

On a comparatively warmer Friday night, Sen. Rachel May hosted a rounded table discussion Jan. 25 on After School Programming at the Syracuse Community Connections center.

Ever since May was appointed as the senator for New York’s 53rd District, nothing has stopped her from slowing down. From educating Syracuse residents about women’s rights to supporting local business owners, May has come a long way from being an academic. During the discussion, which was headed by leaders of various programs and organizations, the concern that stood out was the underpayment of staff who work at most after-school programs.

“We chose the issue of after-school programs — their potential and their challenges,” said May, explaining why the discussion was taking place. She introduced the six panel members, emphasizing their role in answering questions that have been perpetually posed to the education system in Syracuse. She added, “People doing the hardest jobs get paid the least in our society, and it’s just upside down of what it should be.”

Yolanda Seegars, director of community schools, said that through the three after-school programs and the Extended Learning Time (ELT) she overlooks, they are able to let students participate in things that they would not have the opportunity to do otherwise. They also assist in helping children learn different techniques to understand their emotions and hope that this generalization of behaviors in an “outside setting” gains support.

Ahmeed Turner from Say Yes to Education shared that in 2009, Say Yes to Education partnered with the Syracuse community. In that first year, he says, the organization launched scholarships for students. “And in 2019, we are now going on 10 years of giving students scholarships,” he said. “We’re going to keep doing that for a long time – that’s an amazing feat.” Say Yes to Education is a non-profit organization that fuels graduating high-school students’ aspirations in its Syracuse chapter. “I think there are many first-generation students that enter college, and I think that’s something this community can partner on or start to think about how to support those students when they are in school. It’s a major culture shock for those who have not been to college.”

Deka Dancil, who runs the Teen Center at Shonnard Street Boys & Girls Club, shared how her involvement with Say Yes to Education helped her attain a degree from Syracuse University. “It allowed me to get that education, to be on the other side of this table,” she added.

Kenyata Calloway, attendee of the discussion and program director Huntington Family Centers’ youth program, raised her concern about fund cuts that caused a decrease in staff numbers. “You can’t keep the people who don’t want to be here,” she said.

May opened that question to the panel, to which Turner replied by saying that collaboration would be the key to generating relationships that would eventually help in getting funds. “I think encouraging collaboration and not really competition would really, really drive that state in this community a long way,” he said.

When one of the attendees asked May about staff funds, she said,“This year, in the budget, the governor proposed in the human services area — no cost of living adjustment for workers hired by the state or funded by the state, which means they’re not even going to raise to keep up with inflation. That’s been true for several years now.”

She concluded the discussion by summarizing all the key points and reminded the attendees to share ideas, if any, for next steps they had. She said that bringing everyone together in a way that the programs were supporting each other is important in a variety of aspects to improve the Syracuse community. Being the first of its kind, May said that there would be more of these discussions in the future.

— Article and photos by Sajida Ayyup, The Stand Staff Reporter