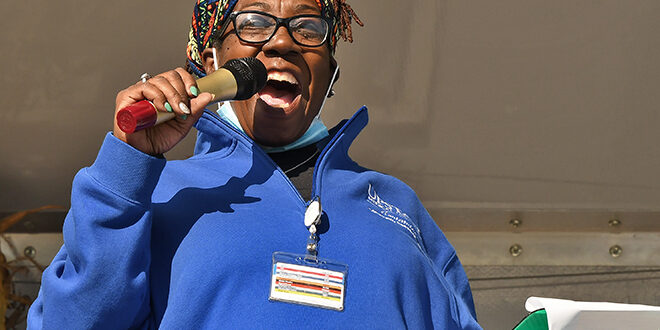 Not Alone: Aging as a Community

Leaves scattered across the parking lot of Syracuse Community Connections and became trapped underneath the bottoms of cold plastic chairs that were laid out for attendees at Seasons of Change, an event organized to bring older Syracuse residents together to learn about aging and aging well.

In those chairs, people sat bundled in hats and thick jackets, some in blankets and scarves directly under wispy overcast clouds. A crowd of older adults sat together, arms folded facing a stage under a graying sky. Bearing the brisk weather, they were determined to learn about healthy aging, conditions of memory loss, treatments and medical resources; topics that are often portrayed as gloomy and dismal on their own.

“How many people have had a ‘senior moment?’” Dr. Sharon Brangman asked. In the crowd, arms unfolded, and people quietly laughed while looking around at one another. While participants raised their hands in the air, clouds drifted and allowed the sun to sneak its way out.

“Now, we all have those moments. We forget things,” Brangman assured.

The Seasons of Change event took place Oct. 25 and was sponsored by Upstate Geriatrics and the Healthy Neighbors Partnership. It is the first of several community education and outreach programs that Brangman and Upstate Geriatrics have in store for the Syracuse community in order to promote aging awareness and healthy living.

Brangman is the department chief of geriatrics at Upstate University Hospital. As the division chief of the Center of Excellence for Alzheimer’s Disease (CEAD), she specializes in taking care of older adults who have problems with memory like Alzheimer’s Disease or various dementias. She works to establish clinical trial programs that examine new treatments.

“When you’re in school, you have to pick your specialty. Babies were cute, and it was fun to talk to children,” Brangman began to tell the crowd, “but I really liked older people because they had stories to tell. They usually were stories about how they made it through things that were really tough.”

According to a 2019 report from the Alzheimer’s Association, most studies indicate that Black Americans are nearly twice as likely to develop Alzheimer’s, while Latino Americans are about one and one half times more likely than white Americans. The report also shows that variations in health, lifestyle and socioeconomic factors across different races are likely to cause differences in risk for Alzheimer’s and other dementias. Similarly, The Alzheimer’s Association noted evidence showing that missed diagnoses of Alzheimer’s and other dementias are more common in older Black and Latino Americans than of white Americans.

Funded by the National Institutes of Health, Brangman began a project called Recruitment Accelerator for Increasing Diversity and Aging Research, also known as RADAR. The fundamental components of RADAR are: Finding someone who has knowledge and skills of developing relationships within a community, bringing people together in the community with researchers and creating research projects that are developed to reflect the needs of that community to ensure that research and trials have diverse participation.

In order to introduce RADAR to the Syracuse community, the initial step was to hire a community research liaison — someone able to develop and stimulate relationships within a community that Upstate Geriatrics wanted to work with.

From her experience in administrative and community-based roles at the Center for Community Alternatives, Access CNY, Women’s Opportunity Center and Catholic Charities, Royal has knowledgeable and vital connections to those who live in the Syracuse area.

“Seniors, we need you,” Royal said to those in attendance at her first outreach event. “Because when you feel good, the community feels good. We’re all here today to celebrate life and to help with our aging community in Syracuse. We are also here to hear about how to best take care of our health today and how we can help to bring better medical care to our communities of color.”

The project is not about how many people Upstate Geriatrics can get to participate since each trial calls for a different number of participants, Brangman said. Her goal is to nourish diversity within research and to establish relationships of trust and knowledge with Syracuse’s Black community.

“What we really wanted to focus on is the respect we have in the African-American community for our elders … and the role they play in helping to make the next generation healthy and fulfilled,” she said.

During last month’s event, different speakers, performers and artists initiated conversations about aging, community and healthy living through storytelling and reciting poetry. Vanessa Johnson, a griot — a West African historian and story performer — was one such performer.

“We as elders, We lay the path for the next generation. What our children, and grandchildren and great greats become, comes out of who we are and what we contribute to our community,” said Johnson, who opened her performance by starting in the past.

During the event she told a story passed down from her mother and one written by Sarah Loguen Fraser, the first Black woman to graduate from the Syracuse University College of Medicine. She was born in Syracuse in 1850 and the daughter to a former enslaved abolitionist, the Rev. Jermain Wesley Loguen. Her family used their Syracuse home as a safe house for hundreds of enslaved people who were traveling on the Underground Railroad. “One of the things is to recognize that you are not here alone,” Johnson said. “You didn’t just make yourself. You come from people … You come from people who have laid a way for you.”

While listening and learning from those who had the stage, participants were given sign-up sheets to learn more about aging, schedule appointments with Upstate Geriatrics providers and possibly participate in research studies.

Janice Thomas, 72, born and raised in Syracuse, came to Seasons of Change to get outside and be around others. But she left with a greater sense of importance towards senior care.

“I’ve been a senior for quite a few years now, but you’re always going to learn something new,” Thomas said.

Brangman said other outreach events like the Seasons of Change occasion are still in the works and will vary in size and forms. Some will be in smaller group settings and others will be larger — similar to the one last month which include around 20 to 30 people. Future events will also focus on Latino and immigrant communities.

“We want to go back and meet with people that we met earlier and continue to foster relationships and provide support,” Brangman said.

As the event wrapped, Brangman told the crowd: “This is not a ‘one and done,’ This is part one of what we hope is an ongoing relationship so that you get to know what kind of services we offer at Upstate.”

Syracuse residents interested to learn more about Upstate Geriatrics, its future outreach events and research studies are encouraged to contact Kathy Royal at royalk@upstate.edu, by phone at (315) 464-5540 or visit Upstate’s Department of Geriatrics website.