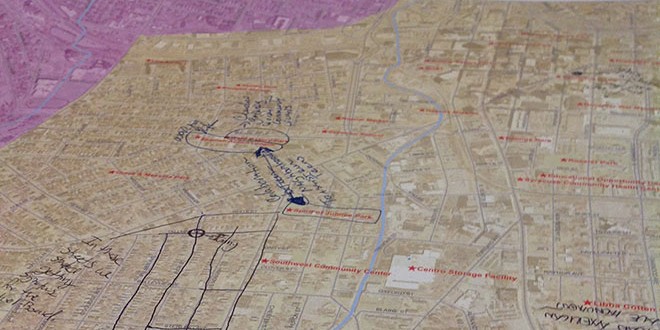 On July 14, Pete King, an activist with the Partnership for Onondaga Creek, rode his bicycle from his home on Thurber Street all the way to the Southwest Community Center to see the announced unveiling of an artistic map of the South Side.

He roamed the meeting room at the center looking for the map. He found a bowl with watermelon slices, a tray with muffins and a bowl with grape clusters, but no map. King was in for a surprise. He heard a voice yelling, “The map is not ready yet!” A visibly startled King plopped into a chair and so the second public meeting of the Reviving Place Project began.

Sarah Wraight, community educator at the Onondaga Environmental Institute (OEI), which commissioned the map, explained to the audience that the drawing of it was taking longer than anticipated. “It’s going to be a beautiful map to honor the South Side,” she said. “It will be framed and it will find a permanent home at the Southwest Community Center.”

Wraight encouraged the neighbors gathered at the event to continue the discussion on what makes the South Side lovable, regardless of the absence of the map. “The foundation of the first public meeting, held on June 16, gives us the framework and the tools to guide the conversation on what residents love about the South Side,” she added.

Then she summarized the 11 findings in this regard from the initial forum: friendliness, political activism, parks (Kirk, Onondaga, etc.), community centers (Southwest, Dunbar and others), old Victorian homes and churches, community gardens (Midland Avenue, West Newell Street, etc.), sense of family, programs helping youth learn skills and get jobs (Onondaga Earth Corps, Equal Opportunity Center and Jubilee Homes), Onondaga Creek, history, and the diversity of peoples and cultures living on the South Side. An example of this diversity, mentioned in writing, was the number of small businesses and nonprofits with names in Spanish: La Solucion Auto Repair and La Bodega de Peso, both on South Salina Street, and Iglesia Pentacostal Peniel on Valley Drive.

Louise Poindexter of Palmer Avenue provided a nostalgic note. “After I moved to the South Side from Westcott, I used to sit in my porch drinking a beer and neighbors passing by would come over with their own beers to join me,” she said. “Now the dynamics have changed with the new generation, with the sons and grandsons of these same neighbors.”

Amy Samuels, education coordinator at OEI, added that South Side residents loved having families in their midst that go back for generations. Samuels then concluded the event by saying that seven months from now the artistic map of South Side will be in display at Sainte Marie Among the Iroquois, a museum leased by the Onondaga Historical Association. “There is going to be an art exhibit opening with a reception at this site,” she said. “It will be fun and interactive.”

“I liked the fact that the map is based on thoughts from community members,” a relieved King said. “This way is better than having a map coming from the top down.”