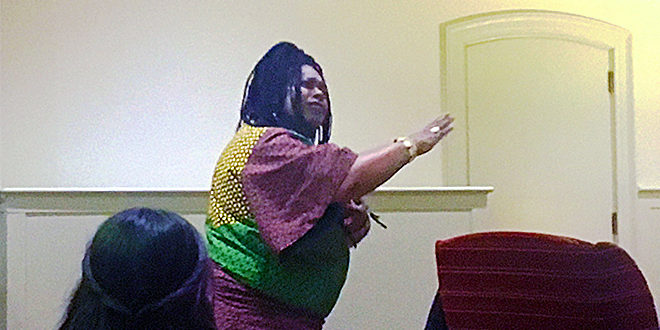 The story of historical figure Sarah Loguen Fraser, the fourth African-American woman to become a physician in the United States, was brought to life Dec. 6, as local storyteller Vanessa Johnson performed her life story in Hendricks Chapel at Syracuse University. The event was organized by WiSE Women of Color in STEM. WiSE is an acronym for Women in Science and Engineering.

The organization seeks to empower and build a sense of community for women of color who are pursuing careers within the fields of science, technology, engineering and mathematics. These subjects have traditionally had less women and people of color.

Being a woman in these male-dominated fields can create a feeling of isolation for women and difficulties adapting to a highly competitive, highly individual culture, said Sharon Alestalo, the WiSE program director. Alestalo also noted many SU students in these programs can complete their degree without ever having a female professor or a professor of color, adding minority students may often be the only representation of such in the entire class.

Alestalo said WiSE hopes to show minority women that there is a historical precedence of women of color becoming doctors through this event.

“It’s not a matter of fixing the women [in the STEM programs],” Alestalo said. “The women are strong.They’re smart. They are more than capable of being scientists and engineers. None of those are in question. It’s how do they learn the strategies to ensure their own success.”

Johnson is a griot, a storyteller in the West African tradition. Johnson said she tells the stories of historical women and modern women alike. She was first introduced to Sarah Loguen Fraser’s story when she worked at the Onondaga Historical Association.

“I love talking to kids about, ‘so what are the stories that are going to be told about you?’” Johnson said, in an interview prior to the performance.

Johnson performed LoguenFraser’s story through first-person monologues in the historical figure’s perspective, along with the perspective of others from her life, including runaway slaves she encountered. Johnson used documents created by Loguen Fraser’s daughter to influence her performance.

At the event, audience members learned through Johnson’s stories that Sarah Loguen Fraser was born in1850 in Syracuse. Her father was a runaway slave. Growing up, she and her family helped other African Americans escaping slavery. Loguen Fraser was inspired to become a physician after witnessing the injuries of those her family helped, and ultimately studied medicine at Syracuse University, becoming the first African-American woman to graduate from the program.

“Out of what she saw of suffering in her life and the example of service she saw with her parents, she becomes this doctor,” Johnson said. “She dreams the impossible dream. She dreams a big dream of going into medicine at a time when women were not welcome as doctors, certainly not African American women.”

Undergraduate and graduate students attended the event, along with some local children.

Johnson said she seeks to inspire the children with these stories to show them that the situation they are in right now does not have to stop them from being all that they can be.

Johnson said sometimes people approach her after her performances and say they’re sorry for what happened to her, not realizing she was playing a role.

Brooke Waldon, a senior biomedical engineer major at SU and a member of WiSE, said she found the event inspiring. Waldon added that she wants to be a doctor as well, but did not know about Loguen Fraser before watching Johnson’s performance.

“You forget that you’re not listening to Loguen Fraser herself,” Wilson added.

Johnson said women like Loguen Fraser have created a path for women of color to become doctors by setting an example of how she overcame struggle.

“It’s inspiring to see someone in our history that looks like me that I’m now going to walk in her shoes,” Wilson said. “I’m so glad I came.”

Johnson said that she hopes to impart this same message to the women and girls who watch her performances and demonstrate the importance of inspiring other young girls in the Syracuse community to show them that they can become doctors too.