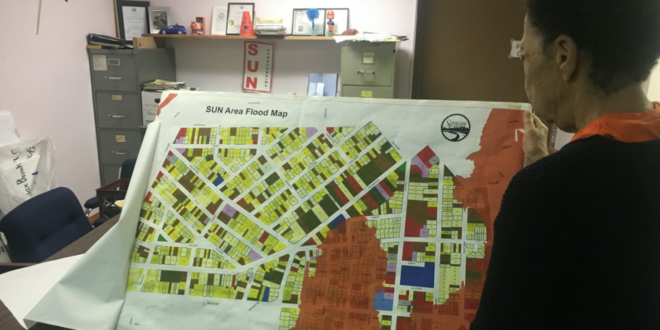 Gwen Chaffin, a community organizer from Syracuse United Neighbors, reviews a map of flood zones in Syracuse that have been newly designated by the Federal Emergency Management Agency.

About two and a half years ago, the Federal Emergency Management Agency designated Cheryl Leavens’ home in Oswego, New York, as part of a flood zone, requiring her to enroll in a mandated flood insurance program.

The fee was added to her mortgage, making her monthly payment go from $264 without taxes to $349, averaging a new yearly expense of $1,000.

“Between that and my taxes and everything else going on, I don’t know. Some months I just pray that I can hold on,” Leavens said. “I’m considered retired, but I still have to work just to pay the mortgage, the taxes, and that extra $1,000 a year.”

Many Syracuse residents now share Leavens’ sentiments. The addition of 876 properties to FEMA’s flood zone map of Syracuse — most located in low- to moderate-income neighborhoods along Onondaga Creek on the South and Southwest sides — has residents searching for methods to cover the new expense and politicians scurrying for ways to alleviate the burden before the maps take effect Nov. 4.

On Oct. 24, the Syracuse Common Council passed a resolution asking state legislators to give affected homeowners a break in property taxes on a sliding scale, from a 5 percent exemption for households earning $37,400 or more to 50 percent for those making less than $29.000.

But to many, including Councilor Khalid Bey, the tax exemptions might not be enough. The flood insurance requirement will add a new expense — between $200 and $2,000.

“That could be an immediate solution to people, but even still we’re going to lose some people through the cracks,” Bey said.

Bey anticipates that the inability of some to pay the new expense might lead to many losing their homes.
“When you get these persons on fixed income, who may at some point had a decent job, you could very well be putting these people out of their homes,” Bey said. “If the bills become too much, the potential for them to fall back on their taxes is troubling.”

The home of Joanne Stevens, a retired home health aide, was newly added to the flood map list, but even after repeated inquiries and attending a FEMA informational session, she still does not know what her monthly payment will be. Stevens said the public was not given enough time to resolve their new expense.

“We heard in August that we were going to have to pay flood insurance in November. That’s a few months. I’m on a fixed income, and I’m retired. Had I been working, I might have been able to do something,” Stevens said.

Her fixed income includes a pension worth $754 a month and extra money she gets from renting an apartment in her home, but she’s afraid she still won’t have enough to cover the flood insurance.

“The only thing I can do at this point is just pray. Throw the bills in a hat and pull the ones out for that month and whatever comes out that’s what I’ll pay. When you’re faced with that, what do you do?” Stevens said.

“If you call an insurance company, they can’t tell you anything because they don’t know anything,” Chaffin said.

SUN distributed nearly 500 fliers about the two FEMA informational meetings back in September, but she says they were poorly attended. If people have not seen the FEMA-related postcard alerting them of their flood zone status, they may still be unaware of the new expense they will have to incur, Chaffin said.

“I have a feeling when November comes, we’re going to be getting a lot of calls,” Chaffin said.

SUN has reached out to several officials, including Congressman John Katko (R) and Senators Chuck Schumer (D) and Kirsten Gillibrand (D), and has received responses from Katko and Schumer.

One of the solutions SUN thinks the government should look into is dredging Onondaga Creek. Bey said the city already dredged it in the past, and might look into it again.

“We hope that FEMA or the feds allow us the funds to do it,” Bey said. “The city doesn’t have that kind of ability, you have to outsource that service.”

Onondaga Creek does not have a history of flooding — except for once in 1974 due to a burst pipe, not a natural disaster — leaving residents like Stevens and Bey to wonder why flood insurance is mandated in the first place.

“We were told that the data was based on history, but if our data’s based on history and the city’s creek has never flooded, you’d expect that the prediction would be closer to the history, not some idea that it would someday flood,” Bey said.

Stevens thinks the Council should take money from other projects, like the Onondaga Creekwalk, and put it toward this.

“We’re getting ready to have to pay all of this money and flood insurance and you’re talking about building a creek walk,” Stevens said. 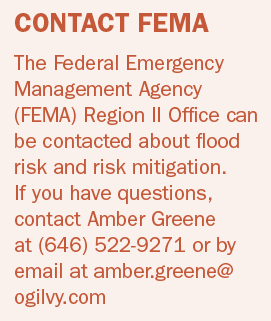 “The city doesn’t have the money to bail people out in terms of their homes when we can’t even fix infrastructure and we don’t know what that bill is going to look like,” Bey said. “The feds who created this are the ones who are going to have to put the solution in place.”

Abdul Shakir, chaplain of Syracuse’s National Action Network and whose home was not included in the flood zone, said it should be up to the homeowner whether to purchase flood insurance.

“You shouldn’t be forced to pay something that you don’t have the funds to purchase,” Shakir said.
Bey is in talks with Congresswoman Maxine Waters’ office, which is working on legislation to address flood insurance affordability, but the proposal would not come until 2017.

“This is a very bad situation,” Bey said. “The government needs to act fast.”