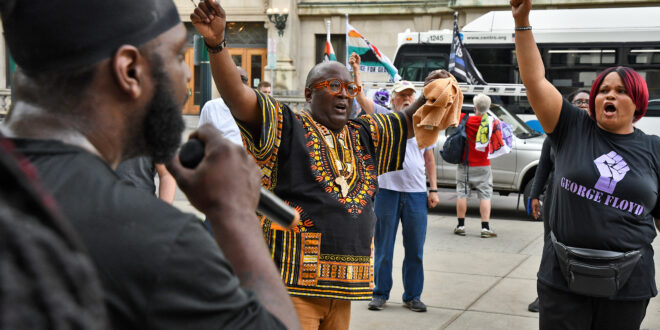 Marchers chant with raised fists as they gather in front of the Public Safety Building in downtown Syracuse. At center is Bishop H. Bernard Alex. | Mike Greenlar, Staff Photographer

Dozens of demonstrators and activists marched toward the Syracuse Police Department building downtown Tuesday, May 25, in commemoration of the one-year anniversary of the murder of George Floyd, rallying behind cries for just policing and calling for an end to police brutality.

The march — organized by Bishop H. Bernard Alex of the Victory Temple Fellowship Church, as well as ReBirth Syracuse and the local chapter of the National Action Network (NAN) — started at the church’s parking lot. It was billed by activists as a “peaceful but powerful” demonstration. Demonstrators then made their way to the John C. Dillon Public Safety Building, displaying flags and signs in support of local organizations — united by chants such as “whose streets… our streets” and “No justice. No peace; no racist police.”

“Today we want to call the police to action, but we also want to declare that our families and community have got to do something,” Alex said, addressing march attendees regarding community building and the strengthening of relationships between city neighborhoods and police.

Demonstrators noted that the march signified community support, while also highlighting the importance of honoring Floyd. The murder of Floyd at the hands of Minneapolis police officer Derek Chauvin in May of 2020 caused ripples across the country, sparking the largest mass movement in recent U.S. history and forcing elected leaders in New York to revise policing at the state and local levels.

“I think we have responded pretty well. We have sent as strong a message as any other city nationwide,” he said. “At the same time, we have kept our composure and handled (protesting) properly. That was important for me during the height of the protests, showing a leadership role and being a role model so that no one got hurt by the police department. That was a success as far as I am concerned.”

Reflecting on the protests against police violence that occurred in Syracuse last summer, Ryan said strong community leadership was important in brokering peace between demonstrators and law enforcement.

“All over the country, you saw people getting pepper sprayed and beaten up by police, and it is because they did not have that structure with the protests,” Ryan said, adding he tried to encourage positive interactions between protesters and police during last year’s demonstrations.

Ryan, who also serves on the city’s Citizens Review Board (CRB), said city officials have made “good” strides in improving relationships between community and law enforcement with the approval of the city’s Police Reform and Reinvention Plan launched earlier in the year.

The plan, which was mandated by Gov. Andrew Cuomo last year via executive order, promotes community engagement and fosters trust, fairness and legitimacy, and addresses racial biases and disproportionate policing in communities of color, explained Syracuse Deputy Mayor Sharon Owens during a public hearing in March.

Lori Nilsson, who also sits on the CRB, said state and local officials have “responded well” to the calls for action, citing moves such as the repealing of the state’s Section 50-a of the state Civil Rights Law — a measure that for decades had been used by police departments to obscure officer disciplinary records from public view — as net positives.

“I think the fact that the mayor and the chief of police have gone all around the city gathering input from the community on the changes that need to be made is good,” she added. “They have also met with (the CRB) several times, and we have suggested several policy changes. I think the city has responded well, but there is always room for growth.”

Areas for improvement, Nilsson said, include better communication between citizens and law enforcement.

“I think there is a mutual distrust. Just as not all citizens are bad, not all police are bad, and we need to acknowledge that,” she said.

Nilsson said continuity is the important element when it comes to pushing for change.

“One of the problems with a lot of movements is that in the beginning there is a huge push and everybody is on board,” she said. “As time goes on, people get tired and leadership gets tired of being leaders and not having a lot of followers. I think we need to make sure the momentum keeps going.”

Other advocates stressed the importance of focusing on the issues faced by young people in the Salt City.

“There is a lot more going on in Syracuse than what you see in the news, and we need more people actually out here speaking with the people of the community on what the major problems are,” said Kayla Johnson, a community organizer with Last Chance For Change and a candidate vying for an at-large seat on the Syracuse Common Council.

Johnson encouraged city residents to “speak out” on the issues.

“Stop being scared. Me being by myself is not going to go anywhere. I need help moving a mountain,” Johnson said to replies from the crowd saying “we got you.” “All I ask is that people actually come out and help this city. We cannot fix it by ourselves. There are major problems right now. Our youth is struggling right now. I know with the right help, we can get where we need to go.”