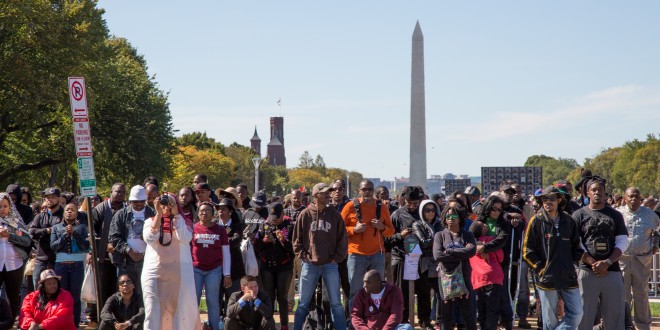 Residents Journey to Justice or Else in D.C.

Two buses full of community members, college students and youth groups set off from Syracuse just after midnight on Saturday, Oct. 10, to attend the Justice or Else gathering in Washington, D.C. after a seven-hour journey with a stop for breakfast, the buses unloaded in the nation’s capital amid hundreds of thousands of others convened for the same reason. 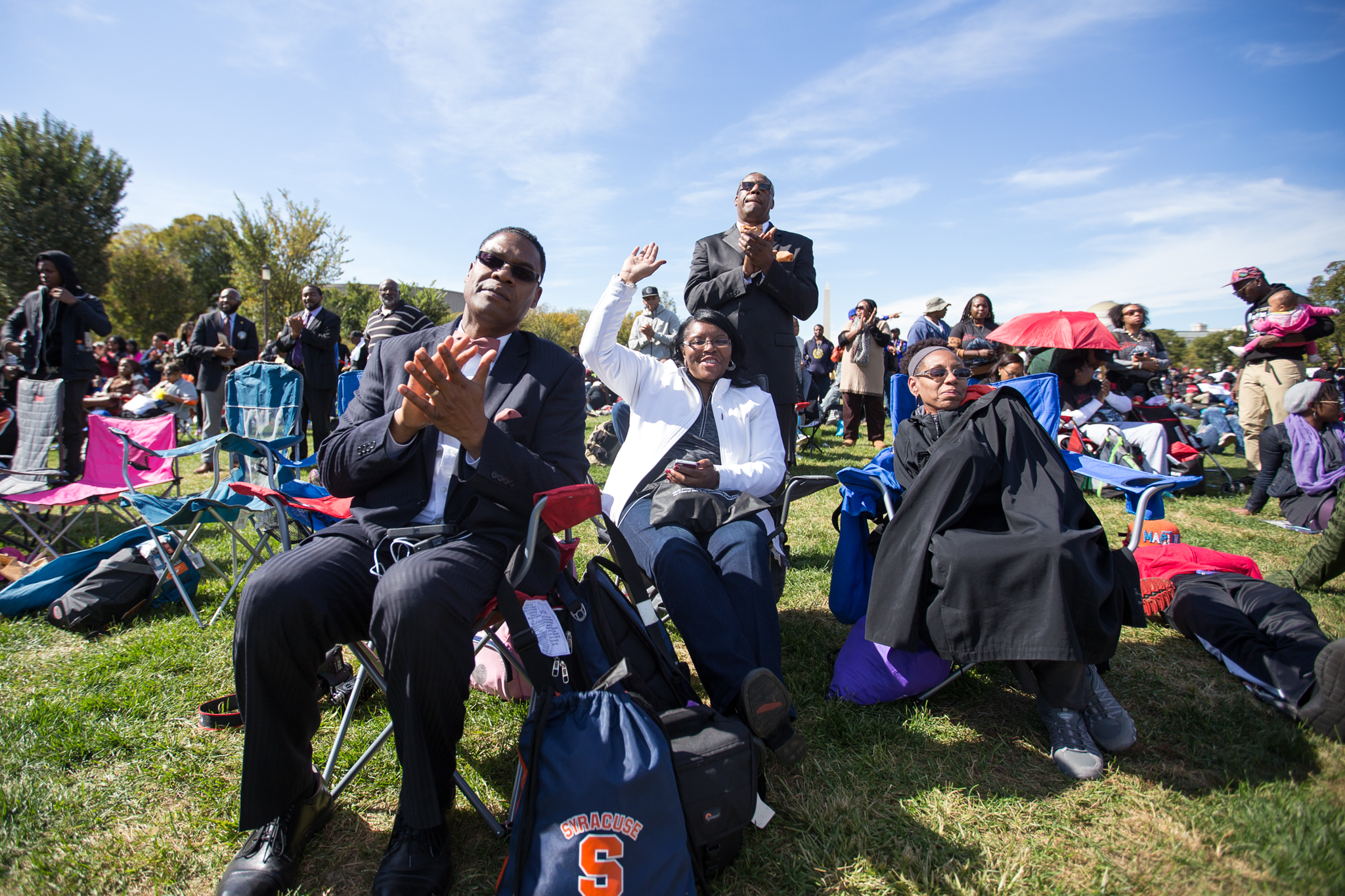 People from the bus gathered and cheered at the National Mall while listening to the keynote speech by Louis Farrakhan. | Photo by Yu Hua

Speaking from the U.S. Capitol Building, Minister Louis Farrakhan of the Nation of Islam addressed the crowd at 1 p.m. concerning issues of the black family, economic mobility, religion and history. Other speakers throughout the day discussed a range of topics, including justice for Native Americans, healthcare, homelessness and mass incarceration. Muriel Bowser, the mayor of D.C., encouraged attendees to sign a petition granting the city statehood, citing taxation without representation as a factor.

Rashawn Sullivan, from Syracuse, attended the march because he felt his beliefs aligned with those of unity and justice being promoted at the gathering. “It was important because I came up under this tutelage. I’m not the Nation of Islam but I do adhere to a lot of the truth that Minister Farrakhan has spoken,” he said.

Although the event was organized by the Nation of Islam and commemorated the Million Man March, people of all ages, races, genders and religions attended. Davon Hunter, from Syracuse, organized a group of 50 adolescent boys, ages 12 to 18, to expose them to the march for justice atmosphere and to discourage them from engaging in destructive behaviors at home. Hunter said he felt that many of the men lost to violence in Syracuse are in the 18- to 25-year-old range, so he wanted to impact these boys before that.

“We’re losing a lot of young black men,” he said. “I thought it would be wise to go a step ahead of the people we’re losing, so why not catch the ones that are younger than them so they don’t follow the path that the 25-year-olds are following. If we catch them now, it increases our chances of getting them in a positive direction.”

While much of the dialogue was convoluted and cryptic to the boys, they still gained a new perspective from being in the atmosphere surrounded by those supporting the same cause.

J’Mhye Baker, 13, knew about the history of the Million Man March because his grandfather attended it 20 years ago, but still came away with new knowledge. “I learned more about Black history, and I learned what the [Pan-African] flag represents,” he said. “The red is for the blood of our ancestors, the black is for our skin and culture and the green is for our land and nature.”

Visitors to the national mall sported shirts and sweatshirts adorned in popular sayings, like “Black Lives Matter,” “Stop Police Terror,” “Legalize Black” and “Justice… Or Else!” Children waved flags of the different countries in the African Diaspora as well as the red, black and green striped Pan-African flag; activists chanted and marched while holding signs that said, “My Life Matters” and “Straight Outta Patience.”

Vendors sold souvenirs like T-shirts, wristbands, buttons, artwork and music and some employed unique methods of attracting customers to stand out from the numerous others.

Artist Tony B. Conscious used his freestyle rap rhymes to entice passers-by to his artwork about black culture that included images of black leaders and historical moments.

“Twenty years ago I came to the Million Man March, so 20 years later I’m still doing my part,” he rapped. “Whether I’m doing it with spray paint and a stencil, or over an instrumental, I got to do it for my kinfolk and make it monumental.” 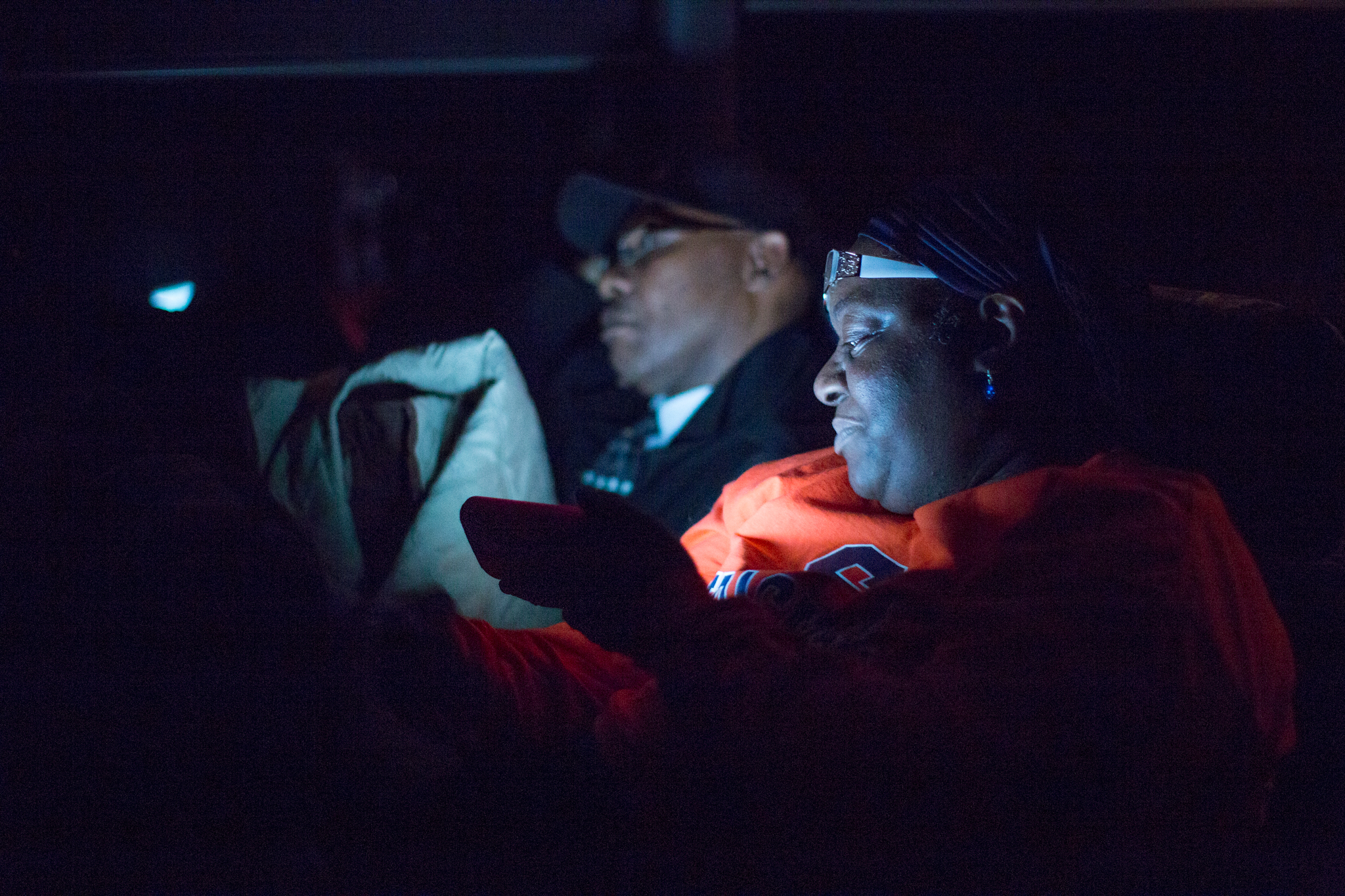 Brenda Muhammad remained awake and watched her phone at midnight after the bus started off from Syracuse. |Photo by Yu Hua

Brenda Muhammad, a member of the local organizing committee of Central New York that coordinated the trip from Syracuse, said she felt relieved that all of her work culminated in a successful trip for the attendees from Syracuse. In addition to Hunter and his crew, other groups that went from the area included Pretty Girls Rock and college students from Syracuse University and Le Moyne College.

To close his speech and the event, Minister Farrakhan urged the crowd not to give up in the fight for fairness and truth, and engaged the people with the call-and-response, “Justice…or else!” chant.

“It’s not over; it’s just begun,” he said. “This day of a demand for justice will never end, until justice is ours.”