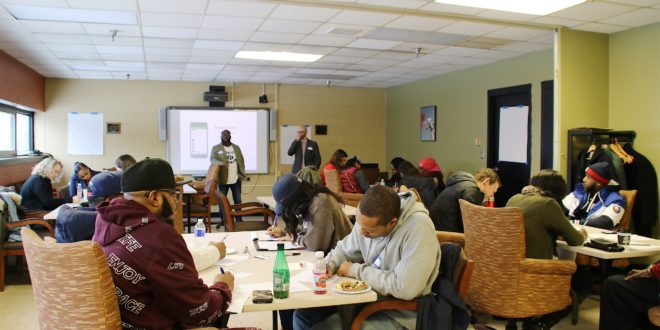 On a snowy Saturday morning last month, 18 residents gathered at Syracuse Community Connections. Participants helped themselves to some breakfast on one end of the room and took a seat at the tables filled with colored sharpies, black sheets of paper, name tags and stickers.

They were there for a workshop held by the Trauma Response Team (TRT) and the tech start-up Zivics. Most of the attendees were leaders in outreach programs and nonprofits. They all brainstormed ideas for a mobile app designed to send public safety alerts and engage with neighborhoods.

“We want to bring together people from different sides of town and build something for the community,” said TRT Director Timothy Jennings-Bey.

Last October, the city put out an official request calling for a better way to not only alert people of crimes nearby, but also help establish better relationships between residents and the city’s police.

“Right now, we have gun clusters, and we have a lot of people who are exposed to gun violence,” Jennings-Bey said. “We need to create a platform so that local residents and young people would feel comfortable in having a conversation about the trauma they experience.”

When Syracuse University professor Adam Peruta heard about this initiative, he quickly sent a proposal and was chosen for the mobile app project. Peruta and his company, Zivics, has four months to design the mobile app. Once it’s launched, the city gets to use it for three months without charge and decide whether to fund the project. The company is looking into grants to receive more funding.

In collaboration with TRT, Peruta organized three community workshops to collect feedback and ideas from locals.

Peruta proposed the app to include an alert system and a feature that encourages positive engagement and involvement within the community. One idea is to create challenges for residents to complete. For example, participation in a neighborhood cleanup or attending community events. He suggested a reward system, where app users can earn points for completing such challenges. To brainstorm more ideas, residents split into teams and came up with their own pitches.

Each team wrote their ideas on large sheets of paper taped to the wall. At the end, attendees placed stickers next to ideas that they liked most.

Deborah Frett, a South Side resident, said the app idea is a quick, efficient way to inform residents when anything happens. Instead of hearing about shootings hours or sometimes days later, Frett thought the app can help people respond and get to safety quickly.

“An app is good because everybody is on their cell phones,” she said. “When that ‘ding’ comes in, they’ll automatically check on their phones to see what it is.”

Frett works at Arc of Onondaga, an organization helping people with disabilities in the community. She also volunteers as a member of Mothers Against Gun Violence. The 52-year-old sees the TRT app as an opportunity to educate families on how to respond to violence. She recommended an event to train kids on how to react when they hear gunshots.

“There are so many shootings nowadays,” Frett said. “The kids don’t know what to do when they hear a shooting. I’m an adult, and I don’t even know what I’d do. They need a safe spot to go to.”

David Hogan, outreach specialist at Syracuse Cure Violence (SNUG), suggested that the neighborhood challenges in the app should coincide with what’s happening in the community. Hogan said that neighborhood apps already exist, but the point is to get people to use, engage and build a community through the app.

“Going forward, I just really want to see it happen,” Hogan said. “I’d like to see it come together and have it serve its purpose.”

The next Community Co-Design Workshop with Trauma Response Team will be held from 5:30 to 7:30 p.m. Thursday, Feb. 28, at the Magnarelli Center, 2308 Grant Blvd.