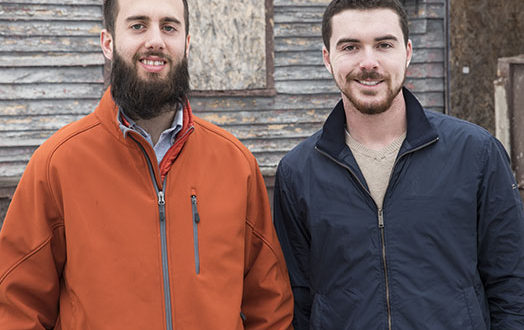 Two community outreach coordinators with the Greater Syracuse Land Bank for the past year, Liam Kirst and Logan Reidsma, have been busy coordinating multiple opportunities for students and adults to paint artwork on the the plywood boards used by the nonprofit to secure vacant houses throughout the city.  Their efforts have resulted in over 200 completed boards thus far.

On May 22, after overriding the mayor’s veto, the Syracuse Common Council voted to eliminate funding for the Land Bank from the City’s 2017-18 budget. In previous years, the city has allocated $1.5 million per year to the nonprofit. One reason for the cuts, according to council members, is the recent fiscal health of the Land Bank. But as the nonprofit explains, last year’s $200,000 deficit will only continue to increase.  Operations were funded by proceeds from property sales, but as quality properties sell and those revenue decline, inventory of blighted houses remain along with increase in maintenance costs.

Art won’t solve this problem, but Kirst and Reidsma hope the project will increase awareness. Below, each reflects on what their work with the project has meant.

While attending Syracuse University, I often looked forward to walking by the Oath of the Athenian City-State, which is etched into the wall of the Maxwell School of Citizenship and Public Affairs. As someone who has lived his entire life in Syracuse, the last sentence of the oath continues to resonate with me today:

“We will transmit this city, not only not less, but greater, better and more beautiful than it was transmitted to us.”

Shortly after beginning our roles as community outreach coordinators at the Greater Syracuse Land Bank, Logan Reidsma and I began working on the Paint the City project. Logan had the idea to reach out to art teachers in the Syracuse City School District; we asked these teachers if they’d be interested in working with their students to paint murals on the plywood that the Land Bank uses to secure many of the vacant properties that it acquires in the city of Syracuse.

Having graduated from the Syracuse City School District myself, I loved the idea. This phase of the project provided students with an opportunity to make a tangible and visible difference in their own neighborhoods. Instead of seeing bare plywood in the windows of vacant houses on the way to school, a child might see his or her own hard work.

To me, this aspect of the project remains the most powerful.

As word began to spread about the project, we received a great deal of interest from many local artists, organizations and community members. As a second phase, we began exchanging boards with groups like 40 Below, a group of young, civic-minded individuals. They worked in conjunction with the Land Bank’s project by organizing a cleanup on the corner of Midland Avenue and Newell Street; the group had local artists paint “boards,” which are now on display in the windows of vacant properties on that corner.

The third phase of the project took place June 3, in the parking lot of the old South Presbyterian Church on South Salina Street. The event served as an opportunity for anyone who was interested to come and paint a board, which will then go on to help brighten up a blighted property. In total, 62 boards were painted Saturday. 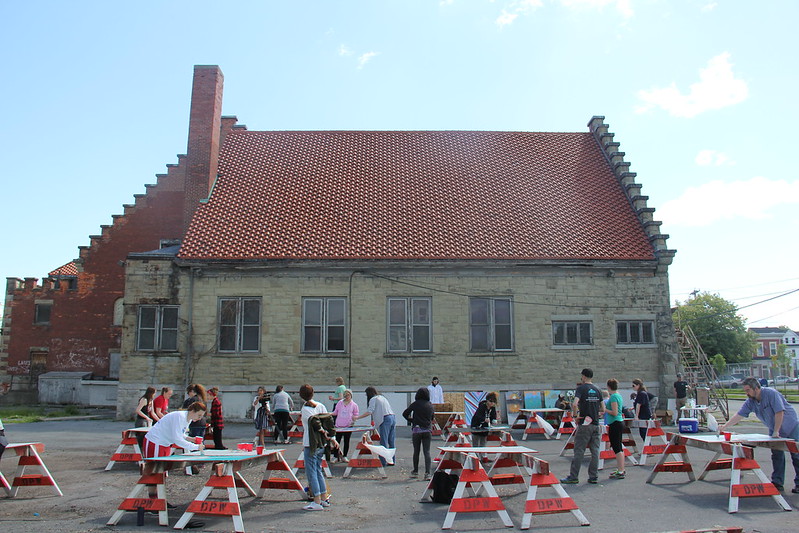 Community members gather June 3 to participate in the Paint the City event. | Photo by Zau Nhkum, The Stand intern and ITC Media senior

What struck me the most about the turnout at the event was the diversity of it; there were people from both the suburbs and the city, young and old, who were simply interested in making a difference. My roommates, neither of whom are from Syracuse, had been looking forward to the event for weeks. Neighbors stopped by and asked about the project, or grabbed a cup of coffee, which was donated by Recess, a local coffee shop. A child who had been walking by stopped to see what was going on; he ended up painting two boards, which could very well pop up in his own neighborhood.

In order to make the event – and the project – possible, we first needed permission from our bosses at the Land Bank. There were plenty of reasons to say no, such as the cost of it, or the fact that it would require me and Logan to be out of the office frequently, as we primed and delivered boards. Instead, the Land Bank leadership and staff have been completely behind the project from day one, allowing us to purchase paint for the city schools that we worked with.

For Saturday’s event, we relied on paint donations – and the community came through in a big way.This project has reminded me of just how many people there are in the area who are interested in “transmitting this city” greater, better and more beautiful than it was transmitted to us. I hope, in some way, this project contributes to that mission.

From the beginning I thought that this project had the ability to engage a variety of age groups and allow them to become involved directly with problem properties in our city. When Liam and I first started our Americorps position, we were looking for a way to educate people about the Land Bank, and this slowly became the vehicle to do that. Mural projects have helped cities combat similar issues with great success, so we figured, why can’t it be applied here in Syracuse.

So far we have utilized 244 pieces of plywood for this project, and 62 were created during our Paint the City event. This is just the beginning. With local groups such as 40 Below, we have the talent here in the city to create new ideas that can lead to events outside the box.

Ultimately, this project is important because it has the ability to inspire people that they can do something to help even though they might not realize it. Art has a special ability to give people a sense of wonder and the power to create. That sense of wonder can lead to innovative creations that drive change. An art event might not fix the problem on the surface. However, it does create a discussion, that any age group can participate in, around an issue that people might otherwise turn a blind eye to. 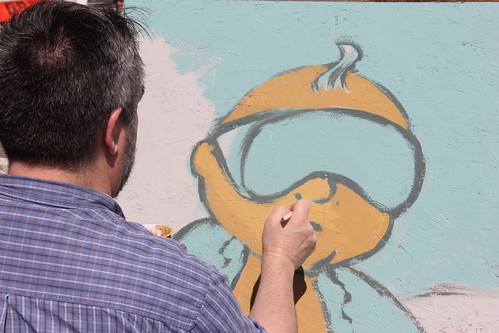