Over the past couple of years, A Friendly Five column has spotlighted many groups, bands, individual musicians and singers. With each story we have tried to share some insights with our readers as to the variety of musical styles and talents in our city.

Occasionally we have told the stories of some of our musical ambassadors who have moved away to pursue careers in other markets. However most of them, if not all, still consider Syracuse home.

Garland Jeffreys, 69, a singer/songwriter from Brooklyn, fits that mold. Well kind of. You see, while Garland is not from Syracuse nor does he consider it his home, he has experienced a few of our winters. Garland began playing music and studying fine arts while at Syracuse University in 1965. 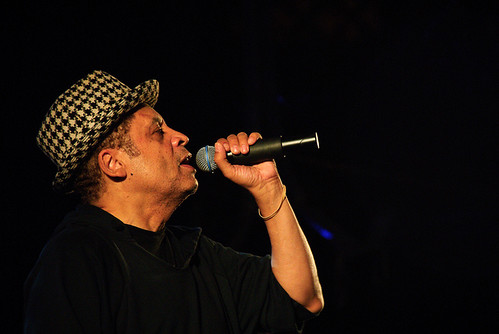 Garland Jeffreys, a veteran of rock ’n’ roll, blues, soul and reggae, returns to Syracuse this month to perform. He first came to Syracuse in 1965 to study fine arts at Syracuse University. | Photo provided

Some of you may remember 1965. It was the year Jim Brown made his debut with the Cleveland Browns (I always wondered if the team was named after him). It was also the year that the Rev. Dr. Martin Luther King Jr. led thousands of marchers from Selma to Montgomery, Ala., in their quest for justice and voting rights. President Lyndon Baines Johnson signed the Voting Rights Act later that same year guaranteeing voting rights for blacks.

Things were changing then. Heavy-weight boxer Cassius Clay even changed his name. Many of you remember him as the young Muhammad Ali who stood victoriously over the floored Floyd Patterson, taunting him, “What’s my name, what’s my name?”

That was 1965, and freedom to be oneself was the political climate of the era. It marked the beginning of the end of the times when some blacks would feel the need to hide behind even the slightest bit of light-colored skin, trying to deny their blackness in order to be accepted.

Garland was coming of age around that time.

﻿﻿“I learned all of the racial names quickly when I was coming up,” he recalled. “People were afraid to be themselves, even within the family because the penalties could be severe.”

Today, though, Garland is proud of his multiracial ethnicity. He is part Puerto Rican, Caucasian and black. He reflects his background in his artistry. He calls himself the “King of In Between,” which is also the title of his latest album.

He shared with me that his influences were jazz, rock, funk, soul and reggae and that some of the artists he loved when he was coming up were the Temptations, Smokey Robinson and Bob Dylan. I guess it’s no coincidence that 1965 was the year the Temptations’ song “My Girl” reached No. 1, and Bob Dylan released his hit, “Like a Rolling Stone.”

The music Garland writes usually has a message. Sometimes he talks about race relations and other times he just talks about being who you are.

“I have sold over one million CDs worldwide,” he said.

His records are released on the Luna Park Records Label. Recently, he did a live performance of his latest CD on the Late Show with David Letterman.

“It was really cool to perform on the show, but being interviewed was nice,” he said.

Insight and knowledge emanated from Garland’s persona as I spoke with him. I got the feeling that Garland had something meaningful to say and that he knew how to articulate his message well. So I asked him if he would share some things with us. I was particularly interested in hearing about how bands and musicians could persevere in this business.

“There needs to be a goal,” he explained. “Bands have to take a harmonious approach to what they’re trying to accomplish. There has to be some commitment and stick-to-it-ive-ness. Once the product is made, you have to work on it and improve it.”

Garland will bring his product to The Palace Theatre this month. The band Grupo Pagan will be his opening act. The band performs Latin-flavored songs and will showcase a few new originals at the show from their upcoming CD. Edgar Pagan from Grupo said that it was an honor to be asked to open.

“Garland is a legend,” Pagan said. “His music is interesting because it is very political.”

Have A Friendly Five suggestion? Contact Reggie at reggie@softspokenband.com
or (315) 479-9620