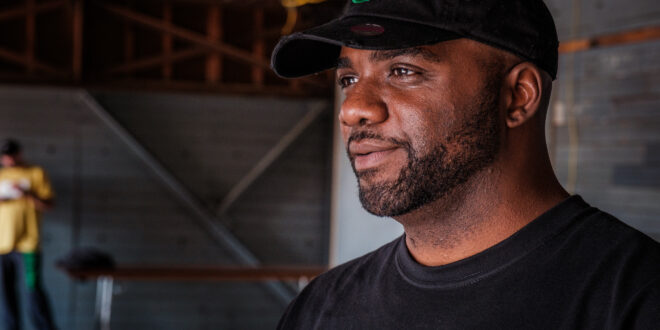 Mike Golden plans to open a cannabis consumption lounge in downtown Syracuse once legal. He organized a “Stop The Stigma Cannabis Rally" to help expand understanding on the issue. | LaTrenda Carswell, The Stand

The legalization of the recreational consumption of marijuana in New York, approved earlier this year, may be a gateway for the economic empowerment of Black entrepreneurs in Syracuse, according to advocates and business leaders. For Black-owned businesses to get there, some members of the cannabis business community say, the stigma surrounding cannabis must first be wiped away.

Earlier this spring, communities across New York saw the strict ban on recreational cannabis consumption crumble when state officials signed legislation regulating safe marijuana usage for New Yorkers over the age of 21, as well as its promising commercial opportunities. The bill, known as the Marijuana Regulation and Taxation Act (MRTA), also includes provisions that would create social and economic equity programs to encourage small businesses and communities disproportionately harmed by draconian drug enforcement to participate in the cannabis industry.

For business owner Mike Golden, who co-founded the cleverly named business and brand The Higher Calling (THC) with his longtime friend Byron Cage, the legalization of recreational marijuana signified a wake-up call for Black business owners.

“I feel like more than ever, at least in this state, it is an opportunity not only for economic development but economic empowerment. Black business owners don’t own a lot of space in any type of industry as a culture,” Golden said, adding that legalization presents an opportunity for Black entrepreneurs to make significant inroads in a new market.

THC currently works on campaigns to erase the stigma cannabis has in social settings, as well as conversations about race and social class. The group also sells cannabis culture apparel that alludes to cannabis culture and in some cases lampoons other brands, like its New York Joints hat, which parodies the New York Jets football team. THC’s ultimate goal is to be able to open a cannabis consumption lounge, setting its sights on a location in Armory Square.

“We think it would be a good addition to the area, especially because you can’t have cannabis and alcohol in the same establishment, so having our space close by to other spots where people can go get a drink without having to drive would be ideal,” Golden said.

Golden, who works as a real estate agent in Syracuse, added a lounge at Armory Square would also increase representation for Black business owners in the downtown area.

“We want to be downtown because, on a social equity level, I find that Black people seem locked out of downtown,” he said. “I know a lot of people who have tried to open establishments downtown, and they always seem to run into something.”

As Golden and his team continue to finalize details on the potential location for the lounge, their advocacy for safe cannabis consumption and more opportunities for “canna businesses” has not wavered. They hosted a “Stop The Stigma Cannabis Rally” Oct. 2, bringing together other cannabis or hemp-based businesses to Syracuse’s Inner Harbor. The concept for the gathering came to Golden as he dug deep into business education in anticipation for the launch of his cannabis consumption lounge.

“When I was on a Zoom call with 80 people in the cannabis industry in New York, there was no one who looked like me,” he said. “It made me realize that I have not heard about anything related to the cannabis industry from local economic development groups. Those people aren’t really talking about cannabis from an economic development or entrepreneurial standpoint, or even from a jobs perspective.”

The rally, Golden said, was meant to bring people together to a safe space to learn about cannabis culture.

“I think legalization is definitely a game changer for those who have the aptitude to understand the components that are part of the commercialization process,” Odom said.

Odom spoke about the legacy and disproportionate impact that the criminalization of cannabis consumption and possession have had for underprivileged communities. In the seven months prior to the legalization of marijuana in New York, Syracuse Police Department officers handed out nearly 1,000 tickets for marijuana possession, according to a report published on Syracuse.com. Furthermore, nearly 90% of those violations were attributed to Black individuals, the report states.

In a larger metropolitan area like New York, 93% of all marijuana arrests in 2020 were conducted on Black and Hispanic individuals, according to a report from the Legal Aid Society of New York.

“I don’t know if the history that came with (the criminalization of cannabis) will ever be left behind; it will always be recanted and spoken about,” Odom said. “But I think for those who have the entrepreneur spirit … for those who see this as an opportunity to turn this around and capitalize on it, this is a game changer.”

The MRTA also included a six-month timeline for the state’s Office of Cannabis Management to establish the legal and financial frameworks that would govern cannabis production, sale and consumption. That timeline has now elapsed and regulations have not been issued, leaving local business owners who have been planning for months to launch to remain on stand-by. For Syracuse Hemporium owner James Charon, the crawling pace at which the state is establishing regulations has given him more time to establish his business in the greater Syracuse area. His store, located in Mattydale, currently focuses on hemp and CBD products.

“I am pretty much ready,” Charon said. “I am just waiting for licensing and product.”

The current regulatory “grey area” businesses find themselves in, Charon said, is just one obstacle in a path toward a successful cannabis-centered enterprise. Having municipalities opt into the sale of recreational cannabis is another.

“You cannot make a decision based on poor education,” Charon added. “Nobody can teach these communities the law. They have to read it, and they have to understand it. But they have to have the right perspective. If they just hear about the negative implications of cannabis, then they will not know what the laws actually entail.”

Municipalities across Onondaga County have shown hesitancy when opting into the legal sale of marijuana. The villages of Minoa, Fayetteville, Liverpool and Cazenovia, and the towns of Manlius, Camillus and Geddes, have all either attempted to opt out of cannabis sales or submit the issue to a referendum for residents to decide.

“I’d like to see more surrounding towns opt in,” Golden said. “I think they will once they see how well it does from a revenue and tax standpoint, which goes back to the community, too.”

For others, financial education and literacy are also important as more Black entrepreneurs start to look into the cannabis industry.

“Those are not things that you are necessarily taught in school,” said Haniyah Philogene, a Syracuse University student who attended Saturday’s rally. “That type of entrepreneurship is not even encouraged.”

“I mean that as far as having resources available and having technical assistance available for entrepreneurs,” she said. “All of those components have to be laid out and simplified so people can come in and know what they have to do to have a successful business.”

“Some people may not take the opportunity to change their family dynamics for generations to come because they are scared of the process,” Odom concluded.

For residents interested in learning more about the cannabis industry in the Empire State, Advance Media New York is hosting a state-wide “Cannabis Insider” conference Oct. 28, set to gather industry experts from across the country. The event, part of a series of conferences hosted by the national media company, promises to provide critical information on how to start a cannabis business.

The New York Cannabis Growers and Producers Association (NYCGPA) — an industry trade association representing cannabis growers, processors and retailers — is also hosting a virtual social equity town hall Oct. 6. The event will gather legal experts and industry insiders to discuss the social and economic justice legislation they would like to see regarding cannabis entrepreneurship in localities across the state.