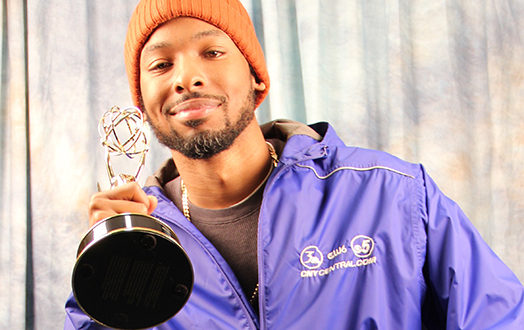 South Side native uses his storytelling talent to inspire the community

Growing up on the South Side near Midland Avenue, Quindell Williams developed a unique relationship with many in the community, which allowed him to understand the broader image of the stories he covers. Depending on the individuals involved and the type of stories he covers, whether it be crime or education, he has an in-depth relationship with the South Side residents.

“I draw a different connection in the community because I grew up here. When shooting in the field, sometimes it’s just a story … but for me, sometimes the people involved may be family or someone I grew up (with),” Williams said. 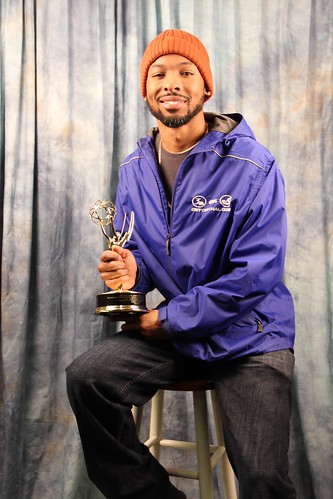 Williams, 31, is highly recognized among his family, friends and former colleagues for his humble personality and strong work ethic. He recently won an Emmy for his coverage of the Dr. Robert Neulander trial, along with his team members: Matt Mulcahy (anchor), Sarahbeth Ackerman and Alex Dunbar (reporters), Rae Fulkerson (news director), Megan Coleman (anchor) and Amelia Couch (producer). Neulander was found guilty of murdering his wife, who died in 2012. Williams and his team at CNY Central covered the trial in April 2015.

Williams was born in Syracuse to Corre Williams and Desiree Odom. His father signed him up to play football at Kirk Park at the age of 6, in order to keep him physically active. He was guided by former coach Bryan Preaster for almost eight years. Preaster said he doesn’t like to say any kid is a good kid but if he had to, it would be “Q.”

“He was the kind of young person you admired because he was so young and focused,” Preaster said. “More young people can accomplish their dreams, if they are more focused.”

Tiffany Henderson said she has known Williams for almost 20 years, and he serves as a mentor and godfather to her eldest son, Zacari. They attended T. Aaron Levy Middle School and graduated from William Nottingham High School in 2003. She became emotional talking about the influence he has on her son’s life and her friendship with him.

“I’m just happy I was able to be a part of seeing him (Williams) grow up from a young man to a grown man and to see him grow into his fatherhood, husbandhood and his career,” Henderson said. “Nowadays it’s hard for an African-American man to balance different hats. It’s good to see men like that in the community but also across the world.”

He played football in high school and went on to study political science at Wagner College on Staten Island, with hopes to be the first black president of the United States. After realizing that was not the career for him, he transferred to Onondaga Community College, eventually studying electronic media communications. Williams said he wanted to be the male equivalent of Oprah Winfrey and build his media empire.

Under the leadership of professor Mark Ballard, Williams was eager to go to class every day, learning “something different, fresh and exciting” about television and broadcasting. He worked with Ballard on local sporting events for ESPN, assisting with production and crew setup — something he occasionally still does today.

“I’ve been teaching for 16 years and 10 to 15 percent of the kids that come into my class come with a work ethic already,” Ballard said. “Quindell was one of them, and I’m glad he’s finally being praised for it.”

Williams transferred to Oswego and graduated in 2011 with a bachelor of arts in broadcasting and mass communications.

“I thought this was a hobby. I didn’t think this would turn out to be a career,” Williams said, wearing his New York fitted cap and CNY Central royal blue polo shirt.

Although he won the Emmy last March, the conversation was recently sparked by his proud father, Corre, who posted a picture of the award on his Facebook page.

“I was proud of him and his accomplishment,” Corre said. “I knew he was always going to do what he wanted to do because I always taught him discipline and execution.”

Williams’ wife,  Jamira, said she placed the award on the dresser because he was too modest. “I often tell him it’s OK to celebrate your accomplishments; you earned them,” Jamira said. They initially met as classmates at Nottingham High

Henderson sang “My Funny Valentine” at the Williams’ wedding almost two years ago. Williams had heard her sing that exact song during an Afro-Academic, Cultural, Technological and Scientific Olympics competition at Nottingham. He told her then that the song would be sung at his wedding, if he ever got married.

Now, Williams and his wife have 1-year-old Jasai, a name Jamira said came to her in a dream. Williams said he does a good job of balancing work and family considering some of the stories he covers hit close to home.

He said he had to recuse himself from the Father’s Day shooting coverage last summer because he knew many people who lived in the area. As well, the story earlier this summer of Baby Maddox, a toddler who was murdered by her father, was also difficult for Williams considering he has a son. He said it can be draining covering a story and hoping for a positive outcome.

“Stories like these are tough because I have a child, and all I think about is him,” he said. “It’s hard being a father now and having to visually tell a story to others with young children.”

Williams continues to use his personal connection to the community and its neighbors to break down the walls of distrust that some journalists face when conducting stories. He said he covers stories that matter, allowing people to show both sides: the good and the bad. He also said he wants to begin mentoring young men the way he was mentored growing up.

“I’m sure he’s not done yet; we’re just beginning to see what he can do,” Preaster said. “The best is yet to come.”