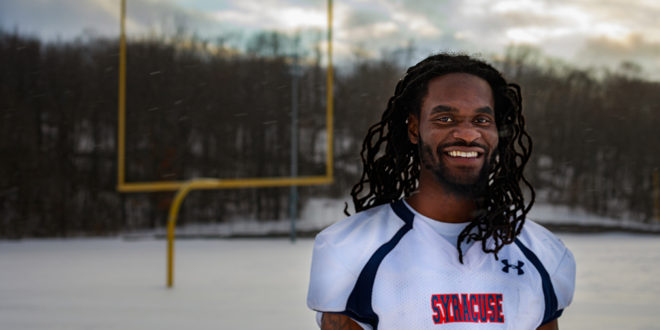 T he Syracuse Strong won a national championship in January when they beat the Virginia Titans in the Sunshine Bowl in Fort Lauderdale, Florida. The Strong dominated the game 32-0.

“We went out with 27 guys kind of nervous, but everyone stepped up and got the job done,” Head Coach Ed Watkins said. “It was my first national championship with this team and that was great.”

Wide Receiver LaQuan Rouse was declared MVP of the game after scoring two touchdowns. Hear from him on the big win directly in a special Q&A conducted by The Stand’s reporter Mike Zawisza.

Q: First of all, congrats on the big win.
A: Thank you man, thank you. I appreciate it.

Q: So, how was Florida?
A: Florida was great. I love it down there. Weather was beautiful.

Q: I bet. I know you were down there for business, but did you get a chance to relax?
A: Well yeah. Some of the guys left right away, but a few of us stayed around. It was great man. I was born and raised in Syracuse so it was a different feeling down there.

Q: How did you find your way to the Syracuse Strong?
A: I played football in high school, and I was pretty skilled. My family was always telling me to stick with it. Then I graduated, had a daughter and I had to play that role of being a father. So, I got a job at Costco. I worked construction, too. I worked a bunch of things like that. I got to a point where I felt like I was comfortable. I tried out for a team called the Ithaca Warriors. A couple years later, some friends convinced me to come back home to play here and I did.

Q: Was it hard transitioning back to the game?
A: I guess, but you know I wanted to step up and be a father. I never had a dad when I was growing up. So I put the game aside and took responsibility. I wanted to be the father that mine never was.

Q: Congrats. Ringing in her first year with a big trophy, huh?
A: (laughs) My oldest [daughter] is really excited. She keeps showing off the picture of me holding the trophy, saying, “Look at daddy!”

Q: Does something like that motivate you?
A: Yeah for sure. I try to be the best role model for them. She’s always supporting me from the stands. My nephews too.

Q: There’s this stereotype about wide receivers, how they’re always divas and they want the ball all the time, but you seem so humble. Is there any diva in you?
A: Nah, I mean I want the ball, don’t get me wrong. But I’ve got teammates, you know? Other wide receivers can be playing well, or the running game can get into a rhythm and I kind of just step back and wait for my time. Like in the championship, I only had two catches. Two catches and two touchdowns. I knew my time was going to come, and I made the plays. That’s what it’s about.

Q: Two catches, two touchdowns, and the MVP. That’s pretty clutch, man.
A: When the coach calls your number, you do what you do. That’s what I tell myself during the game.

Q: Come on, you’re not hoping to be picked by a scout?
A: I mean, yeah that’d be dope. I’ll keep playing and seeing where this takes me. I know I have the skill and some tools. But I do it for the love of the game, … (pauses) But I wouldn’t be against being seen by a scout (laughs).

Q: Offseason plans?
A: Stay in shape, watch what I eat. We’ve got a real short offseason — we start right back up this month, so I got to be ready. You can always get better, bigger, faster, stronger.

Q: Family, workouts, practice, work. How do you find time?
A: I do the best I can. I’m working at Loretto now — it’s like a nursing home — and they’re flexible with me. I just got a lot of people on my side. I’m thankful for my aunts, family and friends. They saw this talent and skill in me in high school and they encouraged me. I try to keep good people around me. I do the best that I can, like I said.