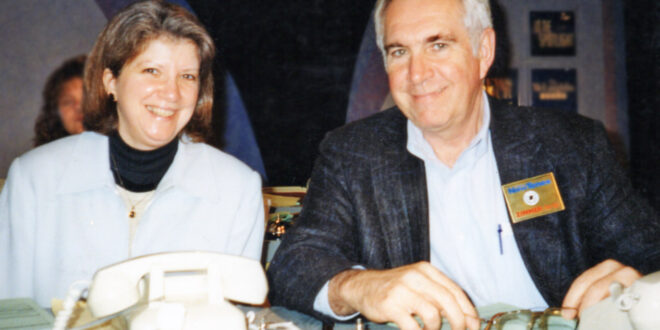 Art Zimmer recalls when he worked 70 hours a week to build 13 multi-million dollar businesses. Upon retirement, he found himself working 70 hours a week, but as a volunteer for non-profits in the community, most of which are now closed due to the novel coronavirus.

Now 82, what is Art Zimmer doing? He tells The Stand’s Columnist Walt Shepperd: Nothing! Just like everybody else.

But he is also promoting a new book, “I Did It My Way.” An oversized edition that promises to bring an odyssey to the author’s life. That life was begun and developed in Hamilton, NY, where he has moved to recreate a hometown version. In between, he’s had recognition as an Eagle Scout in high school, to the Press Wall of Distinction. In his own way, Art Zimmer has done it his own way.

THE STAND: The name of your new book is “I Did It My Way.” Where does the phraseology come from, and what is your way?

ART: Well, I kind of played off of the Frank Sinatra song a bit. Basically, going through life, I did things differently from most people. What most people would call doing it my way. But, it varied greatly from business to business. There’s no set answer to what is my way. It’s just how each thing comes up for each business, and what I decide is the right way to go. Much like Frank Sinatra did with his song “My Way.” Another thing that was my way, and my say, was hiring good people that knew what they were doing. One of them being you Walt Shepperd. Some of your contemporaries when I bought the New Times, I kept Mike Greenstein on, and you, and some of the others. That is part of what “my way” was; to surround myself with good people who knew the things that I did not know.

THE STAND: You’re first book that came out, “Making it Count: From A to Z The Life and Times of Art Zimmer.” What makes it count?

ART: Well, similar to “I Did It My Way,” is that the things that I did, really counted, they really had an impact, with an awful lot of time, money and energy spent on helping non-profit communities. At one time or another over 50 years, I was involved in almost every non-profit effort in the Syracuse area. And I was instrumental in the creation of quite a few that are still, well up until the pandemic, very active and doing great and wonderful things.

THE STAND: Why did you sell the Syracuse New Times?

ART: Well, it was a variety of reasons. I was approaching 75. Most of my contemporaries were retired, and I was still working 70 hours a week. I had run the Syracuse New Times for 26 years, and it was time to change gears a little bit. I felt that I had accomplished just about everything that I could, through and with the Syracuse New Times. Building it from a small bankrupt rag sheet to the one of the largest and most popular media in Upstate New York. Winning all kinds of national, state and local awards for journalistic excellence. Of which, you Walt Shepperd, were a major contributor, thank you very much. You were a two-time winner of the New York State Writer of the Year Award, the only person to have ever accomplished that. It was kinda time to move on.

THE STAND: You had mentioned several people being crucial in the development of South Side media, Ken Jackson, Hugo Acosta and Harriet McDowell. What do those people bring that’s crucial to business development in a community like the South Side.

ART: Well, both Hugo & his Latino newspaper, which was primarily a South Side newspaper, and Ken Jackson with his very specific Black newspaper, which was very much South Side. A lot of my advice to them, and I spent a lot of time with them to give them some help, was to emphasize community involvement. Involved in the community, non-profits and things that were good for the community. And Harriet McDowell was the same way. Another one I was very involved with was the Community Health Center on the South Side, which is still in operation, which I and the Syracuse New Times, well the New Times and I were one and the same, was very involved with, specifically in finding funding for them, to carry out its mission of providing healthcare services in the South Side community.

THE STAND: What must they and others that would take leadership positions avoid?

ART: Well one of the things, I never put making money and making a profit first. I always put serving the community first. And that then created the success that made money. And so a lot of people think that well if I just concentrate on making money and the heck with the community. They are not going to succeed.

ART: Well before I retired, the 70-hour work weeks were frequently the short weeks, some of the weeks were a lot more. My wife Shirley and I worked side by side for 25 years at the New Times. She would put 70 to 80 hours a week also, because we had to make it work and make it successful in order to provide jobs for a lot of people. We employed 80, about 30 regular full-time and about 50 regular part-time employees. I felt an obligation that this venture with the New Times work, because we were supplying a livelihood for a lot of people for who otherwise might not have been able to get a good job. In doing the 70 hours per week with all of the other non-profits that I got involved with after I retired, that was all community service to help all the non-profits do well, make money and survive.

THE STAND: What is the role of an alternative news weekly?

ART: Well, exactly as the word says, alternative. In Syracuse all of the major media was owned by one person, Newhouse. Newhouse owned the morning paper, the evening paper, the Sunday paper, the biggest radio station, the biggest TV station, the biggest billboards, the cable network and so on. They controlled all the media basically in the Syracuse/Onondaga community. So, to have an alternative voice that was willing to put a different perspective on things. Just to give a little example, Lee Alexander, who was a terrible crook and the worst mayor Syracuse ever had, these daily newspapers kowtowed to him and didn’t get him out of office as they should have, probably years earlier. The New Times would point these things out as well as (the mainstream media’s) short-comings. And it had an impact, not as much as I would have liked, but we were the mouse and they were the elephant. But we did have a lot of impact, and we gave a tremendous amount of help and publicity to the non-profits that the daily newspapers were not doing. And also to theater and live music. In the earlier days, the daily newspapers totally ignored entertainment and live music. It was only after the New Times got heavily involved, that they got on board to not be so embarrassed by us showing them up all the time.

THE STAND: Have I left anything out?

ART: In 82 years, a lot of things happened. I’ve had three books written on my life, the latest one being almost 400 pages. So, yes, we have left an awful lot out, but unless you’re willing to sit here for the next six hours, we probably did a pretty good job of covering the essence of things at this point.

THE STAND: Thank you. It’s been a pleasure.

ART: Well Walt Shepperd, I thank you very much for your years of dedicated service to the Syracuse and Onondaga County community.