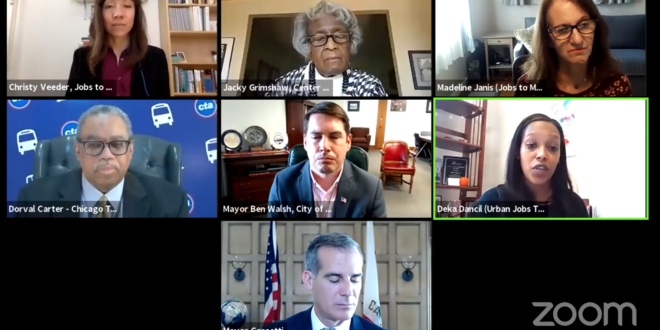 Syracuse Mayor Ben Walsh and Urban Jobs Task Force (UJTF) President Deka Dancil were joined today with six other leaders from across the nation to discuss the recently released Jobs to Move America report pushing the Biden Administration to overturn the ban on local hiring for federal projects.

In a letter to President Joe Biden, Jobs to Move American, along with more than 150 local officials, organizations and academics, demanded the administration to support local hiring after a report on the Local Labor Hiring Pilot Program revealed local hiring increases opportunities for marginalized workers and provides pathways for residents to be part of infrastructure projects in their own communities. Walsh believes this report comes at a pivotal time for Syracuse as the city will soon embark on a significant federally-funded infrastructure project: the I-81 viaduct replacement project.

Findings from the pilot program showed local hiring didn’t affect the community in a negative manner or have an impact on competitive bidding on construction projects. During the Obama administration, the experiment encouraged (without requiring) the hiring of local, skilled workers on federally funded projects. In 2017, The Trump administration quashed the program.

“We look forward to the re-institution of a local hiring program that will put local people in the city of Syracuse to work and in cities all across the country,” Walsh said.

Walsh and Dancil shared the history of I-81 and the effects it has had on the Black and brown working class community here in Syracuse, as well as UJTF’s findings in its Racial Equity Impact statement.

“If the I-81 viaduct project, or any other infrastructure project that had federal dollars tied to it were to start tomorrow, very few Syracuse residents will be able to work on it,” Dancil said. “And we’re the 18th poorest city in the nation.”

With the federal restrictions on local hiring for federal projects in place, the Walsh administration worked to create a “big table” comprised of relevant stakeholders to find innovative ways to work around that restriction.

“If the ban on local hiring weren’t in place, we’d have no need for such extreme and really, nearly impossible measures,” Dancil said. “It’s time we use these projects also as vehicles to correct the racial, environmental and economic injustices that they cause upon their initial build.”

Dancil expressed that with the removal of the federal ban on local hire, the nation can create concrete pathways out of poverty for struggling individuals and strengthen local economies in a way that hasn’t been seen before on a large scale.

“The call for justice has been knocking at the door quite a bit in the past year,” Dancil said, “And this is just one way for our new (presidential) administration to answer.”