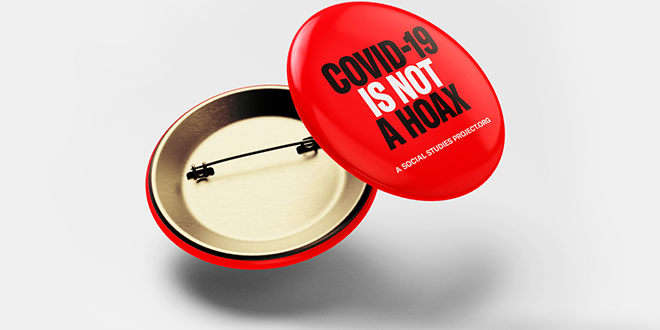 Nearly six months into the “Resist COVID Take 6!” campaign, artist Carrie Mae Weems has put everything in her life on hold to focus on outreach in communities disproportionately affected by the pandemic.

The campaign’s goal is to highlight how Black and brown communities are at a disadvantage when it comes to COVID-19. Weems started outreach in the Syracuse community when the pandemic first began. Since launching, the campaign has spread nationally to other cities with large minority populations.

“It’s taken on a life of its own. I think, because it speaks so profoundly and creatively, to the moment,” Weems said. “It has really beautiful imagery.”

Weems said the project is about saving lives and alerting communities that the pandemic is not a hoax. Since her campaign is artist-driven, she said she doesn’t have to go through a bureaucracy that tells her what language to use or when to do something.

Weems had no intention of spending the last six months working on a campaign about COVID-19 but said there’s a new demand every day for cities that want to get involved. COVID-19 exposed the levels and depths of the tragedies Black and brown people face in America, she says, and the ways race has played a role in the way people of color have coexisted in this country.

Some of Weems’ imagery for the campaign has included billboards and posters featuring people of color with slogans such as, “Don’t Worry, We’ll Hold Hands Again” and “A Little Distance Goes a Long Way.” The campaign is being supported by Syracuse University, where Weems serves as the university’s first artist in residence.

Here in Syracuse, July 9 was declared “Carrie Mae Weems Resist COVID Take 6! Day” by Mayor Ben Walsh. He said the timing couldn’t be better for such a campaign.

“What we’ve been saying and will continue to say … ‘now is not the time to let our guard down,’” Walsh said. “We have to double down on the practices that have helped us get to this point in recovery. That’s a big part of this, taking care of each other.”

Weems launched “Resist COVID Take 6!” in collaboration with her friend Pierre Loving. The effort includes six steps to prevent the spread of the virus through communities. On the campaign’s website, people can take a “COVID-19” oath to their community and pledge to personally do what they can to prevent deaths related to the virus. There are also flyers available to print as well as shareable gifs for social media.

In another effort to push back against bureaucracy and President Donald Trump’s administration, Weems contributed to a campaign called “Enough of Trump,” encouraging people to vote in the upcoming presidential election. She said there’s a direct link between that campaign and what she’s doing with “Resist COVID Take 6!” because the pandemic “didn’t have to be this way.”

“It’s really essential,” Weems said, “that we get him out of office, and get somebody in office who has a level of compassion, a level of decency, who does not lie at every turn, who believes in the truth, and who allows for our journalists and our storytellers, to do their job.”

Breu is an Arts Journalism graduate student at the Newhouse School