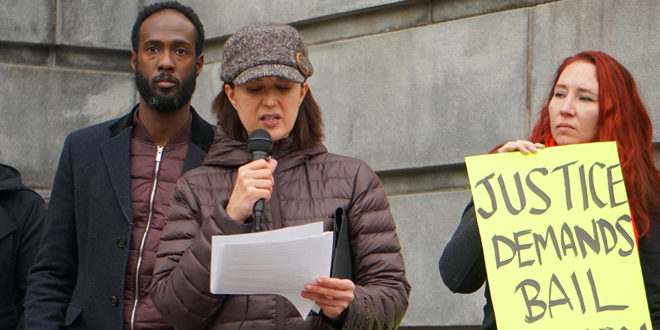 A resolution asking the state to rollback New York State’s latest bail reform passed the Onondaga County Legislature on Feb. 4, despite criticism from local protesters in front of the building.

The resolution, proposed by GOP Legislator David Knapp, will be sent to the state legislature to push forward an attempt at amending or suspending the controversial bail reforms. The reforms that took effect Jan. 1 removed a judge’s ability to impose cash bail for a non-violent felony or misdemeanor and shortened the amount of time a prosecutor has to handover evidence to a defense team for discovery. Knapp’s proposed rollback urges lawmakers to allow judges to use discretion for setting bail in non-violent cases and extends the period of discovery from 15 to 45 days, the same period of time the defense has to file a motion for the defendant. The rollback was co-sponsored by three other GOP lawmakers and had no support from democrats in the legislature.

“This is an absolute waste of time by this legislature,” said Donald Kelly, a defense attorney working in Onondaga County.

Kelly was among the 25 protesters and representatives from local chapters of the National Association for the Advancement of Colored People (NAACP), New York Civil Liberties Union (NYCLU) and the Center for Community Alternatives (CCA) to gather at noon with signs in front of the legislature.

According to Kelly Gonzalez, deputy director at CCA, Onondaga County’s jail population has shrunk by 20 percent since bail reforms were instituted 35 days ago.

“Putting someone in jail for even two or three days (on bail) increases the likelihood of re-arrest after being released,” Gonzalez said while speaking to the crowd. “Continuing to fill our jails like we have done in Onondaga County wastes taxpayer resources and does nothing to affect the root drivers of harm.”

Gonzalez also alleged that the county spends more on jail than it allots to education, healthcare or economic development. She urged lawmakers to re-prioritize what they spend taxpayer money on.

The District Attorney’s Office of Onondaga County has expressed support for the rollbacks citing the dangers of letting potentially violent criminals go free if the judge is not able to impose bail on those deemed a threat to the community. Local judges have also spoken out, expressing concerns with lawmakers “usurping judges’ discretion,” and that fewer defendants will show up for their court dates.

In an interview with The Stand, Yusuf Abdul-Qadir, director of the NYCLU, said it was dishonest to characterize the reform as leading to an increase in crime, since judges are no longer allowed to detain certain defendants through bail.

“How do you objectively determine who’s dangerous? When judges have that discretion, they determine that Black and brown people are more dangerous than white people,” Abdul-Qadir said.

The bail reform places New York on a short list, alongside New Jersey and California, of state legislatures that have worked to remove cash bail. New Jersey has not had an issue with defendants missing court dates or an abnormal rise in crime, since its passage in 2014. However, the effects of New York’s bail reform, and subsequent opposing legislation, is yet to be seen.