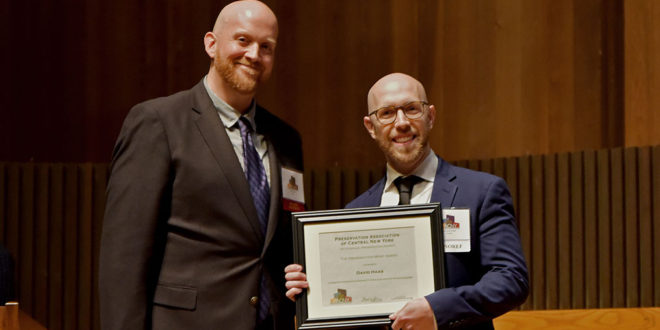 David Hass accepts his award from Grant Johnson, president of the board of directors of The Preservation Association of Central New York . | Lisa Hackley, Staff Photographer

The Preservation Association of Central New York (PACNY) honored a select group of people and organizations, including The Stand, for their passion to safeguard regional landmarks. The annual awards ceremony was held Wednesday, Oct. 23, at May Memorial Unitarian Universalist Society at 3800 E. Genesee St. in Syracuse.

To welcome guests, The Rev. Jennifer “Jo” VonRue offered attendees insight into the history of the Unitarian and Universalist religion, the May Memorial congregation and their theology of love and inclusion. The namesake of May Memorial, Samuel Joseph May, was a reverend and abolitionist whose assistance in rescuing escaped slave William “Jerry” Henry is memorialized in a monument in downtown Syracuse.

May Memorial served as a fitting venue for the preservation awards ceremony. Grant Johnson, president of the board of directors of PACNY, pointed out that the striking building, constructed in 1964 by architect Pietro Belluschi, is now eligible for listing in the National Register of Historic Places. Belluschi was Dean of the School of Architecture and Planning at Massachusetts Institute of Technology, achieved international acclaim for his work and was awarded the American Institute of Architects gold medal in 1972 and the National Medal of Arts in 1991.

Prior to award announcements, PACNY Advocacy Committee chair, John Auwaerter, introduced the audience to the “Eight That Can’t Wait,” a listing of threatened properties in the Central New York region published by PACNY. This listing, relaunched last year, can be found on its website, and includes the Oneida Community Mansion in Madison County and Temple Concord in Onondaga County among others.

Overseeing the ceremony with a graciousness tempered with amiable wit, Johnson set the celebratory tone of the evening by jokingly asking the crowd “OK, who wants an award?” Introducing each of the eight award winners by highlighting their preservation work, Johnson also detailed the reasons they were being honored. Recipients ranged from organizations like the Seward House Museum, to developers, to businesses like Willow Rock Brewing Co., and individuals like Cleota Reed.

Johnson singled out The Stand for its work in bringing news stories specific to the South Side to a wider audience, prior to introducing an honoree for his work with this project.

“The Stand is a very unique local publication in this day that print media is going away seemingly every day,” Johnson said. “It’s great that there’s still a capable local outlet that is doing work like this to raise awareness of the local resources in New York and within Syracuse.”

Syracuse resident David Haas was awarded one of two preservation merit awards by PACNY. Haas was recognized for his work in bringing recognition to the historic architecture of Syracuse’s South Side through a walking tour of the area as part of The Stand’s 10th Anniversary Photo Walk.

“Thanks to Ashely Kang and The Stand for asking me to be part of the Photo Walk. A lot of people talk poorly about our area, and I’m trying to change the conversations on the page,” Haas said after accepting his award. “And the Photo Walk allowed us to actually get out and show people the buildings, talk to the people and change that. It was a great opportunity, and I hope we continue it.”

Haas is widely known for his Instagram, @SyracuseHistory, which pairs photos of historic structures with the stories of the people who lived there. His work brings awareness to the unique history and built environment of Syracuse. With almost 20,000 followers, his stories are connecting with a wide audience.

“When I first saw the Syracuse History Instagram, I thought ‘wow, that was my idea!’” joked Johnson after presenting Haas his award. “But David does a much better job. As someone who is not from a preservation background … he actually talks about the people that live there. I mean, imagine that … people live in buildings!”

Johnson closed the ceremony by announcing that the 2020 Statewide Preservation Conference would be hosted in Syracuse in March, with PACNY as co-sponsor of the event. He also encouraged all in attendance to become members of PACNY, as new membership levels have been added on the PACNY website. An informal reception for honorees and guests followed.

LEARN MORE About David Haas in NOVEMBER’S upcoming print issue, which will feature a PROFILE on the man behind @SYRACUSEHISTORY