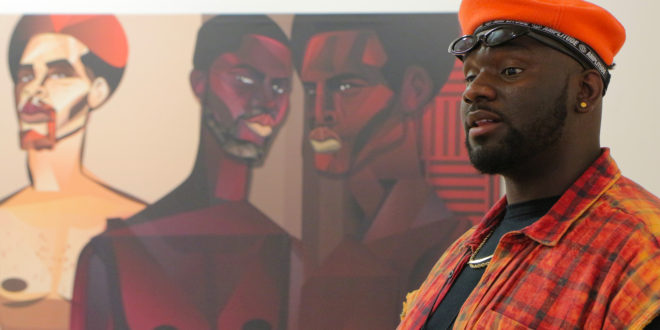 A proud community applauded a host’s introduction to Jaleel Campbell as he premiered his exhibition “Feel That Funk” at the Community Folk Art Center on Thursday night. Campbell, a Syracuse native, also called on staff members of the CFAC to help unveil the central mural of the exhibition, “Ladies Night.”

Like all of Campbell’s exhibition work, “Ladies Night” was digitally drawn through Adobe Illustrator and Photoshop. It shows four black women surrounding another black woman on a throne, appearing to be royalty. The characters in the piece represent some of the most influential women in his life, such as his mother, who he cited as his strongest influence. 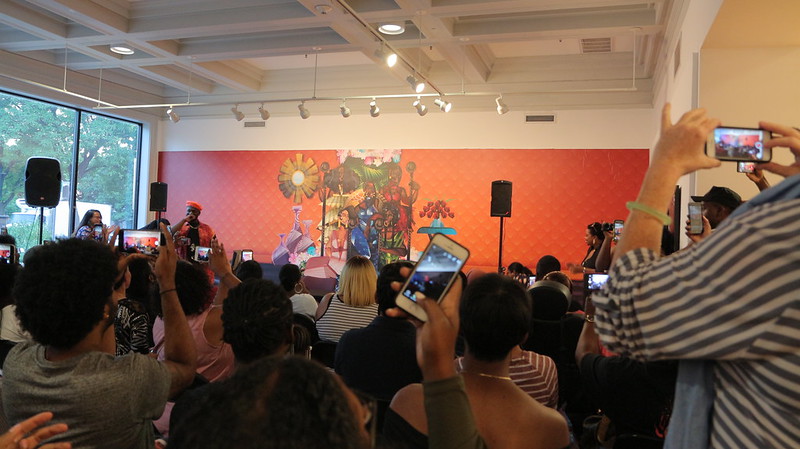 “When I think of my mother, I think of strength,” he said. “I think of women who can’t be broken. The people in my images, I never capture them smiling. It’s a very intense look, and stoic. You can see the power in that pride.”

Campbell was first introduced to digital art when he was an incoming senior at Nottingham High School. He attended an art program at Syracuse University for high school students, where he was taught the basics of his preferred medium.

“I fell in love with Adobe Illustrator. At that time, I was starting out, so my work was crude. But you can see the potential,” he said. He went on to study at Cazenovia College, where he said his professors instilled the principles he needed to grow his work.

He’s served as the marketing specialist at CFAC for the past two years, and he also founded the Collective Display art show. This effort brings in local artists to create exhibitions focused on Central New York culture, according to Campbell’s website. His work has also been shown at the Redhouse Arts Center and the Everson Museum. “Feel That Funk” is his first solo exhibition.

“Looking at the work made me feel proud to be black,” said Sequoia Kemp, a friend of Campbell and one of the women represented in the mural. “As someone who doesn’t often see myself in mass media and in art, it’s nice to see people making art about black people for black people.”

Campbell curated his own work and decided on the arrangement for his pieces. As onlookers step in, the first sight is “Mount Blackmore” on a white wall by itself. The piece stands out from the rest of his exhibition too: it takes on a horizontal composition rather than vertical, and presents a line of black people staring directly at the viewer. 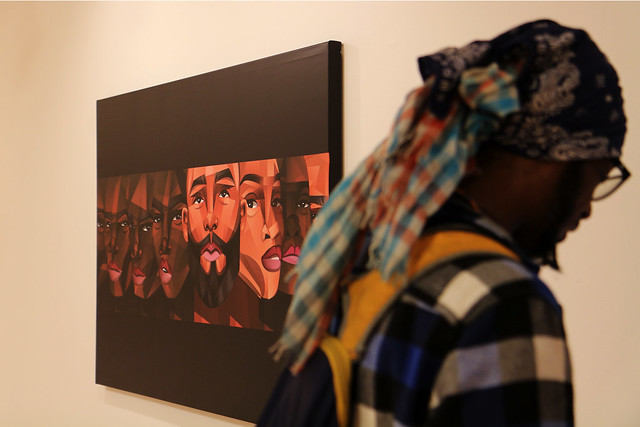 Artist Jaleel Campbell’s piece “Mount Blackmore” welcomes visotrs upon their arrival for his exhibit “Feel the Funk” at the Community Folk Art Center. Campbell’s show will be on display through Aug. 17. | Hanz Lionel Valbuena, Staff Photo

“It’s like Mount Rushmore, but for black people,” Campbell laughed. He recalled the difficulty of finalizing the concepts until he moved the sketches side by side to appear in one line, which reminded him of the national monument.

His process to create a piece typically takes about a week. He will start drawing out geometric shapes in a solid color until a composition is decided on. From there, layers of gradient shapes are added on top of one another until the work is complete. His works are inspired by local artist Michael Moody, as well as Pablo Picasso and Faith Ringgold.

“That’s why everything looks so smooth, the gradients add depth to it,” he said. “I just love using those, it takes the artwork to a whole new level.” 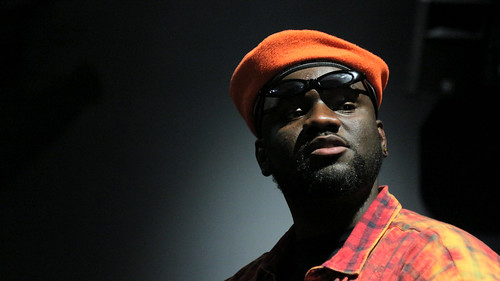 The artist’s works come in a time where black voices are continuously increasing in mass media, through various channels of activism, such as the Black Lives Matter movement and through storytelling like the film “Black Panther.” To him, it’s part and parcel of his own contribution to art.

“I named the series ‘Feel That Funk.’ My whole premise was back in the ’70s – [when] the black artist movement was going on. This was a time when black artists began to showcase their work across all mediums to further speak to everyday life of black people and what was going on for them at that time. And I think there has been a resurgence of that feeling, and I wanted to put my take on that,” he shared.

In the fall, Campbell will be furthering his studies at SUNY-Purchase, where he hopes to increase his exposure to other galleries. His work will be exhibited at the CFAC through Aug. 17.