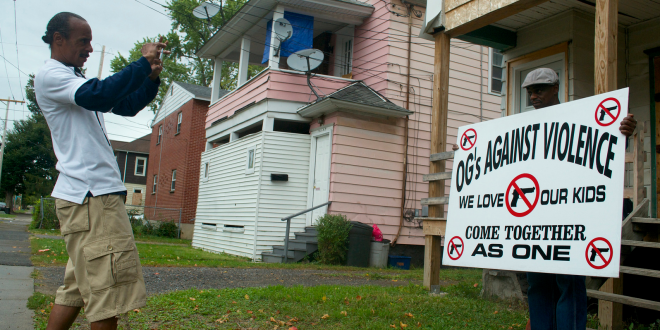 Plea: Say No to Guns

Standing in front of an abandoned house on Midland Avenue, a 52-year-old man holds up a white sign denouncing gun violence as kids and cars travel by him. In black Nikes, cargo shorts and a white polo, Clifford Ryan walks up and down the street, speaking to every person he encounters.

When it starts to rain, he walks up to the porch of the house and stands in front of its boarded-up windows, continuing his mission and raising his sign above his head periodically.

“Wherever they have a shooting, I go to the area,” Ryan said. “They really respect the movement, and they don’t shoot while I’m out here.” 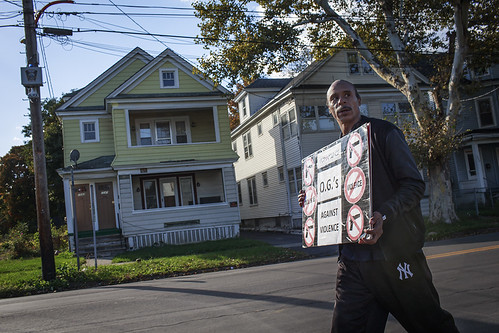 Clifford Ryan stands along the street to show off his sign to passing cars and speak with youth about abstaining from gun violence. | Photo by Michael Santiago

Several kids walk by after being let out of school. Some run over to have him take their picture with his sign. Others just nod or say, “Hey, O.G.!” — a reference to “original gangster.” Some scurry past with their heads down, but steal glances over their shoulders once they think they’re out of sight. School buses honk their approval as they pass.

Ryan, a Syracuse native, returned this summer from his life in Binghamton to advocate against gun violence. While he doesn’t consider himself an original gangster, he takes a term like “O.G.” and flips its meaning by hitting the streets as an “O.G. against violence.”

Organizations and individuals like Ryan are campaigning hard for a reduction in gun violence on the South Side. Two nonprofits are working together to alter the perception and reality of neighborhood violence and advocate for more help from the local government.

Aggie Lane, president and community outreach chair of the Urban Jobs Task Force, said she doesn’t think any one entity can solve the problems in Syracuse. The task force, which has recently lobbied for an ordinance requiring the city to reserve 20 percent of big construction jobs and public works contracts for Syracuse residents, recognizes a direct correlation between joblessness and violence, she said.

The materialistic world we live in sets up the desire to have things such as shoes, cars and clothes, Lane said. When there’s no way to obtain the money for those things, along with other basic needs to support a family, people will turn to other methods of making fast cash, she said.

“You’re going to go out in the street and look at ways to get it, and drugs have been a really good way,” Lane said. “The drug industry flourishes then — people come into the city to buy their drugs, and so people can make a lot of money very quickly. Then you’re defending your territory and you’re defending it with guns. So I’m thinking that if you can get some good jobs for folks, that can lessen the violence.”

Children learn by modeling, Lane said, and a cycle is created when children watch their parents go out and make a living by selling drugs, by selling people by way of prostitution, by selling weapons.

Mark Cass — executive director and organizer of ACTS, which stands for the Alliance of Communities Transforming Syracuse — said its newly established Community Violence Task Force combines the needs of the public with the ability of its members in order to push for legislative change. 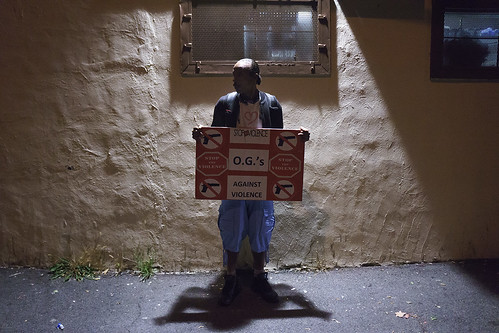 Clifford Ryan holds his sign late into the evening. | Photo by Michael Santiago

At a meeting in September that Ryans attended, the group decided to develop a program called Conflict Resolution Training, Cass said, a concept that since has evolved to be called Conflict Transformation Training.
“We really do try to identify specific  ideas,” he said. “We’re really about systemic change — which could be laws, practices, money. But understanding and having relationships with the people who live here is how we find solutions and work to put those solutions in place.”

For Lane, Ryan’s direct efforts make sense, and they’re not something every organization is capable of doing. He gets out there, she said, and he brings the sentiments of people he encounters into the legal and political world where change is planned and mobilized.

“Clifford came to our hearing last night, and he spoke about the hopelessness he sees on the street,” Lane said. “He tries to tell them there are people out there that do care, but he says a lot of the perception is hopelessness.”

People like Ryan help the issue by bringing the “back-room” efforts to the public sphere, Lane said.

Ryan explains his actions. “It’s important when you see me out here with these signs. I’m not selling dope, I’m not selling guns,” Ryan said. “You’re doing something for a purpose. That’s what’s wrong — you can’t be afraid to come out here and talk to your people.”

He wishes other members of his generation would have the courage to talk to the youth, Ryan said. The connections he’s forging and the empowerment he’s trying to implement are so vital to reverting the crime trend, he said. 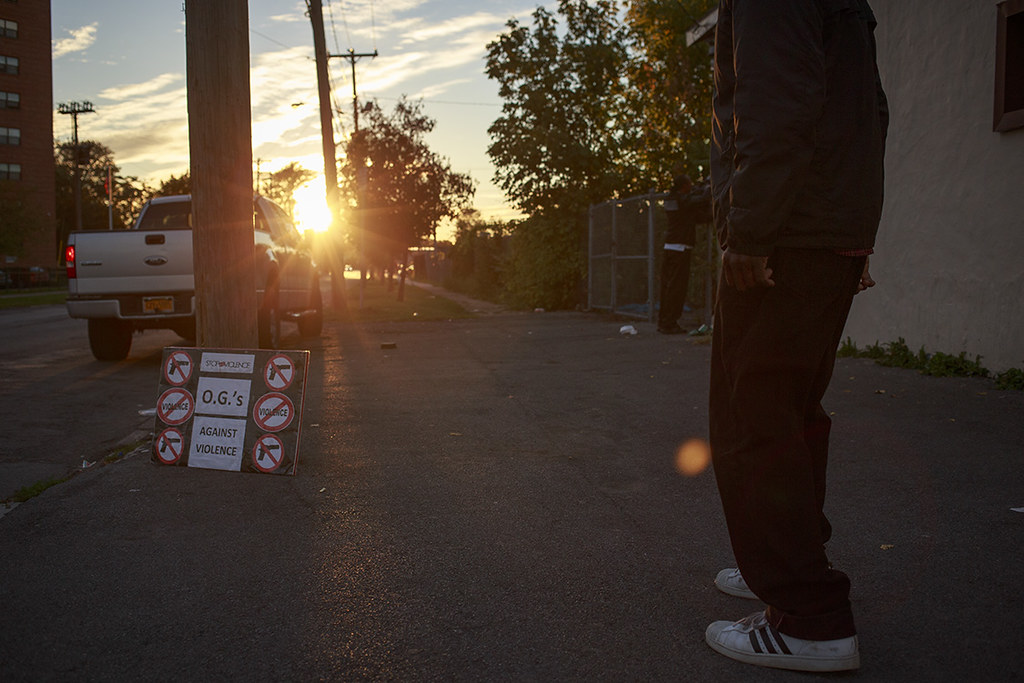