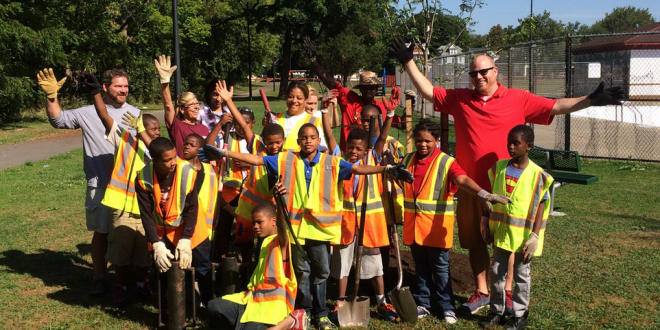 Community members of all ages work to revitalize a McKinley Park

Children sank shovels into the earth and tossed dirt onto tarps. The sound of laughter and spattering soil filled the air.

“You guys are doing great!” Diane Cooter, a member of a McKinley Park supporters group, yelled out as the children stomped dirt down at the base of freshly planted trees. “This is fantastic.”

This green-thumb work by 15 fourth- and fifth-grade students a few weeks back is meant to brighten up McKinley Park when spring breaks out next year.

The children — all from nearby McKinley Brighton Elementary School — planted 14 trees, a fresh addition to recent improvements aimed at making the seven-acre park more inviting to local residents.

“It’s very important because it brings life back into the community, and it lets the community see that people are invested in it and people care,” said Lazarus Sims, commissioner of Parks, Recreation and Youth Programs, and a former basketball player at Syracuse University.

The Southside Interfaith Community Development Corporation, a nonprofit group whose mission is to improve the community on the South Side, founded the all-volunteer McKinley Park Supporters, which is aimed at improving the park. 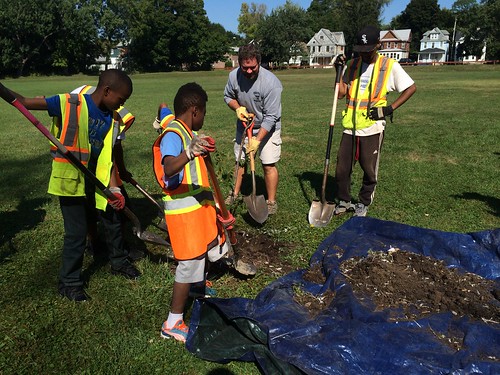 Children from McKinley Brighton Elementary school collaborated with community members to plant trees in McKinley Park at the end of September.

It came about several years ago when members met in a small group for coffee and conversation based around their idea of seven habits of the community — one of which was neighborhood improvement.

“We were trying to think what around here needs doing, and McKinley was perfect,” said Audrey Haskell, vice president of the interfaith organization and de facto leader of the McKinley Park Supporters.

In the past two years, working with the parks department, volunteers added benches, picnic tables and a flower box to the park. The playground equipment was repaired and repainted, and new entrance signs were added. A broken guardrail around the park was fixed and repainted by members of the community.

“It’s looking better,” said Shamika Surrey, who lives across the street from McKinley Park. “It really brought a lot of life to the park.”

By planting trees, the elementary school children worked to replace trees that were destroyed last year by people breaking off the branches. This time, the trees weren’t planted in a straight line to make it more difficult to harm them all at once.

The park supporters wanted the children involved so they’ll feel the park belongs to them.
“Maybe they’ll take some ownership and protect them a little bit,” Haskell said.

In a sign that just such a thing might be taking place, one young boy spent the day walking around the park calling himself the Lorax, in reference to the Dr. Seuss character who speaks for the trees.

Karreem Wofford, who has lived near the park all his life and joined the children when he noticed them planting trees, said the park is important to the community.

“It’s time for a different look, for a change for our kids,” he said. “Because they come down here looking for stuff to do and when they run out of stuff to do they go to the corners.”

For the first time in 35 years, the park finally looks different, Wofford said.

Haskell said she wants to replace the old playground equipment in the park, and her goal is to have the park be compliant with the Americans with Disabilities Act regulations. Wofford would like to see a pavilion added like the one at Kirk Park.

The parks department is focused on the playground equipment and opening the pool each summer, Sims said.

The improvements at McKinley Park have had a resounding impact throughout the community, Haskell said. She has seen neighbors clean up their houses and yards and take better care of the park on their own.

Persuading the city to add money to the park is difficult in a time of lean budgets, Haskell said. Even the most recent additions to the park are just the beginning of a bigger revitalization of McKinley Park, she added.

“I’ve watched this park go from wonderful to pretty bad to worse and then see it come back little by little,” Haskell said.

“It’s been encouraging. We’re working at it. We haven’t given up.”