Developers and private citizens alike have the opportunity to buy a house in Syracuse right now for as low as one dollar.

By using its power to sell tax-delinquent properties, the Syracuse Common Council has been working to fight the city’s vacant housing problem.

Non-profit groups such as Home HeadQuarters, Housing Visions and Syracuse Model Neighborhood Corporation use federal grant money to renovate vacant buildings and either sell them or turn them into rental property for low-income citizens.

In its meetings on Sept. 12 and 26, the council approved the sale of 37 such properties. Most of these have been to Home HeadQuarters as part of a planned “Kings Park Homes” project on Syracuse’s South Side, said Councilor Jean Kessner. The buildings are primarily located on or near West Borden Avenue near South Salina Street.

“We are always looking to get state or federal funding for projects like this that allow us to fix up empty houses, because if we don’t sell them, they just die,” Kessner added.

Vacant houses on can be seen scattered throughout the South Side including this home at 135 W. Borden St. This property on West Borden will be part of the planned Kings Park Homes project. -- Photo by Joe Genco

The two non-profit groups are applying for federal funding from New York State by the end of October as part of Gov. Andrew Cuomo’s plan to invest $1 billion in the state’s economic development. If all goes according to plan, work will begin in spring 2012, and the project will be completed by the end of 2013, according to Lockwood.

The project calls for demolishing four houses, constructing eight new ones and rehabilitating other buildings to be either sold or rented. Home HeadQuarters has purchased all the properties because it typically deals with buying and selling real estate, Lockwood said.

While large projects like this one can make a big difference for a neighborhood, these non-profits also work on individual houses every year to improve the city little by little.

Syracuse Model Neighborhood Corporation, in addition to managing about 100 rental properties on the South Side, uses federal funding to fix up and sell about two or three houses a year, said executive director Tom Francis.

The corporation recently purchased two vacant houses to fix up and sell in about a year. Both houses were neglected and then taken by the city for non-payment of taxes, Francis said.

One of the biggest problems with vacant houses in the city is that people break into them and strip them of scrap metal or anything valuable. Francis said this is a problem that the city could be doing more to prevent.

“It seems impossible that some junker can come into the junkyard with a bunch of copper every week and no one asks questions or wonders where it is coming from,” he said.

Private citizens can also purchase vacant houses or empty lots to fix them up to turn a profit or for private use, Councilor Kessner said. All they need to do is apply to the city Finance Department, and they will likely be sold the property for one dollar plus the price to have the lot appraised, which is typically $150. After the Common Council approves the sale, there is a 60-day wait period for the owner of the house to pay off its back taxes before the deed is transferred to the new owner, who is then responsible for paying the taxes.

The city is happy to see people improve neighborhoods by buying vacant houses, as long as they actually improve the properties, Kessner said.

“We always look to see what results they get, if they don’t end up developing the property, we won’t sell to them again,” she said.

Vacant houses are one of the city’s biggest problems, Prehn believes. “Vacant houses are used as hangouts, as drug dealing, using and stashing places, there’s loitering, fights, you name it; and it brings down neighborhoods.” 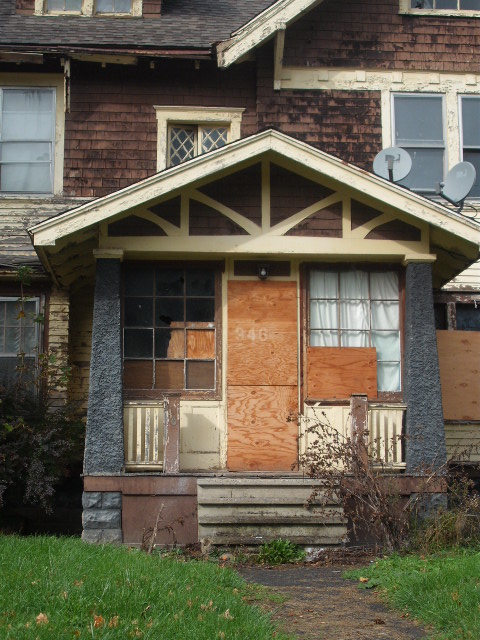 Vacant houses on can be seen scattered throughout the South Side including this home at 346 Kennedy St. -- Photo by Joe Genco

— Story by Joe Genco, Newhouse student and The Stand contributor