With one decade under his belt, Pastor Frankie Jackson and his congregation celebrated their first 10 years this summer with loud rejoicing … much in the same manner as how several describe the ministry’s beginning. 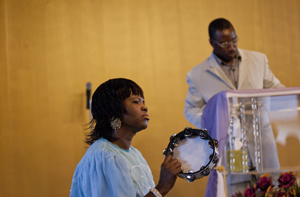 Pastor Frankie Jackson met his wife, Sheba, on a college trip to West Ghana. Here, Sheba Jackson praises while her husband preaches during a Sunday service in July. -- Jeremiah Howell

From a single rented room to various temporary locations along the way, Syracuse Salt of the Earth Ministries has found a home at 320 W. Onondaga St. since the end of December 2009. To ensure the site remains as the church’s permanent location, Pastor Jackson and the congregation continue efforts to raise more than $100,000 to own the building.

The summer celebration was one recent effort, with all donations added to the building fund. During the anniversary service when Frankie’s brother, Deacon Alexander Jackson, stood up to speak, he highlighted SSEM’s humble beginnings. With only a handful to help out, each played many roles in growing the congregation. His extra role: shuttle guy.

SSEM first shared space with the First Presbyterian Church near South Avenue and held its weekly Sunday service in a small upstairs room above the Presbyterian congregation. As time went on and the congregation grew, so did the praise volume.

“Our service started at 11 a.m. just as theirs was ending,” Pastor Jackson explained. “And at first we received compliments, like ‘You guys sound like you’re having a great time.’ But about a month later, we received a notice to find a new location.” 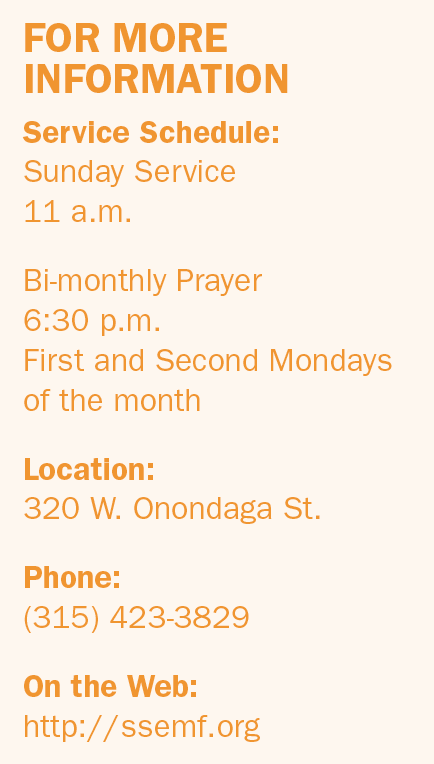 The growing congregation and rambunctious praise was determined as the likely culprit.

Added Pastor Jackson: “And who am I to try and squash my congregation’s praise.”

The same enthusiasm was felt during the June 25 special service when SSEM celebrated its 10-year anniversary.

“I feel God in this room,” exclaimed guest speaker Pastor Willie J. Graham from Bethlehem Revival Temple. A well-known Syracuse pastor, Graham spoke during the celebration and recalled when the Jacksons first started, noting, “They used to talk to me all the time.”

“When the phone rang, if we had caller I.D. then, I’d probably wouldn’t (have) answered. But when you’re new, you need advice,” he recalled fondly. “I was happy to give it, because when I started, I needed help too.”

Graham was one of the first to provide Jackson with guidance, helping to explain how to get incorporated and the ins and outs of running a church.

“He gave us the tools we needed to get established and was always there with advice,” Pastor Jackson said.

FOCUS ON FUNDRAISING
Since that first location, the church has moved five times, landing where it now resides on the edge of the west corner of the South Side. The current focus is to raise money so the church can finally own its own structure. This adds fundraiser to the long list of multiple roles Pastor Jackson, 43, holds. During one 11 a.m. Sunday service, his many roles materialize: teacher, preacher, praiser of God, promoter and even drummer. 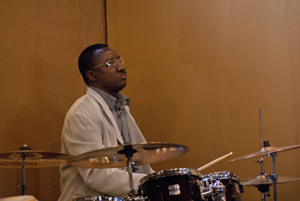 Pastor Frankie Jackson takes the lead on the drum set during a welcome praise before a Sunday service. -- Jeremiah Howell

While Minister Tina Taylor preaches the day’s greeting, Pastor Jackson splits his time between swaying and clapping to the music from the first row to jumping behind a drum set to add to the growing volume of music backing Taylor’s welcome.

Speaking with emphasis when needed, Pastor Jackson delivers a sermon on creating a culture of healing over a culture of pain to more than 50 frequent members and a handful of new visitors. “God brought you here today,” he reminds everyone.

Jackson’s focus and success is always to offer help to those in his congregation and guidance to new members. On this day, he says, “If God is going to be allowed to effect healing, he’s got to be allowed to perform surgery on your life.”

RECEIVING A CALLING
Pastor Jackson says his passionate heart comes from his mother, allowing his calling from God to preach to come that much easier. He spent 13 years working at churches as a licensed minister working with youth, but God kept calling him to start his own.

“I just kept rejecting it, but I kept being told that I should do more,” he said.

With his wife’s encouragement and the grace of God, Pastor Jackson moved out of his comfort zone to begin his own church. To start, he developed a purpose.

“You’ve gotta have a reason why, because God doesn’t do anything without a reason,” he said.

His stated purpose: to guide, train and disciple for the work of the king.

“Our vision has expanded since those early days, but the core is still the same,” he added.

HUMBLE BEGINNINGS
Pastor Jackson was born in Chicago, moved to Central New York at the age of 4 and grew up most of his life on Syracuse’s South Side.

He remembers the neighborhood even before the Southwest Community Center was built, recalling fondly sneaking into the center’s construction site to catch frogs. As he grew older, he developed his leadership skills and passion to work with youth. At 14, he took a job at the center as a mentor to younger boys.

He is one of 10 brothers and sisters and attended church with his mother each Sunday. During one winter break while in college, he joined his roommate on a trip to his roommate’s homeland in West Ghana. While at a church service there, he met his future wife, Sheba Rockson. He returned the following year and the two married; now the pair oversees the SSEM and has four children.

Pastor Jackson believes his mandate is to help others rediscover, restore and reconcile their relationship with God the Father through the power of preaching and teaching. 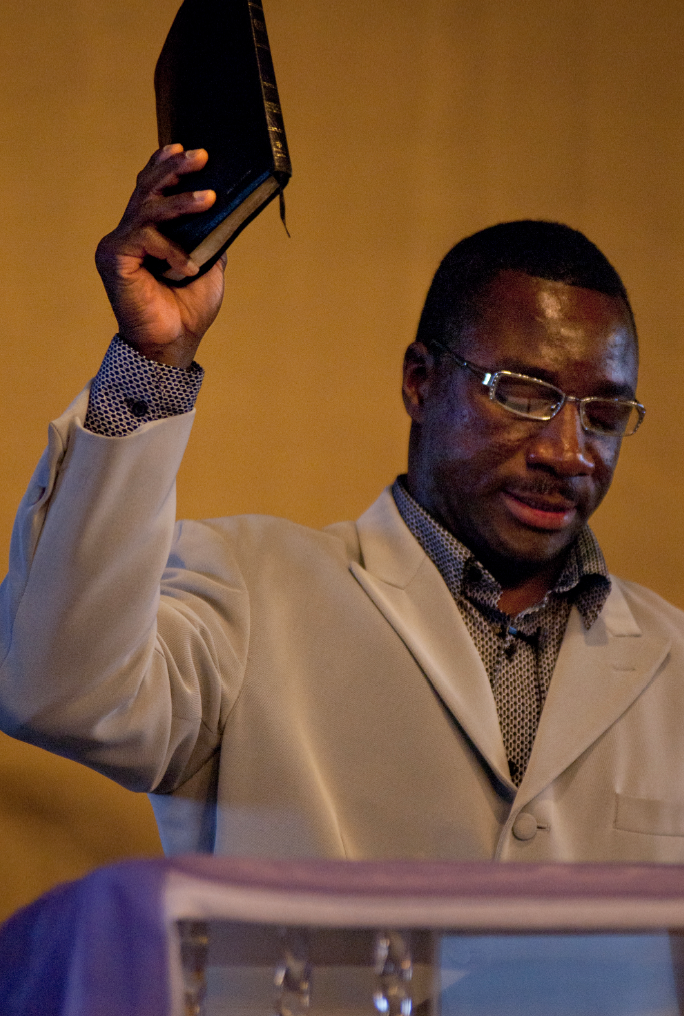 Pastor Frankie Jackson prepares to read from Scripture at a Sunday service in July. -- Jeremiah Howell

NEXT 10 YEARS
Plans to continue to fundraise will also help to renovate the building to add a room for youth, add a basketball hoop outside and upgrade the basement with a banquet area for weddings and celebrations. The area would include a kitchen and space for teens to meet.

The main future ambition of SSEM is “to build bridges,” says Pastor Jackson.

To do this, he wants the church to continue to expand its programs to reach those in need to help them become self-sufficient and for his church’s programs to be a model for other churches.

“We don’t want to just be another program, but an effective program,” he said.

Several in the church each run specific outreach programs to help women in need or those in recovery. Pastor Jackson’s main outreach effort is working with men at the Rescue Mission.

Another ambition is for his church to become global by doing mission work and reaching a point where members of his congregation can respond to disasters.